Women dare to dance in Gaza

Female dance troupes that perform at weddings are increasingly popular in Gaza as women try to earn income for themselves and their families. 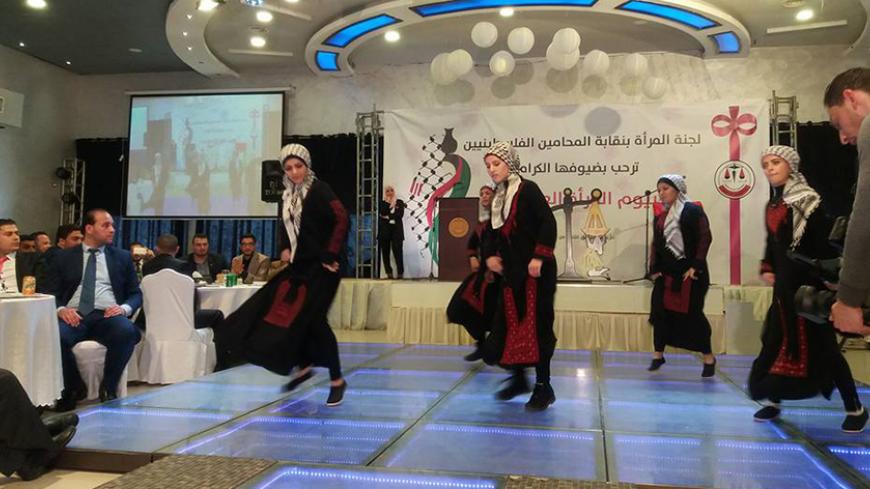 GAZA CITY, Gaza Strip — Women in Gaza have increasingly begun forming and performing as all-female dance troupes to perform at local Muslim and Christian weddings. Their initiative has been driven in part by a desire to earn money, given the lack of job opportunities and Gaza's high rates of unemployment, as well as to make space for women in a conservative society only accustomed to male dance troupes.

According to statistics released by the Palestinian Central Bureau of Statistics on March 7, female unemployment in Gaza and the West Bank stood at 44.7% at the end of 2016, compared to male unemployment, which totaled 22.2%. Women in Gaza tend to work in jobs and professions where they are not around men, including as teachers in girls schools and in sewing and embroidery enterprises.

Mahmoud Salem is busy planning his wedding, scheduled for April 5 at a hotel in Gaza City. He had already booked a male-only fadous band, when he decided to also hire a female troupe for a women's celebration of his marriage. The female dancers charge the same as the men, about $250.

Salem told Al-Monitor, “I decided to hire the female troupe at the request of my mother, who had seen them perform at a wedding in Gaza and was very impressed by them. To be honest, I find it a bit odd and out of the ordinary.”

Wedding celebrations in Palestinian society are traditionally segregated by gender. The groom organizes a wedding party for men to celebrate with him after the ceremony. The following night, the groom appears at a wedding party for women that he also organizes. Aside from him, only women attend this event celebrating the bride and groom.

In the past, women from the bride and groom’s sides would celebrate by performing and dancing themselves at their celebration. That tradition continues today, but the all-women dance troupes also perform for added entertainment. Male troupes only dance at men's parties.

Hadeel Salem, Mahmoud’s mother, told Al-Monitor that she had a hard time convincing her son to hire the female dance troupe, adding, “Our society believes it is shameful for women to be paid for doing such performances, which involve body movements. But the female dance troupes do not violate the sanctity of these traditions. They wear conservative outfits and deliver a beautiful artistic performance at the women-only wedding celebrations.”

Al-Akeber is the most famous female dance troupe that performs at weddings. The group, formed in 2010, was the first female troupe in Gaza. It only began to grow in popularity a few years ago, as it took some time for the community to accept the idea of women performing at weddings.

Hiba al-Hindi, the troupe’s manager, explained to Al-Monitor that her group broke the mold in providing a special touch to weddings. According to her, most attendees enjoy the troupe’s different dances.

The members of al-Akeber begin their performance with a celebration of the bride and groom by dancing around them with swords and drums. They then perform the dabke and other traditional folk dances. When it is time to cut the cake, they present a “cake show,” dancing around the cake with swords to generate excitement and a festive atmosphere.

Sixty dancers ranging from 13 to 23 years of age perform with al-Akeber. The troupe is sometimes booked for several weddings at the same time, performing in groups of six. The charge for hiring a troupe ranges between $135 and $270 per wedding, depending on the number of dances.

Hindi declined to reveal how much each dancer earns, but did say that they receive monthly salaries that help support them and their families. Each dancer joins the troupe for different reasons, she said. Some want to pursue a career using their dancing talent, while others join to pay for their education. Some want to help their families financially.

Mouin Rajab, economics professor at al-Azhar University in Gaza, explained that with Gaza's economic situation being so dire, the heads of households often cannot provide for their families’ needs, driving young women to find work to bring in income.

“Women do not join such groups as a hobby,” Rajab told Al-Monitor. “They are looking for sources of income to help provide for basic needs that the head of the family cannot cover, most typically the family’s educational and health needs.”

Rabab, who works with al-Akeber and declined to provide her full name, told Al-Monitor that she had turned down a marriage proposal and decided instead to join the troupe to help her family of seven with their basic needs. Rabab performs the zumba and dabke at weddings.

“I’ve had this artistic talent ever since I was a little girl, and I was able to develop it over the years, until I could perform as well as train other girls,” Rabab said.

Naha, who performs with a different dance troupe that she preferred not to divulge along with her full name, told Al-Monitor, “Our troupe tries to compete with other female groups by doing both [Middle Eastern] and foreign dances. I, for example, dance the samba. Other women specialize in different dances, such as salsa or belly dancing.”

Naha joined a dance troupe because she wants to pay for her law degree. “My father cannot pay my college tuition by himself, so I am trying to help him out,” she explained. Naha also said that she has been criticized by her community, despite having her parents’ approval to dance.

“I do not think it is shameful,” Naha said. “My performances spread joy and happiness among the bride and groom and their female guests.”

Further dismissing society’s negative outlook, Naha asserted, “This will not stand in the way of the source of my livelihood, nor will it stop me from developing my talent and achieving fame in this field.”