El-Funoun is a dance troupe whose performances underscore the importance of Palestinian folk art while combining cultural authenticity and modernity — with the idea that art is a part of the revolutionary and popular movement against the occupation. 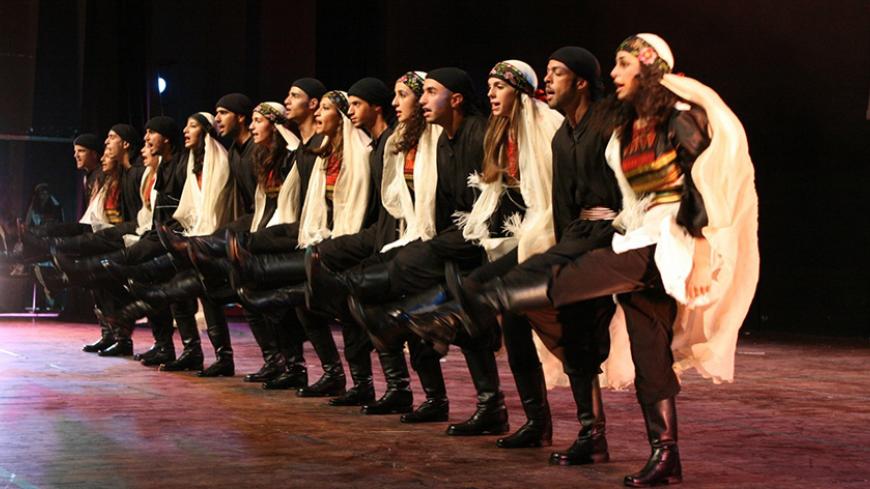 El-Funoun, whose members have volunteered their work since its inception and continue to do so, was the first troupe for mixed folk arts in the West Bank after the 1967 occupation. It has performed nearly 1,000 shows locally, regionally and internationally, and produced 15 performances that combine cultural authenticity and modernity.

The three co-founders of El-Funoun said there are reasons other than the preservation of Palestinian folklore behind the group. Co-founder Yaacoub told Al-Monitor, “We decided to establish El-Funoun to be part of the change, and because we believe that art is a part of the revolutionary and popular movement against the [Israeli] occupation, and an authentic component of the popular fabric and its national and cultural aspirations, under the prevailing secrecy surrounding cultural events given the occupation harassment.”

El-Funoun’s artistic vision is inspired from historical folklore to develop contemporary folk art that contributes to bringing about a change in society and individuals. “We have believed from the beginning that art under the occupation cannot be neutral," Yaacoub said, "but it has to have an enlightening and educational role and to favor national causes, based on our belief that our work is part of the resistance to the occupation.”

Khaled Katamesh, business manager of El-Funoun, told Al-Monitor that since the dance troupe’s inception in 1979 and up until 1984, "El-Funoun shows were inspired by the rural and civic reality [in Palestine], without any additions or changes. This was clear in the folkloric choreographies in 1982. We used to meet with the peasants in the villages, listen to the songs they sang during the harvest seasons and weddings, and perform them on stage in the city.”

He added, “Until 1984, our work was more like doing fieldwork and being in direct contact with the people, and far from being a creative work of art. This has, however, helped us be accepted by the people.”

The Palestinian dabke is a key component of the choreographies performed by El-Funoun. “The dabke is a key part of the national and cultural identity," Katamesh told Al-Monitor, "and therefore, its preservation under the occupation is a duty, in order for us to confirm our presence on our land, since it is part of the struggle that dovetails with the [country’s] revolutionary surge amid the occupation’s thwarting and shutdown of folk and traditional festivals.”

In 1986, the troupe’s prior successes converged into the new show called "Misha’l" (Torch), which was inspired by the Palestinian reality under Ottoman rule. However, the performance did carry signs of a new orientation for dabke on stage, which was subjected to the academic rules that apply to drama and the arts. The show also re-instrumentalized traditional songs.

Despite the popular successes it achieved, and to top off the harassment by Israeli authorities, the troupe was subjected to pressure at the local level, most notably societal pressures, given that girls were not allowed to participate in the performances, as well as the criticism over introducing some modernity to the folklore.

Yaacoub said that the troupe remains resolved and determined to continue its work despite the strikes and being targeted by Israeli authorities, "which confirms our view that there is not a neutral art under the occupation.”

For his part, Darwish said, “Society did not accept that women get a job and the participation of girls in the troupe raised criticism. We were sometimes prevented from performing and we were assaulted, as happened in Hebron in 1984. Yet, our belief in enlightening [the audience] and [effecting] change has encouraged us to keep working.”

Yaacoub added that criticism is normal. “We have a message that we represent through the ideas tackled on stage. So, there must be critics, particularly since our message is part of their heritage and presence.”

Yaacoub added, “The occupation’s blows have strengthened the troupe, proved its message right and reinforced our popularity. This took place in 1989 during the preparations to produce a work of art dubbed 'Marj ibn ‘Amer,' two years after the outbreak of the first intifada. The Israeli army arrested 14 out of 16 dancers of the troupe, in addition to the songwriter, musician and some singers.”

El-Funoun currently consists of 122 volunteers, including 80 female and male dancers divided into two age groups (12-18 and over 18). Over the past year, they performed 19 shows in Palestine, and two other shows in Canada and Jordan. The troupe also plans a show in Egypt and two in Milan, Italy.

“The troupe has an audience abroad, and we are open to everyone and to all experiences, cultures and different dance styles, which are drawn on in order to develop the Palestinian dance while preserving Palestine’s artistic identity,” Darwish said. “We have succeeded in communicating the Palestinian dabke to the world. The European countries have become very familiar with it and they love it.”

On March 6, El-Funoun celebrated its 36th anniversary, and, according to Yaacoub and Katamesh, is looking forward to achieve greater success through contemporary creative choreography incorporating the Palestinian identity and cultural history.