Palestinians say no to cultural monopoly

A Palestinian Foreign Ministry memo favoring the selection of one particular dance troupe for international performances has become a scandal. 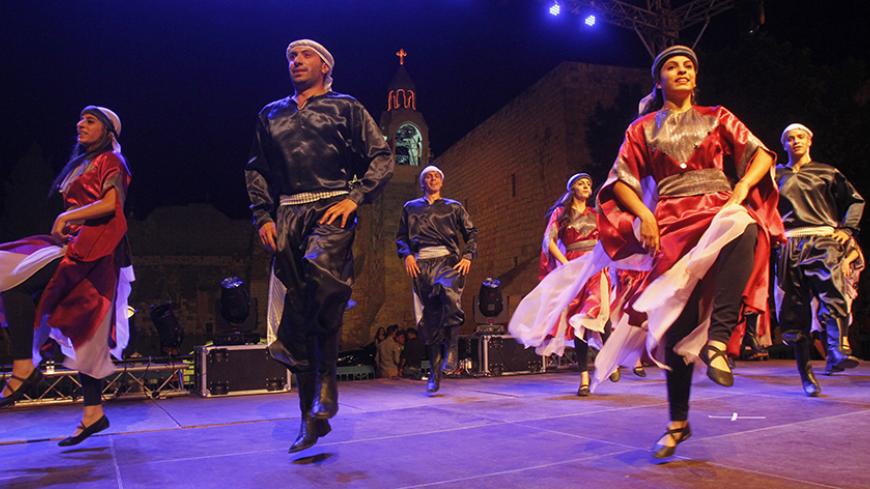 Palestinian dancers perform during celebrations in front of the Church of the Nativity, the traditional birthplace of Jesus Christ, in Bethlehem, West Bank, July 7, 2012. - AFP PHOTO/MUSA AL-SHAER

The summer months are the high season for cultural activities in Palestine, when folkloric troupes, dabke dance groups and theater companies put on performances for large audiences. The Palestinian Tourism Ministry has a dedicated webpage promoting such artistic, musical and other cultural events.

Once summer passes, these artistic groups become focused on invitations to dance and perform in world capitals and at international festivals. Palestinian cultural institutions dream of performing in major festivals and in front of foreign and Arab audiences as well as Palestinian crowds in the diaspora. These institutions compete to represent Palestine, and they pride themselves in the number of festivals that invite them to appear.

This summer, scandal ensued after Palestinian artists discovered that their own Foreign Ministry had recommended one troupe above all others for performances abroad. In a June 30 memo from Foreign Minister Riyad Malki, all Palestinian embassies around the world were informed that if asked to recommend a folkloric dance troupe, they should suggest al-Funoun al-Shaabiya, affiliated with the Istiqlal (Independence) University in Jericho. The university is a military academy headed by Tawfiq Tirawi, the former head of the General Intelligence Service and member of Fatah's Central Committee.

Eman Hamouri, the head of the Popular Art Centre, was quoted Aug. 11 by Maan News, as arguing, “This is a cultural issue, and it should be handled by the Ministry of Culture.” A few days later, on Aug. 13, a number of artists and dance companies sent a letter of protest to Prime Minister Rami Hamdallah. Among other things, they, too, noted that issues of culture and art are the domain of the Culture Ministry, not the Foreign Ministry, and called on the prime minister to intervene and override the memo. Hamdallah has not yet publicly responded to the letter or the issue.

Seventy-eight artists and cultural centers issued a strong statement against the Foreign Ministry memo on Aug. 15. Al-Monitor spoke to representatives of several artistic groups who expressed their dissatisfaction with the Foreign Ministry's intervention in the Palestinian cultural scene.

There is some uncertainty in regard to when the letter from the Foreign Ministry was first issued. Culture Minister Ihab Bseiso said that the original memo dates to 2015, which is before he took office. On Aug. 11, he told local radio station 24 FM, “Nevertheless, I will check with the Ministry of Foreign Affairs to try and understand what the background of that memo is.”

In other remarks to the press, Bseiso insisted that he supports all Palestinian artistic groups and acknowledged how hard they work to overcome the challenges facing them in presenting Palestinian culture. “Our ministry will work to ensure that the rights of all artists and groups can represent Palestine [around the world] and reflect the Palestinian artistic narrative,” Bseiso told the Hadf news website Aug. 13.

Neeman al-Qaq, the artistic director of the Istiqlal University dance troupe, spoke at length to Al-Monitor, revealing that they had heard about the memo from the media. “We were in Oman when I saw the comments on Facebook by fellow artists,” he said. “We had nothing to do with this recommendation.” Although Qaq distanced his group from the memo, he had no problem with the concept itself, stating, “We are trying to culturally bring back the glorious days of Palestine.”

There is also confusion over the memo as it refers to the Istiqlal troupe as al-Funoun al-Shaabiya, which is also the name of one of the leading and oldest Palestinian musical companies, based in al-Bireh.

Qaq, who along with his father grew up dancing with the al-Bireh-based al-Funoun, said that his Istiqlal University troupe has in six years traveled more than al-Bireh's troupe has in its 36 years of existence. “We travel anywhere we are invited, we don’t ask for money and we don’t care if we are hosted in a three-star or a five-star hotel,” Qaq said.

The prime minister’s office directed Al-Monitor to the respective ministries, but efforts to obtain reactions from the Ministry of Culture and the Foreign Ministry were unsuccessful.

Art and other aspects of culture play a big role in Palestinian society and are a major part of efforts to share national Palestinian folklore, which speaks volumes about the history of Palestinians on their land. The importance of reflecting the breadth and width of Palestinian art and culture is important not only for its own value, but also in recognizing its richness and plurality. If asked to recommend a particular folkloric group, it would therefore seem appropriate for Palestinian embassies to provide information on the leading troupes, not favoring one of them. That the Foreign Ministry has chosen to recommend a single folkloric group at the expense of all others has produced major push back, taking it and the Culture Ministry by surprise.