The Iraqi national dance troupe is struggling to survive amid a lack of financial support and social taboos around dancing. 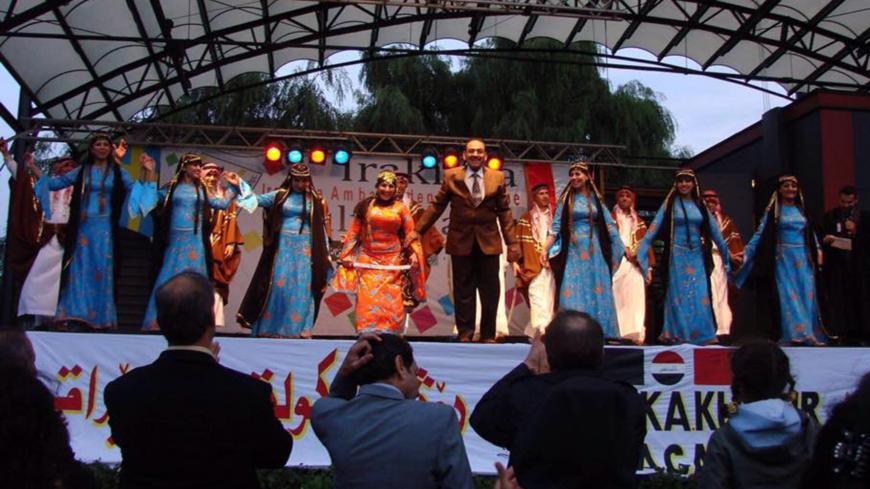 Members of the Iraqi National Troupe of Folk Art are seen on stage in a picture uploaded Aug. 25, 2017. - Facebook/foadthanon

BAGHDAD — At a recent festival, the Iraqi National Troupe of Folk Art wanted to pay homage to the liberation of Mosul through a special dance in the presence of 1,600 people, but some politicians who thought dancing was incompatible with Islam simply got up and walked out.

The walkout happened while the troupe performed a dance representing the liberation of Mosul from the Islamic State during the ceremony on the 62nd anniversary of the founding of Iraqi cinema in Baghdad on Aug. 16. In July of this year the Iraqi forces liberated Mosul, which was held by IS since 2014.

Such snubbing toward dancing is not uncommon in Iraq. Fouad Zanoun, the director of the troupe, told Al-Monitor, “Some prominent politicians and officials who attend festivals leave as soon as the troupe starts performing as they believe this is in direct conflict with religious and social norms.”

In a country like Iraq, governed by strict religious customs and traditions and where conservative Islamist parties are influential, the work of the Iraqi National Troupe of Folk Art is seen as an important cultural step to break the taboo of dancing, which is regarded as haram, or immoral, on religious grounds. “Many people who are educated and culturally aware praise and support the troupe as an artistic and cultural band,” Zanoun said.

But the support is hardly enough to keep the troupe performing. “There is limited support from the Ministry of Culture, which is not enough for the troupe’s needs. We need more material and moral support to be able to perform and convey a clear message in representing the Iraqi folklore and heritage at home and abroad,” Zanoun said.

Yet it is becoming difficult to keep up the performances at home, let alone abroad. Since 2015, the Babylon Festival for International Cultures & Arts has not included any dance. But Undersecretary of the Ministry of Culture Fawzi Atrushi denied April 27 that this was due to religious conservatism. He said, “Some are trying to establish a link between religion and the prohibition of singing, music and dancing.”

The troupe was founded in 1971 by the Iraqi Culture Ministry's Cinema and Theater Department with the aim of spreading and promoting folk arts in a high artistic style inspired by Iraqi folklore, which represents all sects and ethnicities. “Unlike what some conservative people believe, our choreographies are without a hint of indecency. Our dances are inspired by Iraq’s heritage, music and folkloric clothes that are common for Iraqi sects and ethnic groups,” Iyad Ahmad Abdel Rahman, a member of the band, told Al-Monitor.

Choreographer and designer Hanaa Abdalla, who has been with the troupe for five years, told Al-Monitor, “The group’s performance has declined since 2003 because of the security and political events that have gripped the country. Like any other cultural groups in Iraq and the area, our troupe fell victim to the rising influence of religious and conservative movements that see dancing and arts as taboo. The biggest threat to the troupe is the decline in awareness of the importance of art and creativity, which is reflected in the low turnout for our shows.”

Conservatism, lack of financial support and lack of awareness about the significance of art makes it difficult to maintain the troupe, let alone enlarge it. Very few female dancers applied for the job when the troupe announced Aug. 3 that it is recruiting young female dancers.

Salaries are far from competitive, as both Zanoun and Abdalla pointed out. Abdalla believes that to progress, the troupe needs enough support from the Ministry of Culture, "mainly a raise in the salaries of the band’s members and other attractive incentives for new dancers who would want to join.”

She added, “The low salaries of dancers — $400 a month — are not a good incentive for young men and women to join the group. Besides the financial problems, the Iraqi media outlets — especially the semiofficial Iraqi channels — do not cover any of the band’s works and completely ignore their shows.”

Both troupe members and cultural circles underline the role the troupe plays in maintaining Iraq’s folkloric heritage and the dance traditions of different ethnic groups. Riyadh al-Gharib, a member of the Union of Writers and Authors in Iraq, told Al-Monitor, “Since its foundation, the Iraqi National Troupe of Folk Art has represented Iraq culturally in many international festivals — to promote our culture, history and heritage.”

Abdalla said, “The communities who do not have national groups to represent their history and folklore lose greatly in introducing their culture to other peoples.”

Another member in the band, Adel Luaibi, told Al-Monitor, “The Iraqi National Troupe of Folk Art is not merely a dance group but a school for dance and body expression arts. Iraq lacks a national dance school or institute. The troupe offers dance lessons for new members.”

Iraq is a country of rich heritage and culture. Not only is the troupe a school for dancing, but it keeps up the tradition of folk dancing, contributing at the same time to promote Iraq’s diverse heritage, customs and traditions through its expressive choreographies.