Gaza's Dom community is looked down upon and discrimated against by the broader population. 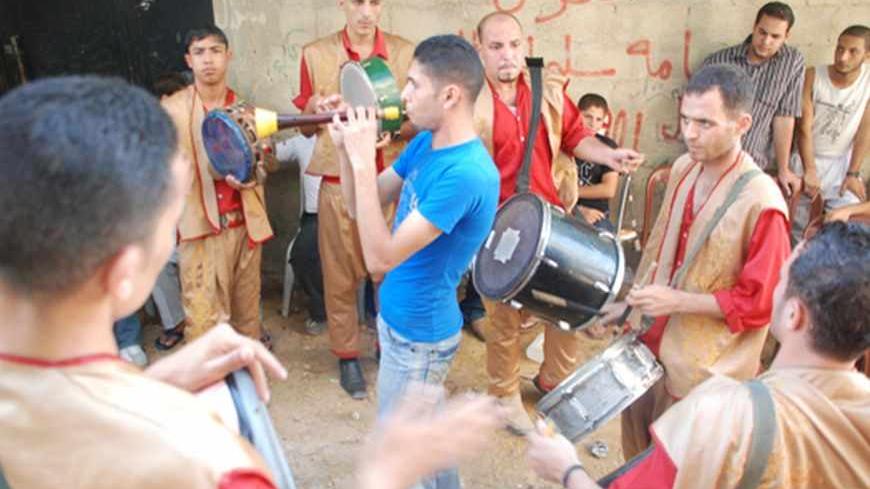 Adorned with bright patterns faded by the years, part of a belly dancing outfit appears from an old closet. Zoohoor has not worn the outfit for a long time. To be specific, not since the start of the second intifada in late 2000.

Zoohoor used to dance. Her feelings about it are a mix of guilt and pride. She first boasted to Al-Monitor, “I learned to dance by myself, and I was a good dancer. I started dancing when I was 16.” Later, she revealed, “I repented, and now I pray.” Dancing is not the only thing toward which 31-year-old Zoohoor expresses contradictory feelings of pride and shame. These feelings are also fed by her being a Dom girl.

“I am proud to be a Dom girl, and I say this publicly. Sometimes I feel reluctant because of the shock with which people react, but then I pluck up the courage, raise my head and admit that I am a Dom girl,” Zoohoor asserted.

The Dom are counted among the people commonly referred to as Gypsies, who live around the world. According to a recent study, linguistic theorists have linked Domari, the Dom's language, to the Punjabi dialect of Hindi and therefore believe the Dom's ancestors originated in northwestern India and migrated east. The Dom settled in the Middle East, while those who settled in Europe are Romani.

Zoohoor is not the only member of her family who formerly danced. At one time, her aunt Ferial danced at celebrations in houses across the Gaza Strip. She had dozens of outfits of various colors and earned large amounts of money.

Dina, 20, is also a Dom and confirms that for her people, dancing is not unethical. She dances, but then she returns home. She does not engage in relations with men, and lives by the moral standards taught to her by her mother.

Art and singing are part of Dom culture and heritage, but Dina does not like acknowledging this history. She blames it for the isolation of her people and the injustices that they endure. She told Al-Monitor, “I walk in the street, and I hear people whispering, ‘That is a Dom girl,’ that is, a dancer of loose morals, and this embarrasses me a lot, but I try to disregard their comments.”

Isolation and racism are not the only problems affecting Dina. She rarely leaves the area where she lives, a section in northern Gaza called Dom Alley. Dina also suffers from matters of the heart. As a Dom girl, her suffering is manifold.

She had a three-year relationship with a young, non-Dom man, but he was forced to leave her because his family refused to let him marry a Dom. His breaking up with her broke Dina's heart.

Her 19-year-old brother, Salim, may have acted more wisely. He has not told his lover that he is a Dom. He revealed to Al-Monitor, “If she knew I am a Dom, I am sure she would dump me. Our society adopts a different attitude as soon as they know my origins. I suffered a lot in school because of this discrimination.”

Asmahan is a Dom who not only lost her lover, when she was made to marry a relative, but also her job because of her ethnicity. She hid her identity from her colleagues, but when she invited them to her wedding, they immediately understood that their customs were different from other people in Gaza. For a start, Dom weddings are mixed, with men and women singing, dancing and playing music together.

“My heart sank while I was sitting in the bride’s chair. I saw their faces changing when they realized I was a Dom girl. Since that time, I haven’t returned to work, and our financial situation is dire. I believe that our fathers were unjust to us when they chose art as a profession. In the eyes of society we are religious and social degenerates, although in the past we used to be seen as an example of creativity and ethics,” Asmahan, 22, confided to Al-Monitor.

Asmahan agreed with Zoohoor and Dina that Gaza has changed. People from different social classes no longer wish to marry them, although it was a common occurrence in the past. Moral and religious prejudices have become even more rigid.

The Dom are not represented in parliament or in any of the political factions or institutions. They do not benefit from the international aid sent to the Palestinian people of Gaza. It is as if where they live is invisible to the broader community and the government. Some Dom women have, therefore, begun begging in the streets, while the men find work in “fadous,” popular male-only groups who play drums and march during wedding processions.

Zein, a 40-year-old Dom, told Al-Monitor that she left Gaza at one point to spend a number of years in Jordan. She said Dom people are treated better in Jordan, although racism existed there as well. The Dom have one representative in parliament, and there are also Dom who have become doctors and engineers, unlike their situation in Gaza, where they suffer from poverty and unemployment.

Asmahan spends long hours crying alone, especially when she thinks about her father, Mohsen, now deceased. She used to love hearing him sing. He was keen to protect them from harm at all times.

“The thing I hate the most in Gaza is the look of greed on some men’s faces who think I would be easy to have since I am a Dom girl. I also hate when people describe others as Dom people as a way of insulting them. When I am in the street or the grocery store, I hear some parents telling their kids off. They say to them, ‘You Dom boy’ or ‘Why are you acting like Dom people?!’”

The Dom people have become more religious and sometimes shun discussion of the history of their dance and art, perhaps to give the impression that they are like everyone else around them.

In this regard, Dina said, “I always have to prove to my friends, colleagues, taxi drivers and everyone else in society that I am the best, the most generous and the most affable and polite person.”

According to unconfirmed figures and the Dom interviewed, there are about 900 Dom people living in Gaza Strip, and 7,000 in the West Bank and east Jerusalem, most of whom are Sunni Muslims.

Although Zoohoor no longer wears her dancing outfit, she continues to take care of herself. As she ended her interview with Al-Monitor, she related an experience she had recently had. While driving her to her neighborhood, a taxi driver asked her, “How can a woman with your beauty and poise live next to the Dom people?” She hung her head and left.