Who are the Nawari, Gaza's alienated 'Gypsies'?

Palestine's marginalized Nawari community is forced to rely on begging and dancing for income and suffers particular discrimination in highly conservative Gaza, where many look down on Nawaris for their traditions. 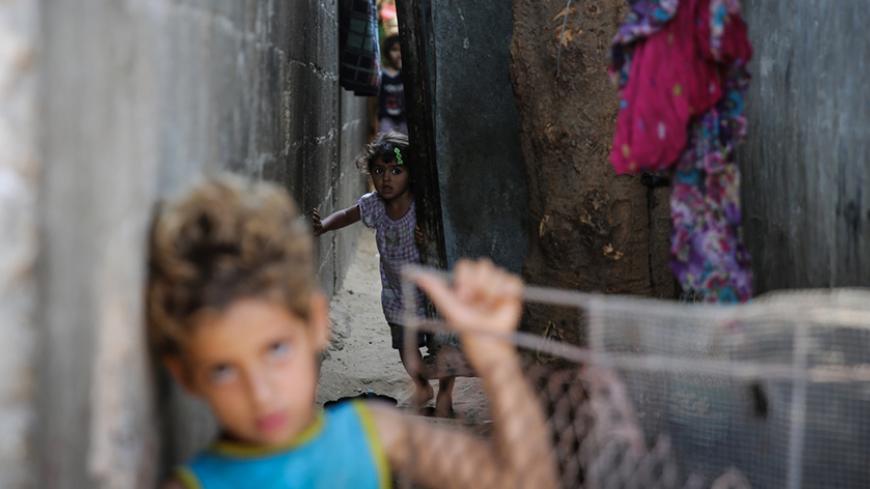 A young girl from the Nawari community peers out from an alleyway, Gaza City, Gaza, Aug. 9, 2016. - Abdel Karim al-Hanna

GAZA CITY, Gaza Strip — In the northern Gaza district of al-Saftawi, the Nawar neighborhood remains socially isolated from its surroundings. Many Gazans discriminate against the Nawari community based on old societal beliefs.

Mussa Natour, a researcher on Palestinian history and member of the Palestinian Curriculum Development Center at the Ministry of Education, stressed to Al-Monitor that there are no Gypsy communities in Palestine at present and that the Roma groups that once spread throughout the Levant area have left Palestine because of the Palestinian-Israeli conflict. He explained that although Gazans consider the Nawaris Gypsies, they are not. They are a separate community. He added, “Nawaris in Palestine are treated the same way as the Roma community is treated in other countries, since the Nawaris’ customs and traditions are similar to those of the Roma community.” These rituals run contrary to the traditions of Gazan society, which has been heavily influenced by Islamic rule, especially after Hamas’ takeover of Gaza in 2007.

Amal Anwar, 70, is one of the oldest women in the Nawar neighborhood. She told Al-Monitor, “Before the Palestinian Nakba, when I was only two years old, we lived in the east of Jabalia. Other Nawaris lived in other Palestinian areas and were fully integrated with Palestinian society, even if we had different roots. But as a result of harassment and oppression that our community faced within society over decades, especially in the 1970s, when our women would dance and sing, Nawaris all moved in the 1980s to a vacant area in al-Saftawi district." The area is now known as the Nawar neighborhood.

Anwar expressed her concerns over the poverty and marginalization her community faces, the lack of access to public services and their status as "Gypsies."

She explained that they are known for dancing and singing in return for money. Anwar did not deny that many Nawari women in the Gaza Strip have indeed worked as dancers, an occupation considered shameful in conservative societies like Gaza's.

“After the events of the first intifada in 1987, Nawari women quit [dancing] as a job. But society in Gaza still remembers them as such and they are still stigmatized as obscene dancers,” she added. “We are not ashamed of being Nawaris. We are committed to the habits and values ​​of Palestinian society, but when people hear our language that they do not understand. They believe we have Indian origins. This misconception has spread.”

There are no official statistics for the Nawari population in the Gaza Strip. Anwar reported that her community counts around 250 people, with 200 of them living in the Nawar neighborhood and 50 in other governorates of the Gaza Strip.

In addition to the Arabic language, Nawaris in Gaza speak Domari, which is unwritten. Nawari children grow up speaking it in their families and wider community. But use of the language is falling, and only the older generation is now truly proficient.

The Nawari community relies on begging as a source of livelihood. Many women beg, and passersby are shocked by their lack of shame.

Ahmed Awni has no problem sending his wife to roam the streets begging for money, provided she wears a veil to cover her features. He told Al-Monitor, "If we had jobs or unemployment benefits from the previous or current Palestinian governments, we would not have accepted begging. But we are deprived of job opportunities because we are a marginalized sector and Palestinian society refuses to see us in public posts.”

Awni noted that his community is also deprived of the financial aid provided by the Palestinian governments and civil organizations, such as the foreign aid provided during the Israeli war on Gaza. Awni said that when he approached a local institution in charge of disbursing financial aid from Qatar to families affected by the war, the institution’s director refused to send anyone to inspect the damage to his home.

Nawaris are prohibited from marrying outside their community for several reasons, including seeking to preserve their lineage. They perceive women as income earners just like men, and they are sent to beg in the streets to provide for the family. Even when inclined, Nawaris find it hard to marry outside their community in light of their social alienation in Gaza.

Ahmed Jlou, 26, was in love with his university classmate, but the girl’s father rejected Jlou’s marriage proposal because he is a Nawari.

He told Al-Monitor, “There are good people and also bad ones in my community. Nawaris of my generation are all educated. We managed to develop good relationships with our neighbors who do not discriminate against us, and some of them I am friends with. Unfortunately, there is a part of Palestinian society that attributes to us issues that I have not experienced in my life.”

Zahia Qara, a psychologist at the Gaza Community Mental Health Program, told Al-Monitor that the way the Nawari community is treated in Gaza owes to the perception that their practices are shameful and sinful. Many Gazans perceive singing and dancing as sinful under their tribal and partisan authority structures, which marginalizes this community because of its origins, she said.

Qara added that Nawari women are forced to beg in the streets because they are marginalized and denied their rights. She noted that the negative image of Nawaris is creating resentment and frustration and causing negative and aggressive behavior. She said, “We fear that continuous injustices will be inflicted on the new Nawari generation, which will produce retaliation.”

Natour stressed to Al-Monitor that historians widely disagree on the pre-Islamic history of the Nawari community in Palestine. Some see this community as part of the Gypsy community, with the same traditions and origins, while others disagree. Based on historical references, he concludes that they are an extension of the historic dispute between Jassas and al-Zir Salem — two clans in medieval Saudi Arabia — that led to a 40-year cycle of vengeance from 494 to 534 CE. He explained that the Nawaris were al-Zir Salem allies and supported him in his war against Jassas. But Jassas ended up ruling the Nejd (today’s Saudi Arabia) and Yemen areas, and the Nawaris were forced to flee toward the Levant, where they took up dancing to earn a living. They started to be viewed with a negative lens hundreds of years ago, according to Natour.