Iraq’s Gypsy communities must lead clandestine lives to avoid persecution by the wider society in Iraq, particularly at the hands of religious extremists and conservatives. 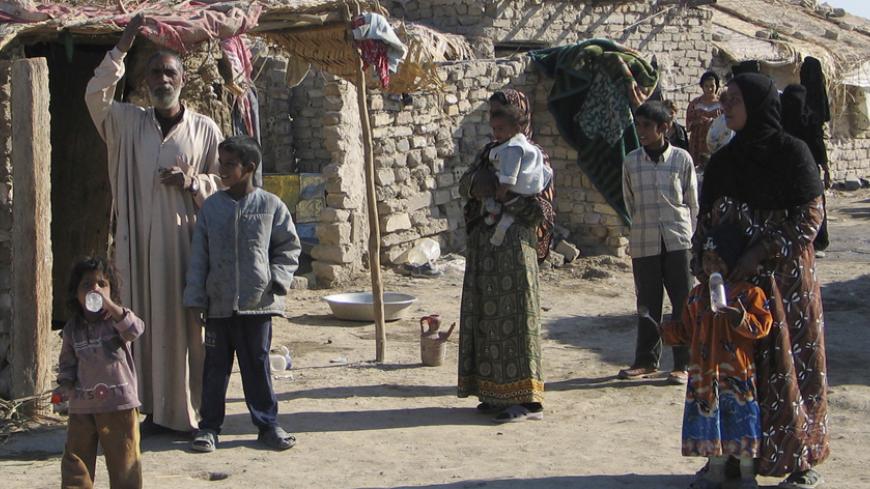 Iraqi Gypsy families gather outside their shack that serves as their home in the southern Iraqi city of Diwaniya, Jan. 4, 2006. - REUTERS/Imad Al-Khozai

The Gypsy village of Fawar is located about 20 kilometers (12 miles) from Diwaniyah. Prior to 2003, Fawar had strong links with its surroundings. However today, visiting this village has become risky because people are suspicious of whoever goes there and visitors are accused of looking for sex and Gypsy dance parties.

The atmosphere surrounding the village has changed since 2003, when Saddam Hussein's regime was overthrown following the US occupation. An air of hostility and conservatism now characterizes and prevails in the village.

In Diwaniyah, which is 193 kilometers (120 miles) south of Baghdad, Al-Monitor met a 47-year-old Gypsy, who refused to give his real name and who referred to himself as Abu Falah. He explained the Gypsies’ situation in the village, saying, “Since 2003, the village hasn’t been as alive as it used to be. Its people have been displaced due to poverty and lack of services. Many are forced to beg or resort to prostitution and throw sex parties, in secret, in light of the social persecution they suffer and since conservatives often shun them because they believe they are immoral.”

Abu Falah added, “Many of the village’s women and men emigrated after 2003 to Syria, Lebanon and Jordan, where they worked at parties and nightclubs. … “There are only around 150 Gypsies in the village today, while before 2003 their number reached 2,000."

Saad al-Lami, a trader who has been visiting the village regularly for the past 20 years to transport goods from Diwaniyah to neighboring villages, told Al-Monitor, “Before 2003, the village was a market for the goods I sell, including food, clothing and beverages. Dozens of Iraqis used to come here to have fun [to listen to Gypsy folk songs and have sex with prostitutes]. However today, it has turned into a poor village whose residents are not able to make a living.”

Sanaa Hamdi, a Gypsy who still lives in the village and works in carpet weaving, told Al-Monitor, “The government has neglected our village. The neighboring villages are not comfortable with our existence because they believe we are immoral people, and outlaws and nonbelievers because we love music and dancing. I traveled with my family in search of work in Baghdad in 2012, but we came back because we could not find a house.”

She added, “Dozens of families have migrated to Jordan and Syria since 2006, some of them sought asylum in a number of European countries. We still communicate with them every now and then, while others went to the big cities and disappeared.”

Abu Issam, a 60-year-old Gypsy, said that the village of Fawar is monitored by security and tribal entities for parties, dancing and music gatherings. “Every now and then men dressed in civilian attire visit us, but we don't know their political affiliations. They warn us about engaging in any forbidden act that does not please God. They don't pay attention to the poverty that we suffer or the lack of services and the diseases that kill our children,” he said.

Interestingly, a report by Iraqi newspaper Al-Mada states that Fawar was only given attention during the local election campaigns, not to improve the services there but rather to win votes.

Journalist Tawfiq al-Tamimi, who writes for Al-Sabah, told Al-Monitor, “The situation of Iraqi Gypsies is at its worst today; they are constantly threatened by conservatives under the pretext of maintaining honor and chastity. Their living conditions are deplorable and they are practically deprived of basic human rights.”

He added, “Because of persecution, Gypsies are forced to lurk among residents and avoid living in distinct and well-known communities, for fear of oppression and aggression by certain groups in society.”

Gypsies are keen on people not knowing their identity for fear of being frowned upon. This has led many to lose their cultural identity gradually due to their attempts to blend in with the population and culture in the new areas in which they reside.

The same point was stressed by sociologist Halim al-Yasiri, who told Al-Monitor, “Gypsies are a social component but have lost all their rights since the founding of the Iraqi state at the beginning of 1920. The community looks at Gypsies with inferiority. In addition, Iraqi conservatives do not want Gypsies to live among them, as they believe that they promote indecency.”

The political and security situation is still volatile in Iraq. The growing influence of the conservative agenda and the religious trend in society will ultimately lead to a decline in the presence and the role of Gypsies in Iraq. Some of them are expected to migrate in the future, while others will continue to sing and work in prostitution and still others might have no choice but to masquerade their identity and integrate in the community.