The wars in Iraq and the policies adopted after 2003 imposed new sectarian borders on the citizens, which are difficult to overcome in times of humanitarian crises. 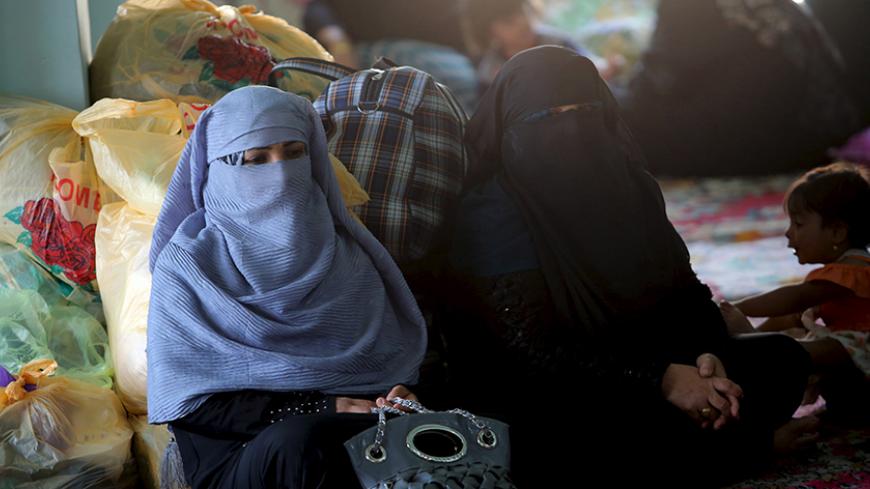 Displaced Sunnis who fled the violence in Anbar province rest at a mosque in Baghdad, April 19, 2015. - REUTERS

Following the battles between the Iraqi army and the Islamic State (IS), thousands of people have left Anbar province, most of them Sunnis. The United Nations announced on April 19 that over 90,000 people fled the province of Anbar in western Iraq and headed toward Baghdad and Shiite-dominated areas in central and southern Iraq.

This large wave of displacement and the humanitarian crisis it resulted in — a lack of accommodation, food and water — has raised the issue of displacement based on sectarian identity. Before this, the migration of citizens had a strict sectarian character; Shiites moved to Shiite areas, Sunnis moved to Sunni areas.

Security procedures at the checkpoints on the entrances to the cities in Iraqi Kurdistan do not allow Arabs to enter Kurdish areas unless they have a “sponsor” who's well known by the local authorities and will act as a guarantor for the displaced.

The migration and displacement in 2004, which took place following clashes between security forces and al-Qaeda in Iraq was characterized by a sectarian aspect. Many Shiites migrated from western and northern Sunni-dominated areas in Iraq, to central and southern areas in Iraq, where Shiites are the majority.

However, the migration of Anbar's residents broke this rule, as it's the first time that a majority of Sunnis are seeking shelter in safer Shiite-dominated areas.

This situation has created great controversy within the communities that have taken in the displaced. Should displaced Sunnis be allowed into the Shiite regions since Iraq is their home, and thus everyone’s home, or should they be rejected for fear of terrorist infiltration? Security concerns are of great importance; the city of Diwaniyah, for instance, rejected refugees on April 21.

Political scientist Ahmed Abyad attributed the refusal to allow displaced Sunnis into Shiite cities to sectarian reasons in his statement to Sky News Arabia on April 19.

However, writer and political analyst Ali Mared attributed the refusal to allow displaced Sunnis into Baghdad and Shiite areas to the “Sunnis themselves.” He told Al-Monitor that the reason is “the Sunnis’ rebellion and the violence, unrest and instability it generated in Sunni-dominated areas. The early stages of this violence were represented by the organized displacement of Shiites who lived in Sunni-dominated areas that have been completely cleared from a Shiite presence.”

He added, “The paradox today is that the residents of Sunni areas, where violence peaked under IS control, fled to the [Shiite] Popular Mobilization Units and the Shiite cities that provided them with protection and care, despite the scars of the near past."

The head of the Iraqi parliament’s Security and Defense Committee, Hakem al-Zameli, told Al-Sumaria TV on April 21, “Hundreds of Sunni displaced families from Mosul and Tikrit were recruited by IS to penetrate security in Baghdad under the pretext of displacement.”

Journalist-writer Ahmed Jabbar Ghareb said the opposite. In an interview with Al-Monitor, he cleared all those displaced since 2003 from what happened and is still happening. He believes that the people were forced to migrate, and that the forced displacement happening today is caused by the attacks waged by IS on densely populated Sunni cities such as Fallujah, Ramadi and areas west of Baghdad.

"The people of Anbar are forced to flee to Baghdad and Shiite areas that surround their province, as they have no other refuge, especially since other surrounding areas are deserts that are not suitable to live in,” he said.

Social researcher Sabah Kadhim told Al-Monitor: “Domestic migrations have become a common phenomenon in Iraq since the era of Saddam Hussein's regime, which forced Kurds to migrate in the 1970s to Arab areas for the purpose of dissolving their national identity. Saddam’s regime also forced the Shiite residents of the Mesopotamian Marshes in southern Iraq to migrate in the 1980s, under the pretext of not supporting the Shiite opposition at the time. After 2003, the civil war and the armed actions of al-Qaeda, and then IS, forced the Shiite minorities in Sunni areas to move toward Baghdad and central and southern Iraq.”

Since forced displacement has existed for a long time, different views on this phenomenon emerge. Othman Abdul Malik al-Saadi, a doctor who was displaced and moved to Jordan and is the son of well-known Sunni cleric Abdul Malik al-Saadi, attributed the displacement to a conspiracy. He told Al-Monitor over the phone from Amman: “The forced displacement of Sunnis and Shiites is a conspiracy. It had been made easy for young Sunni men to join IS and for young Shiite men to join the Popular Mobilization Units to divide Iraq and to get people to kill each other.”

The forced displacement based on sectarianism is still happening in Iraq, which according to Safaa Abdel Hadi, a journalist with the Iraqi media network Al-Iraqiya, has become complicated. “[Displacement] will not end with a simple political reconciliation. This requires a social reconciliation,” he told Al-Monitor. “This phenomenon should be recognized despite its bitterness. The moderate discourse today is not welcomed by society. Violence, threats and intimidation are dominant in the Iraqis’ discourse.”

Abdel Hadi conceded “sectarian revenge is still present,” giving the example of “the position taken by the local government in Karbala, which has decided to prevent displaced people from entering the province.”

Policies in Iraq after 2003 drew sectarian borders between citizens of the same country, which have become difficult to cross, even in times of humanitarian crises. This is clearly reflected in the crisis of Anbar’s displaced people, where political interests and sectarian positions overruled humanitarian emotions.