Renewed sectarian violence this week is setting back Iraqi efforts toward national reconciliation. 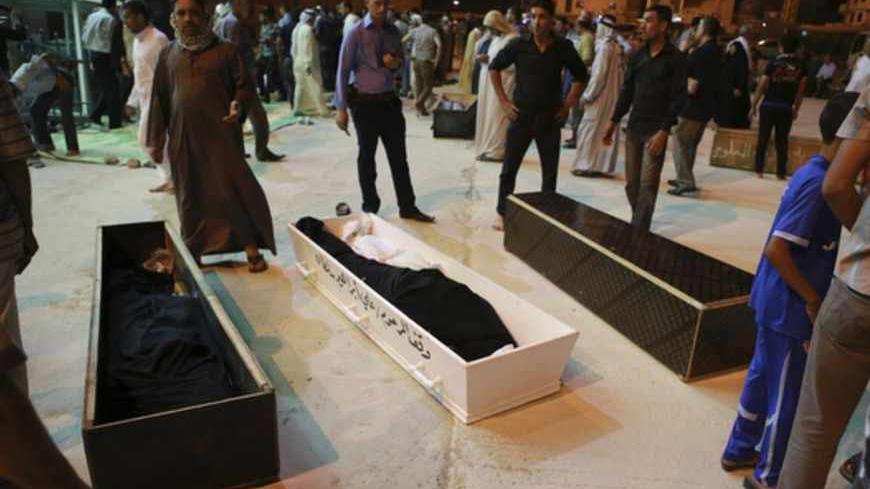 Mourners stand beside coffins of four members of a family killed in Basra bomb attacks, during a funeral in Najaf, around 160 km (99 miles) south of Baghdad, May 20, 2013. - REUTERS/Ahmad Mousa
Ali Abel Sadah
May 21, 2013

The truce between the Shiite-led Iraqi government and its Sunni opposition was broken after a wave of violent attacks in Iraq stepped up the political tension to unprecedented levels, especially when Abdul Malak al-Saadi, a prominent Sunni cleric, accused Prime Minister Nouri al-Maliki of blocking the dialogue initiative.

The bombs that went off in Sunni and Shiite areas last week resulted in more than 450 dead and wounded.

On May 17, similar explosions rocked Sunni-dominated al-Ghazaliya, al-Amiriyah and Al-Madin in addition to Baquba, northeast of Baghdad, and Fallujah to the west.

To Iraqis, this string of violence called to mind the widespread fighting of 2006 and 2007.

These attacks occurred amid a harrowing political crisis as the initiative launched by Saadi to solve the conflict between the government and the Sunni protesters has not yielded any positive results. The Iraqi Shiite Waqf, the governmental body supervising Shiite religious sites, refused the proposal of hosting the negotiations on the premises of al-Askari Mosque — one of the holiest sites in Shiite Islam — in the Sunni-dominated city of Samarra, under the pretext that holy sites are meant for worship and not politics.

Deputy Head of the Shiite Waqf Sheikh Sami al-Massoudi said during a press conference attended by Al-Monitor, “There are places other than al-Askari mosque in Ramadi and Baghdad to hold meetings in.”

It is worth noting that Imam Ali al-Hadi and his son Hassan al-Askari are two holy figures in Shiism, both descendants of the Prophet Muhammad. Their shrines in Samarra were hit by a suicide bomb in 2006, stoking the flames of civil war between Shiites and Sunnis in Iraq.

Yet, the bombings have prompted Saadi to allude to giving up on the dialogue and truce efforts. He shocked the Iraqi public when he recently accused the Iraqi government of aborting the initiative and fanning the crisis.

In a statement published on his official website, Saadi said that he was noticing “negative reactions to the initiative and [attempts] to impede it, starting with rejecting al-Askari mosque in Samarra as a location to hold the dialogue ending with the [bombings] that took place today. This is a sign that the government does not want peace, dialogue, granting rights or coexistence.”

Before Saadi alluded to his withdrawal, protesters in Fallujah, the biggest city in Anbar, held a press conference to announce that “they will boycott Saadi’s initiative.”

Al-Monitor was able to secure an electronic copy of the media statement in which Mohamad al-Bajari, media spokesperson for the Fallujah protest square, said, “Following the heinous acts the militias are performing before the eyes of the government and with its support, the Fallujah protesters are giving up on the negotiations that were suggested by Saadi and will stick to peaceful protests as a means to acquire rights.”

Al-Monitor spoke with sources in Fallujah and was informed that tensions are escalating and Sunni mosque preachers are discussing the idea of announcing jihad against the Maliki-led government.

Clearly, the news coming from Anbar hints that the situation is slipping toward the worst. Yasser Anbari, a writer and journalist, said, “The situation is not reassuring; the current government is not proving convincing to the residents of the province. Everyone is ready to pull the trigger, yet no one is talking about the reasons behind the crisis, the analyses or the solutions. A significant number of people are saying that arms are the only solution. Wise people either do not exist are afraid, or do not mind what is happening.”

Indeed, on May 18, unprecedented clashes between the Iraqi army and insurgents in northern Ramadi took place.

An informed military source told Al-Monitor, “Fierce clashes between insurgents and local police are happening on Settin Street and Hamira Street and in the neighborhood of Dobbat in northern Ramadi.”

As the bad news spreads across the country, Speaker of Parliament Osama al-Nujaifi is trying to address the security situation during an emergency session on May 21. Nujaifi, during a press conference attended by Al-Monitor, called on Saadoun al-Dulaimi, the pro-Maliki Sunni minister of defense, and military and security officials to join the meeting to discuss the “repercussions of the dangerous situation.”

Such a meeting is unlikely to happen. The history of the parliament is rife with disagreements and conflicts of political interests between the ruling parties, which hinders the parliament from monitoring the performance of security agencies.