Residents and political representatives in the predominantly Sunni city of Samarra take issue with what they see as increased Shiite influence in the city. 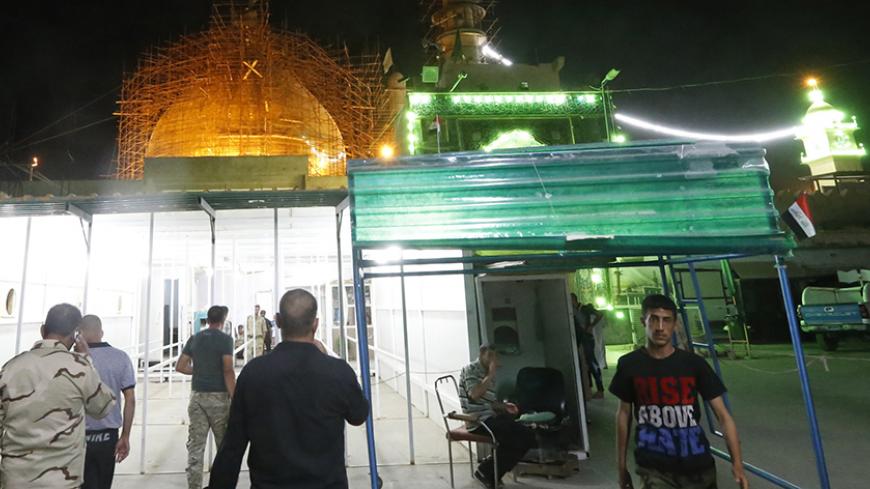 BAGHDAD — Some residents of the primarily Sunni city of Samarra have long felt anxious about a perceived rise in the number of Shiites there. These feelings were amplified recently when throngs of Shiite visitors crowded the streets to commemorate the martyrdom of the 10th imam, Ali al-Hadi (829-868).

Sami-al-Masoudi, a Popular Mobilization Units (PMU) leader, said April 2 that more than 1.5 million people came to Samarra during the observance. The strong Shiite presence during the occasion revived Sunni fears of Shiite dominance.

Some Sunnis even allege that the Shiite Endowment, which manages Shiite religious landmarks, has confiscated properties of the Sunni Endowment. An official of the latter told Arab media outlets April 6, “There have been attempts to falsify property documents of mosques in Baghdad, Diyala and Samarra, in the real estate registration departments, and transfer their ownership to the Shiite endowment in the absence of their rightful owners.”

There has been a demographic change in the predominantly Sunni city, which is also home to the shrine of the 11th Shiite imam, Hasan al-Askari, and the cellar where Imam al-Mahdi, known as the hidden imam, is said to have disappeared.

“The demographic changes … are visible in some areas of Salahuddin [province], where people have not been allowed to return home after the expulsion of the Islamic State (IS). This is also happening in the predominantly Sunni city of Samarra, where coordinated Shiite resettlement operations are ongoing,” Noura al-Bajari, a Sunni member of parliament, told Al-Monitor. "Some Shiite parties are paying considerable amounts to the Sunni owners of real estate and lands to abandon their properties for Shiites to take over them completely. This resulted in higher numbers of Shiite residents in the city."

She also noted, “The armed Shiite factions [of the PMU], raising Shiite slogans and pictures of Shiite religious authorities and leaders, justify their presence in the city [by saying they need] to protect religious sites from IS and other extremist groups."

Al-Monitor toured the city, and indeed found that Shiite symbols and slogans are visible around every corner, along with photos and portraits of Shiite leaders, banned parties and armed factions.

However, Razzaq al-Haidari, a member of the Foreign Relations Committee who represents the Badr Shiite bloc, challenged Bajari’s view. “The presence of the PMU in Samarra is necessary to prevent IS from returning to the city and to protect its residents against terrorism," he told Al-Monitor. “The number of assassination operations and bombings has significantly declined due to the PMU protection in the city. They are protecting both Sunnis and Shiites alike. Many Samarra residents are calling upon the PMU to remain there to protect them against the terrorist groups that have killed many" of the residents.

Haidari also defended the Samarra operations command, which said Jan. 27 it was considering setting up a concrete wall around Samarra to “provide security for the people of the city and to reduce the tight security procedures inside it.” The same day, the Samarra tribal council rejected that idea, saying it would serve as “a partition of the city causing further sectarianism inside it.”

Shiite cleric Amran Abdul Hussein, who visits Samarra periodically to perform religious rituals there, told Al-Monitor, “Samarra is a city for all Iraqis, and every citizen has the right to live there. It is not a city confined to Sunnis only. The Shiite presence in the city today is just and fair, as hundreds of Shiites were displaced from Samarra" when Saddam Hussein was president.

Haidar Kazim, a Shiite resident of Baghdad, told Al-Monitor, “I visit the Shiite shrines in Samarra every year, which contributes to the city’s prosperity, boosts tourism and helps create more jobs. The people of Samarra are the first to benefit from the Shiite interest in the city.”

Sheikh Salah Taha, an imam at one of the city’s major mosques, said in October that Shiite militias had already taken over Samarra and displaced its Sunni residents. "Ever since, the city has become divided in two parts: the suburb where the displaced Sunnis are living, and a part inside the city controlled by a mixture of Shiite militias.”

Khaled Jassam, a Sunni and secretary of the Salahuddin Council, begged to differ. He told Al-Monitor about “hyperbolic reports and events in relation to the displacement and the Shiite-Sunni conflict in the city.”

He said, “There have been some violations. Government committees were set up to deal with them, and the issues were solved in no time. There is no such thing as demographic change in Samarra." Jassam said houses near the Shiite religious shrines were bought for protective purposes.

Ammar Hikmat Elbaldawi, deputy governor of Salahuddin province, told Al-Monitor, “There is no attempt to change the demographic component. People in Samarra do not object to Shiites visiting religious shrines. However, some politicians are trying to stir up sectarian issues to increase their chances in the upcoming elections.”

“Shiites come for short religious visits to Samarra, in addition to the temporary presence of the PMU alongside the army and the federal police. There are no [Shiites] who are coming to permanently live in the city,” he said.

Elbaldawi also said there are no plans to build a wall around the city.

Samarra has always been a mixed city, but the people have managed to live in harmony in the past. Sunnis used to manage and look after the Shiite shrines of the city. However, the 2006 bombing of the tombs of the 10th and 11th imams by Sunni Islamist al-Qaeda militants ignited sectarian strife and even a civil war of sorts between the residents, who are seeking today to regain trust in each other.