Is Samarra the key to reducing sectarian tension in Iraq?

The Sunni-majority city of Samarra has always been a scene of sectarian tension, as the situation has recently escalated with accusations that Shiites are seeking to change the city’s demography. 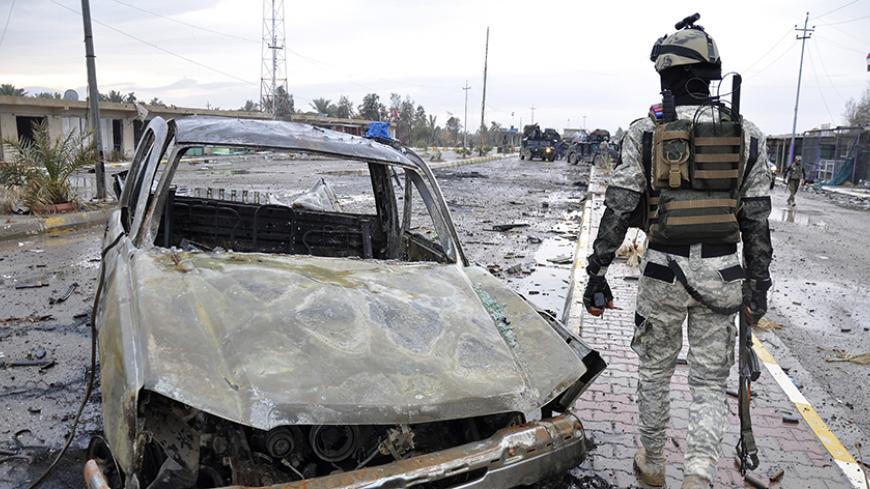 A member of the Iraqi security forces walks past a destroyed vehicle belonging to Islamic State militants during an intensive security deployment on the outskirts of Samarra, Dec. 14, 2014. - REUTERS

The Sunni-Shiite sectarian tensions in the city of Samarra are back on the front burner. Sunni politicians, clerics and a number of individuals have been hurling accusations on social media sites and in various newspapers at some government officials, accusing them of attempting to turn Sunni cities — which are home to the shrine of the 11th and 12th Imams in Twelver Shiite Islam — into Shiite towns.

The Samarra district is located to the east of the Tigris River, in Salahuddin governorate, 160 kilometers (99 miles) northwest of the capital, Baghdad. The city is of great historical value, as it was the capital of the Abbasid Caliphate during the 19th century. It is famous for the Great Mosque of Samarra and its minaret, the Malwiya Tower. Moreover, the Sunni-majority city is home to the shrine of Imams Ali al-Haid and Hasan al-Askari, who are the 11th and 12th Imams of Twelver Shiite Islam.

The shrine was bombed by al-Qaeda during an incident in 2006, which led to the outbreak of sectarian violence across the country.

Sunnis continue to object to this law today, and it is among their most pressing and notable demands.

Tension in the city escalated in 2010, when the Shiite Endowment started buying lands surrounding the shrine. This issue preoccupied the Iraqi public for two years until the Iraqi judiciary ordered it to stop land acquisition in 2012.

In a phone interview with Al-Monitor, engineer Muhannad al-Badri, the editor-in-chief of the local Salam newspaper, confirmed that landowners started to sell their lands given the tempting offer they were receiving — $2,000 per square meter (11 square feet).

Some of the city residents said that the land acquisitions were sometimes made under duress. Therefore, Sunni clerics issued a fatwa prohibiting the sale of the land surrounding the shrine of the two Imams. In this context, Sheikh Abdul Malak al-Saadi issued a fatwa that was published on his website, prohibiting the sale of the lands surrounding the shrine, except to residents of Samarra.

The Sunnis who objected to this law claim that the land acquisition aims at turning the city into a holy Shiite town, as is the case in Najaf and Karbala.

For its part, the Shiite Endowment rejected such accusations. In a January 2013 press statement, the endowment said that the purchase of land is a legal process and that land procurement has never been carried out under duress, adding that this process aims at expansion and development.

In another statement quoted by the official Iraqi Media Network on Aug. 22, 2012, the head of the Shiite Endowment, Saleh al-Haidari, declared that the endowment is ready to return the purchased lands, provided that the sellers will return the amounts they had received in exchange. However, things are more complicated than this, as the issues regarding land acquisition have been referred to the competent courts.

The sectarian controversy over Samarra has returned to the forefront, following demands on the part of certain Shiite and Sunni parties to turn the city into an independent governorate, with the support of some Iraqi members of parliament. Suhad al-Obeidi, for instance, revealed that she filed a demand to parliament in March 2014 to turn Samarra into an independent governorate.

The issue is a hot topic in newspapers and on social networking sites, and the city’s residents who objected to this project said that this is another attempt to turn Samarra into a holy Shiite province.

Badri said that in general the residents of Samarra are not against the project to turn their city into a governorate, but they fear that this would change its sectarian structure.

There have been some incidents in the past few months that contributed to fueling the sectarian discussion in the media. In late October 2014, the people of Samarra woke up to the sight of black flags on the Malwiya Tower. This was part of a Shiite ritual to commemorate the death of Hussein Ibn Ali, the third Imam, which caused a stir among the residents of Samarra and Tikrit, some of whom described the incident as a provocation to turn the city into a Shiite town.

Badri told Al-Monitor that his newspaper conducted an investigation of the issue, but he refrained from publishing it, fearing that it could exacerbate the sectarian tension. He said that the study included statements by local officials, who confirmed that there is a plan to change the demography of the city and create a Shiite majority.

What made matters worse was the arrival of millions of Shiite visitors to the city in December to commemorate the death of Imam Hasan al-Askari; according to the Shiite Endowment the event was attended by 3 million pilgrims.

Badri said that the large number of international Shiite visitors has been of great concern to the people of Samarra, who are once again having doubts about the future of their city.