Could Samarra become a city of Sunni-Shiite cooperation?

The city of Samarra, which holds many Islamic historical sites, has the potential to become a place for cooperation between Sunnis and Shiites, although both exchange accusations of destroying the city. 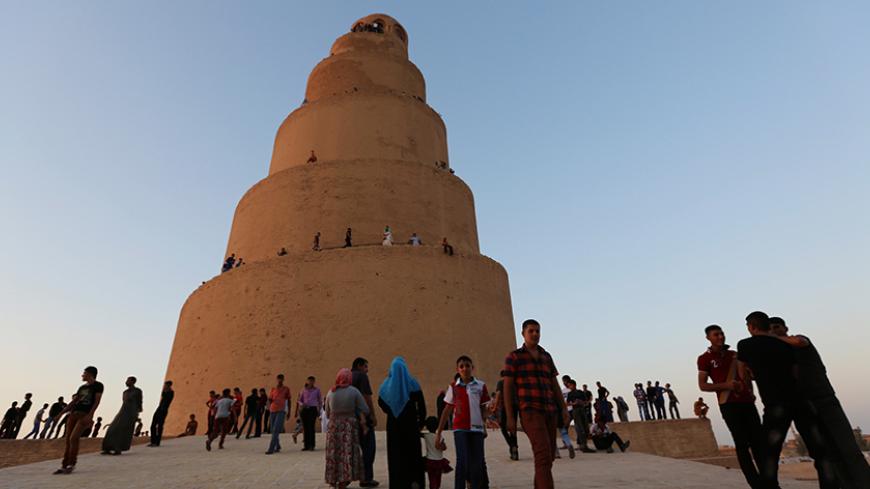 SAMARRA, Iraq — Driving from Baghdad to Samarra in Salahuddin province, 60 kilometers (37 miles) north of Baghdad, has been safer since the Iraqi forces managed on Nov. 25, 2014, to secure the road that links the two cities. Islamic State (IS) militants had controlled the road since June 11, 2014, when they took control of a number of regions in Salahuddin, most notably the city of Tikrit, the center of the province.

Al-Monitor visited Samarra and its famous 171-foot-tall Malwiya Minaret. The Great Mosque of Samarra and its spiral tower that is set on a square base were built in 852.

When approaching the Malwiya Minaret, significant changes to the surrounding area were noted by Al-Monitor's correspondent, who had also visited the site in 1979. Intensified security measures and military fortifications are now seen on site. Ali Hassan, a fighter with the Popular Mobilization Units, told Al-Monitor, “Members of the Popular Mobilization Units protect the site from a possible attack by IS.”

Hassan accompanied Al-Monitor up the spiral staircase of the minaret. Signs of neglect were obvious and no guide was present at the site. In fact, anyone can climb unsupervised to the top of the minaret.

While climbing the tower, we witnessed the crumbling of the structure due to erosion and saw the effects of salt deposits in some places in the base of the tower and its walls. A different type of stone seen in parts of the spiral minaret indicates that some type of restoration has taken place in more recent times. Civil rights activist Nazir al-Asadi, who is interested in archaeology, told Al-Monitor that these restoration efforts “undermine the minaret’s historical value.”

Asadi said that the restoration works had damaged the spiral minaret, which is now threatened to be removed from the UNESCO World Heritage list. In 2007, UNESCO named Samarra, the capital of the Abbasid Caliphate in the ninth century, one of its World Heritage Sites.

Numerous archaeological sites in Iraq have been affected by the volatile security situation since the fall of Saddam Hussein's regime, such as in the historic cities of Babil and Ur, which the US Army turned into military bases in 2003.

On top of the Malwiya Minaret, green Shiite banners can be seen, which has angered many Sunnis — who represent the majority of Samarra’s population — as they consider this to be an attempt by Shiite political and religious forces to impose their influence in the region.

The damage caused to the historic landmark in Samarra as a result of tampering and neglect urged historian Fadel al-Samarrai to issue a media statement on May 27 in which he warned that the “minaret may be subject to abuse caused by security operations.”

For his part, journalist Walid al-Tai told Al-Monitor, “The city of Samarra — inhabited by Shiites and Sunnis alike — and the minaret do not belong to Sunnis alone, but to Shiites as well. It is a historical Islamic symbol even if it was built by the Abbasid Caliph al-Mutawakkil, who took power in 846 and killed thousands of Shiite Muslims.”

Tai said, “Samarra is home to the Askari Shrine that holds the mausoleum of Shiite Imams Ali al-Hadi and Hasan al-Askari. It also holds the cellar where Muhammad al-Mahdi [the hidden imam], who was born in 869, went into occultation — to this day Shiites are still awaiting his reappearance.”

The damage to the minaret is extensive, but it cannot be determined whether this solely resulted from the US and Iraqi military presence, since there is a long history of archaeological neglect and lack of restoration efforts in Iraq.

Writer and journalist Ahmed Jbar Gharb told Al-Monitor that the Malwiya Minaret should be placed under UNESCO’s supervision in order to protect the historical monument from sectarianism and religious fanaticism.

Shiite cleric Ali Abdul-Hussein and Sunni cleric Mohammed al-Samarrai, whom Al-Monitor met at the Askari Shrine, agreed on the need for unity and cooperation against the threat of sectarian division between the Sunni and Shiite citizens of Samarra.

Alaa Zain al-Absi, an official in the Sunni Endowment of Samarra, said in a press statement March 10 that the Popular Mobilization Units and the Shiite-controlled government agencies are seeking to change the identity of the Sunni city by purchasing real estate properties from the Sunnis in the city center adjacent to the Shiite shrines.

Sunni authorities such as the Association of Muslim Scholars accused Sunnis of attacking Shiite pilgrims heading to the city with explosions and car bombs. On Dec. 29, 2014, 17 people were killed in a suicide attack targeting Shiite pilgrims on their way to Samarra; the attack was perpetrated by IS fighters.

In 2006, members of al-Qaeda bombed the Askari Shrine, which is one of the most important religious sites for Shiites in Iraq and around the world.

Samarra provides many options for Sunni and Shiite cooperation. The city houses numerous historical monuments that are important to both Shiites and Sunnis, as well as the most important Shiite religious centers. This makes the city a religious and tourism destination and a successful money-generating project that could assist in reducing unemployment, restoring archaeological monuments and keeping up archaeological exploration activities.