Will Great Mosque of Samarra and its minaret survive?

The 1,200-year-old minaret of the Great Mosque in Samarra is in dire need of restoration, which the Iraqi authorities and UNESCO have started working on. 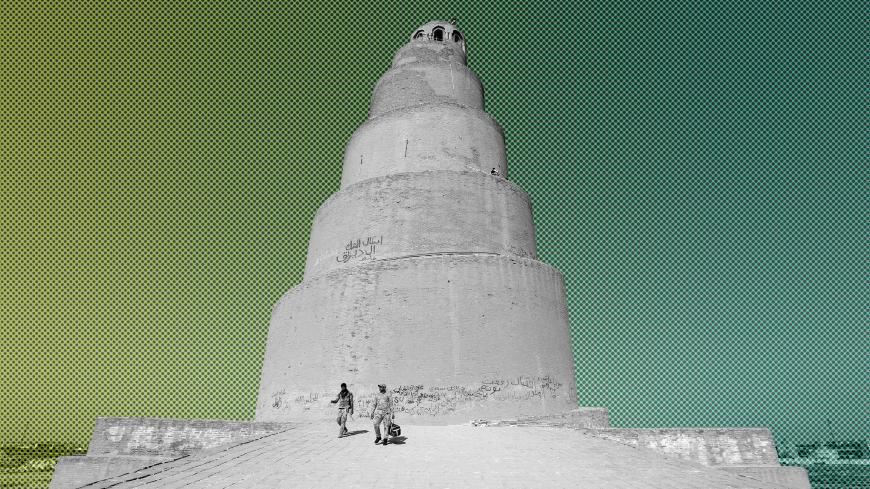 SAMARRA, Iraq — The Malwiya Minaret, an impressive tower at a height of 52 meters (171 feet) with a spiral ramp, still recalls the past glory of the Great Mosque of Samarra, which had been the largest mosque in the world during the Abbasid Caliphate.

However, the spiraling structure of more than a thousand years now runs the risk of crumbling because of the many attacks it has suffered, according to Iraqi media reports.

Its external stairway is unstable, with some stones missing, and the minaret has shaky walls that have the names of visitors carved into them. There is no security at the site, and a young man fell from the minaret and died on March 29, 2017, after having attempted to climb it.

Malwiya is known for its spiraling structure; it does not look like any other minaret in the world. It is one of the many historical landmarks of Samarra, which was put on UNESCO's World Heritage List in 2007. Located on both sides of the Tigris River, 130 kilometers (81 miles) north of Baghdad, the ancient capital of Samarra shows the reach of the Abbasid Caliphate, which was the major Islamic empire of the 8th century; it extended from Tunisia to Central Asia. Today, Samarra is the only surviving Islamic capital that retains its original plan, architecture and arts such as mosaics and carvings.

The Al Ahram Gate website reported that a study ("Suggested techniques to preserve Samarra Mosque with its Malwiya Minaret") conducted last year by Issam Hishmat of South Valley University in Egypt said the mosque has suffered damage of various sorts over the years. In 2003, during the American invasion of Iraq, the mosque served as a military base, and in 2005, the minaret was damaged during a terrorist attack, destroying many of the architectural elements of the 1,200-year-old monument.

Mahmoud Khalaf, the mayor of the Samarra district, said some of the damage to the mosque is caused by weather conditions and humidity. Khalaf told Al-Monitor that maintenance work on the site of the mosque is well underway. In 2017, UNESCO and the Iraqi authorities signed an agreement for the conservation and management of the archaeological city of Samarra, starting with the restoration of the Great Mosque and the Malwiya Minaret.

“I have tried to communicate with officials from both the local and federal governments to obtain more funds for the rehabilitation of this old monument, but we get the same answer every time: 'The top priority is the war against the Islamic State, the country’s security and stability,'” Khalaf said, explaining that a UNESCO delegation has been studying the site to find a solution to the damage caused by humidity and the deterioration of the bricks.

Khalaf has been in touch with engineer and archaeologist Giovanni Fontana Antonelli, a member of the UNESCO delegation who works on the restoration of the site. “We are trying to assess the condition of the mosque in a bid to find appropriate solutions to stop environmental and human risks, as well as to [correct the damage caused by] previous unfit maintenance work [during the Baath regime in the 1990s],” Antonelli told Al-Monitor.

“We will be conducting field visits and meetings with local authorities and concerned parties to achieve our objectives,” he said.

Antonelli added, “We are also looking at assessing the impact of the construction of a nearby museum." UNESCO has concerns about the visual impact on the minaret of the museum, which is planned by local authorities.

Antonelli said "a joint technical committee monitors the quality of the works that are to be implemented and the establishment of a joint project between Iraqi and international experts to formulate a comprehensive plan for rehabilitation.”

Al-Monitor met with Algerian archaeologist Mahmoud Bandakir, who is also a member of the UNESCO delegation. “The historical city of Samarra was included on the list of endangered world heritage in 2007. Therefore, several corrective measures must be implemented at the site, which is the government’s responsibility.”

He said, “There has been a delay in the implementation of the maintenance works due to the security situation and the lack of financial allocations, which means that Iraq has violated the decision of the World Heritage Committee issued in 2013" whereby governments are tasked with carrying out suitable maintenance work.

Bandakir said, “After consultations with the local government of Salahuddin province, it has been decided to start work on the Great Mosque as it is the most damaged — not to mention the previous inappropriate maintenance and rehabilitation work. This is in addition to the bombing of the mosque during the US invasion in 2003.” He said the maintenance work should be carried out according to international standards as called for under the Venice Charter of 1964.

The head of the parliamentary Media and Culture Committee, Maysoon al-Damluji, told Al-Monitor, “The coming period will witness a facelift for the archaeological sites and monuments and the establishment of investment projects. The Iraqi Antiquities Authority said the maintenance and restoration works at the mosque will be financed by the Iraqi Sunni Endowment using proceeds" collected from mosque tourists during Saddam Hussein’s regime.

Khalaf said the restoration plan will include “the construction of infrastructure under the requirements of the World Heritage List, which will include a building for the mosque’s administration, visitor guidance center and the development of squares. The project documents were transferred to the World Heritage Center and then sent to the International Council on Monuments and Sites for evaluation.”

He concluded, “We are ready to discuss with them the tourism and cultural investment projects of the mosque in addition to other monuments in the city."