Sunnis in the city of Mosul are disappointed about the growing Shiite influence in the city following the liberation from the Islamic State. 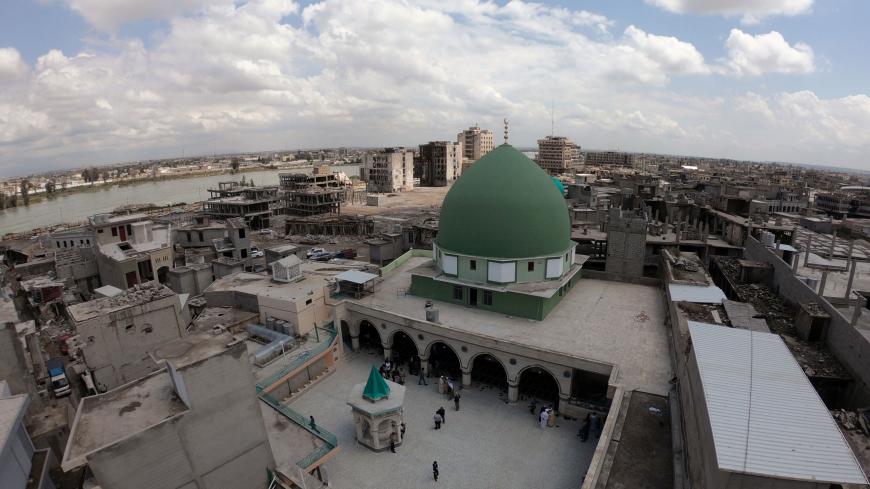 A general view of al-Basha Mosque, renovated and reopened after being destroyed during the war in Mosul, ahead of the holy month of Ramadan in the old city of Mosul, Iraq, May 4, 2019. - REUTERS/Abdullah Rashid

Abu Bakr Kanaan, director of the Sunni endowment in the Ninevah governorate, said in a statement June 29 there has been “a demographic change, and residents were forced out of the old neighborhoods in return for huge sums.”

Kanaan was referring to the Sunni-Shiite sectarian conflict in the governorate that was liberated from the Islamic State (IS) in 2017. Controlling the religious sites in Ninevah is of top priority for the for the warring forces. This is not to mention that there are documents revealing attempts on the part of the Shiite endowment authority to seize control of several religious sites, including 17 locations in the old area, which prompted the governorate’s MPs to hold a meeting June 23, gathering the directors of both the Shiite and Sunni endowment authorities to discuss this conflict.

In a serious expression of their fears of Shiite control over Sunni mosques, the people of Mosul sent a letter June 25 to the highest religious authority in the country, Ali al-Sistani, calling for setting limits to the Shiite endowment office controlling Sunni property, including mosques.

MP for Ninevah Governorate Sherwan Dobardani told Al-Monitor that “armed militias” are “illegally” taking control of the Sunni endowment properties, stressing that “the people of Mosul are angry at the Shiite control of Sunni property.”

Ninevah Governor and former leader of the Iraqi Decision Coalition Atheel al-Nujaifi went as far as stating June 24 that “there religious parties and forces that believe it is necessary to turn Mosul into a Shiite city.” He added that these forces are trying to control mosques and shrines where Sunnis have been praying for hundreds of years.

Documents released by the Sunni Endowment Management and Investment Authority in Ninevah May 26 revealed that shops in the Bab al-Sarai district in central Mosul, affiliated with a Sunni mosque, had become the property of the endowment.

Fakr al-Din al-Jubouri, a resident of Mosul, told Al-Monitor that “some places and markets now bear the names of Shiite religious symbols.”

“Popular Mobilization Units (PMU) men that took part in the liberation of Mosul from IS tell people they were the ones who drove the terrorist group out of the city and they have to stay in it to ensure that terrorism does not return,” Jubouri said.

The closed area of Mosul is home to ministers and PMU leaders. The dispute between Shiites and Sunnis over religious sites is not only limited to Mosul. In Samarra, Sunnis accuse the Shiite endowment of taking over the Holy Shrine of Askarian Imams as well as its annexed properties and lands.

Since 2004, shortly after the US invasion of Iraq, as a result of the sectarian conflict, two different endowment authorities were established — both affiliated with the Ministry of Endowments. Following IS's occupation of Mosul in 2014, the Shiite endowment authority stopped operating in the governorate until the liberation of the city and opened its first headquarters east of Mosul on Dec. 19, 2017.

Kanaan told Al-Monitor, “The Shiite endowment has been transferring the ownership of Sunni mosques and religious sites to its name, such as the mosques of the daughters of Imam Hassan, the second Shiite imam in the old city of Mosul.”

Meanwhile, Bassem al-Bayati, director of the Shiite endowment, told Al-Monitor, “These Sunni claims are baseless and aimed at stirring sectarian sedition. Any change in the ownership or rent of properties is done as per the law.” Bayati accused the Sunni endowment of “controlling the Shiite Endowment under Saddam [Hussein]” — in reference to Sunni dominance back then.

Farqad al-Saadi, director of relations of the Shiite endowment, told Al-Monitor, “The ownership of some of the real estate in the city has not been settled since the Ministry of Endowment and Religious Affairs had been dissolved under Saddam. Today, the Shiite endowment has only rented the properties according to the laws and regulations.”

A former member of parliament for Ninevah, Mohammed Abed Rabbo, told Al-Monitor that “seizing control of mosques means taking the conflict to a who new level. It is an attempt to enshrine the Shiite presence in Sunni areas according to well-thought plans.”

“How could a mosque in a predominantly Sunni area turn into a Shiite property?” Abed Rabbo asked.

Wathiq al-Jabri, adviser for the Iraqi Media Development Center, believes that conflict is economically driven. “The returns on renting out religious properties are very profitable. This is not to mention the political and influential power these religious sites represent,” he told Al-Monitor.

From a legal point of view, former Judge and legal expert Ali al-Tamimi told Al-Monitor, “The law is clear and stipulates that all concerned stakeholders have to refer to the real estate registration services, in accordance with Article 10 of the Real Estate Registration Law. In case of a dispute arising as to the ownership of a property, the state’s Real Estate Department would be the competent authority to settle the settlement, and then the government, which must form inquiry commissions. There is also the court of first instance that is also a legitimate party to settle the differences.”

Mosul, which was destroyed by IS, continues to be the victim of sectarian strife over religious real estate between the Shiite and Sunni endowment authorities. The PMU, which took part in the fighting against IS to liberate the city, have been contributing to the Shiite control of the city’s vital sites, especially the properties that are registered in the name of the Ministry of Endowment under Saddam, which was dissolved after 2003. Back then, Sunnis had the upper hand. Today, Shiites are trying to turn the tables.