Conflict over Shiite and Sunni endowments erupts in Mosul

Sunni Endowments in Mosul complain about Shiite domination over the Sunni religious sites in the city. 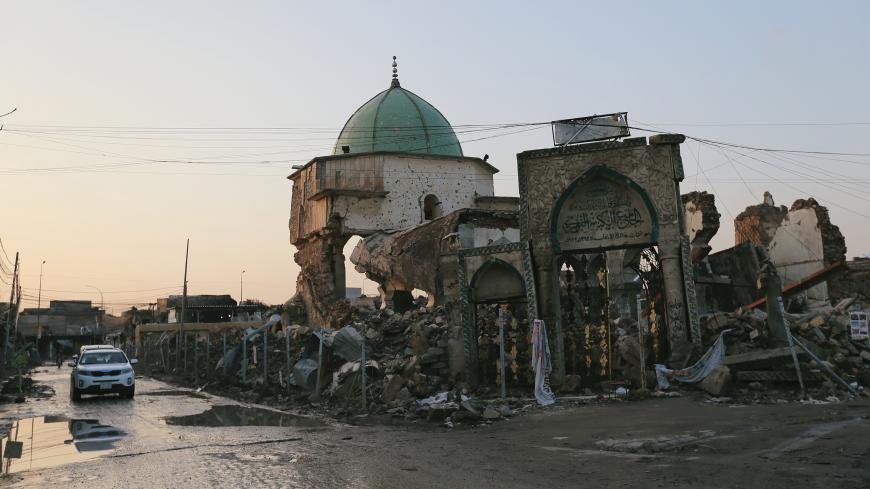 The destroyed Grand Mosque of al-Nuri is seen in the Old City of Mosul, Iraq, Jan. 29, 2019. Islamic State leader Abu Bakr al-Baghdadi proclaimed a "caliphate" in 2014 from the Sunni mosque. - REUTERS/Ari Jalal

The northern Iraqi city of Mosul is on guard about the possibility of an outbreak of sectarian strife between Sunnis and Shiites following allegations that the Shiite Waqf (religious endowment) is seeking to seize Sunni-held land in the area. The head of the Iraqi Al-Qarar Coalition, Osama Najafi, said Jan. 30, “The Shiite endowment in Ninevah [province] is trying to register hundreds of property bonds belonging to the Sunni Waqf in its name, using its influence through official books issued by the General Real Estate Registration Directorate.” Najafi said the Shiite endowment was also “pressuring and threatening staff in the real estate registration office in Mosul.”

The Sunni Waqf has demanded that the federal government “put an end to the attempts by the Shiite Waqf to seize more of its real estate and property,” as seen in a Jan. 26 statement by Shirwan al-Dubardani, a member of the Iraqi parliament from Ninevah. He told Al-Monitor, “Rogue armed groups are trying to seize land in Ninevah in operations outside the law,” adding, “The fact-finding commission will identify the official entities involved.” Dubardani said, “Authorities in Ninevah filed a complaint to Prime Minister Adel Abdul Mahdi, requesting a swift intervention to stop violations against the Sunni Waqf and land belonging to them. Deputies from Ninevah will adopt a unified position in issuing a decision to halt these violations.”

Both the Sunni and Shiite endowments were established in 2003, shortly after the US invasion of Iraq, with the division of the Ministry of Endowments and Religious Affairs into Sunni, Shiite and non-Muslim bodies. Following the Islamic State’s occupation of Mosul in 2014, the Shiite Waqf ceased its functions in the province, returning after the liberation of the city to open its headquarters in eastern Mosul on Dec. 19, 2017.

In reality, the conflict is not a product of today’s events. Former Ninevah Gov. Atheel Nujaifi said in January 2018, “The Shiite Waqf office in 2010 requested the transfer of ownership of 20 historical mosques to its possession, all 20 of which are in the Old City and were destroyed by fighting.”

On Jan. 27, 2018, the director of the Sunni Waqf in Ninevah, Abu Bakr Kanaan, accused the Shiite Waqf of appropriating land even though documents show it is owned by the Sunni Waqf. Kanaan said the Shiite Waqf was trying to take over custodianship of property surrounding the shrines of the Prophet Seth and the Prophet Yunus (Jonah) that is often rented out; the shrines were destroyed by the Islamic State. In September, hundreds of vendors in the area of the Yunus shrine appealed to the local and central governments to intervene to stop the encroachment of investors contracted by the Shiite Waqf.

Farqad al-Saudi, the director of public relations for the Shiite Waqf, told Al-Monitor, “What was published on the website of the Sunni Waqf in Ninevah was lies from the mouth of its director, Abu Bakr Kanaan.” Saudi said, “There is real estate which is unresolved and registered in the name of the dissolved Ministry of Endowments and Religious Affairs. By law, the right of lease-holding lies with the Shiite Waqf in accordance with official protocols.” Saudi said, “Official decisions provide for the possibility of investing in properties until their status is resolved by dissolution committees.”

The director of the Shiite Waqf in Ninevah, Bassem al-Bayati, told Al-Monitor, “The lease of the Prophet Seth site on the right side of Mosul by the Shiite Waqf is a fundamental right and is in accord with the regulations of the dissolved Ministry of Endowments and Religious Affairs.”

Wathiq al-Jabri, an adviser for the Iraqi Media Development Center, told Al Monitor, “I have been continuously following the dispute between the Sunni and Shiite endowments — even before the Islamic State’s invasion of Mosul — in relation to the ownership of mosques and shrines.” He said, “Sources inside the two endowments have confirmed for me that there is an agreement that in the event property lies in a Shiite area, it belongs to the Shiites, and vice versa. So some property has been exchanged.”

Jabri attributed the conflict to “the financial returns on some properties and their associated leases.” He said, “Another reason is the chaos caused by the Islamic State during its occupation of the city when it annexed some Shiite mosques to the Sunni endowment. Following these events, the Popular Mobilization Units went out with the intention of returning the mosques to their original owners. A third cause is parties who are seeking sectarian strife to prevent a Shiite-Sunni convergence in the city, portraying it as an attempt to spread Shiism in the city.”

A deputy from Ninevah province, Haneen al-Qaddo, denied “the existence of Shiite takeover operations on property in the city.” He told Al-Monitor, “This is an issue of regulatory protocols. The Sunni and Shiite endowments must defer to the judiciary, providing evidence and documentation, away from the media.”

Former judge Ali al-Tamimi told Al-Monitor, “Any seizure of property or land by either side reflects a violation of Article 27 of the Constitution and Article 124 of the Iraqi Civil Code, as well as the 2013 Law No. 21, which regulates the sale and circulation of state funds. The court can also nullify this, according to Article 141 of the Civil Code, under the concept of gross injustice, and restore the former circumstances.”

Shiite efforts to acquire Sunni endowments in the city of Samarra and Ninevah are fraught with political and sectarian conflict, particularly due to the mixed nature of these entities. Although both have a Sunni majority, they have dozens of Shiite endowments that pose an ongoing source of fervent conflict — in particular those properties registered in the name of the dissolved ministry. While impartial laws may resolve the disputes between the endowments away from sectarian and political struggles, this remains a difficult matter in the current climate.