Ancient palace emerges from under Mosul shrine destroyed by IS

The Islamic State's destruction of the prophet Yunus' shrine in Mosul has revealed the Assyrian palace long thought to be beneath it. 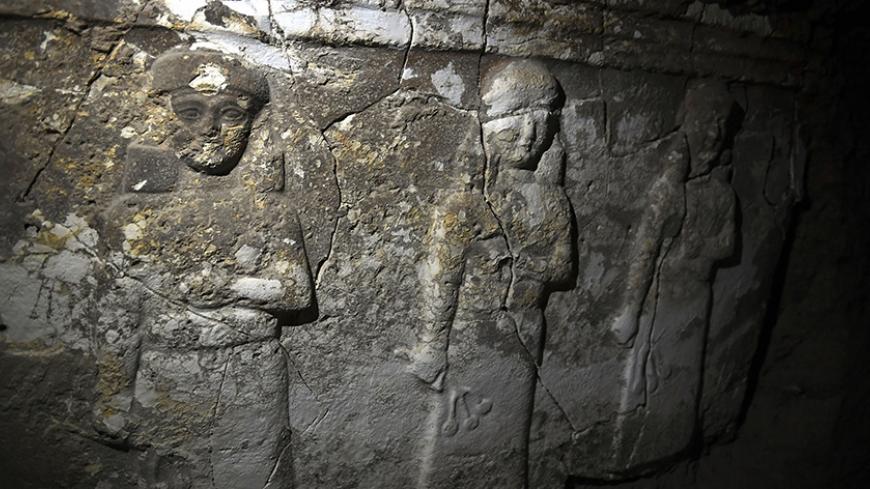 Ancient carvings are pictured in a tunnel underneath the tomb of Jonah (Nabi Yunus) in eastern Mosul, Iraq, March 6, 2017. - ARIS MESSINIS/AFP/Getty Images

BAGHDAD — The capture of the shrine of the prophet Yunus in Mosul on Jan. 19 from the Islamic State (IS), whose fighters rigged the shrine and blew it up July 24, 2014, revealed the extent of the destruction inflicted by the militants, and on Feb. 28 archaeologists uncovered a palace beneath it, intact since 600 B.C. The palace highlights the significant historical value of the site, dating back to the Assyrian Empire, which began emerging hundreds of centuries before the Christian era.

Sheikh Abdullatif Hemayem, head of the Sunni waqf (endowment), visited Mosul March 18 and announced that the waqf is planning to rebuild the shrine's mosque, raising concerns that the newly discovered palace will again disappear, perhaps forever.

Faleh al-Shammari, director of antiquities in Ninevah, told Al-Monitor, “Antiquities authorities had been aware of the palace’s existence under the tomb of Yunus, but [lacking knowledge of the specific location] had never carried out excavations. IS also knew about it, so they dug tunnels into the tomb site … on a large scale, revealing more features and unearthing more artifacts. However, these excavations were neither methodical nor scientific. The sole purpose was to rob and destroy the site.”

Shammari added, “The space surrounding and beneath the shrine offers many historical sites and valuable artifacts.” He added, “Excavation and preservation work will begin once stability is restored, and a budget will be allocated to that end. Competent agencies are currently clearing the rubble.”

Shammari went on to note, “Assyrian inscriptions referring to King Esarhaddon were discovered.” This discovery confirms a theory advanced by the renowned Iraqi archaeologist Benham Abu al-Soof, who argued that the ruins of fortresses belonging to the ancient city of Ninevah as well those of King Esarhaddon’s palace were buried beneath the hill on which the shrine had been built.

With this discovery, the significance of this shrine now exceeds that of only being a destination for adherents of the Abrahamic religions. In Christianity, Yunus is known as Jonah and in Judaism as Yonah. His status as a prophet is recognized in the Quran.

Iraq is, of course, home to many Mesopotamian historical sites. The rise of Islam ushered in a transformation of these sites into Islamic monuments. As a result, the products of many civilizations and religions literally overlap one another. A case in point is the temple of Shamash, a Babylonian temple believed to have been built sometime between 1792 and 1750 B.C. and later transformed into an Islamic monument. Another example is at the site of the ancient city of Borsippa (whose first era is dated 604-562 B.C.), some 15 miles from the ruins of the historic city of Babylon and where a large mosque was later built to commemorate the birthplace of the prophet Abraham.

Despite being sacred, the tomb of the prophet Yunus was not spared destruction by IS, because it was deemed to promote “shirk” (polytheism or idolatry), according to the group’s ideology. This same violation on Islamic teaching on monotheism led IS militants to destroy other centuries-old shrines and ruins. Destroying them is considered obligatory.

IS justified the theft and trafficking of antiquities under the pretext of these items also being considered sacred and worshipped. A number of Iraqi historians and archaeologists said this month that IS had destroyed the majority of ancient artifacts in the Mosul Museum, Iraq’s second largest museum, while plundering other valuables.

Jaafar al-Talaafari, a Ninevah journalist, told Al-Monitor that residents revere Yunus' shrine as more than a religious monument, noting, “In addition to its religious significance, the shrine is a touristic destination located on top of a hill that overlooks the city. Once on top, the visitor can enjoy a view from on high across the Mosul landscape.”

The fierce battle over Mosul between Iraqi security forces and IS militants has been raging since October. Amer Abdul Razzaq, an archaeologist and researcher at Dhi Qar’s Directorate of Antiquities, told Al-Monitor, “Before embarking on any potential excavation activity, monuments destroyed by IS should be rebuilt and preserved.” He added that excavating in Mosul has been sparse since the rule of President Saddam Hussein, as most work has been on hold.