Following a recently released video of Islamic State militants destroying important artifacts at the Ninevah Museum in Mosul, there are fears that the city’s archaeological sites are at risk of destruction. 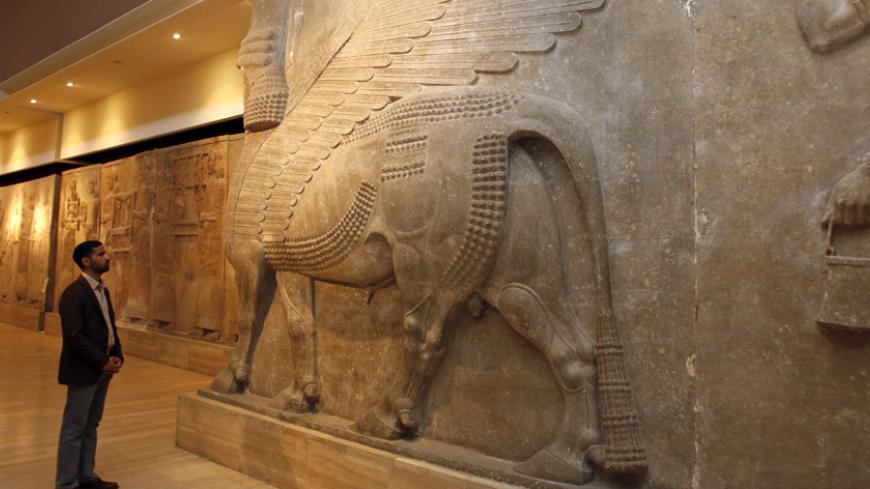 A man looks at ancient Assyrian statues, similar to some of the artifacts destroyed by the Islamic State in Mosul, at the Iraqi National Museum in Baghdad, Feb. 28, 2015. - REUTERS/Khalid al-Mousily

A video posted online Feb. 26 by the Islamic State (IS) shows militants from the group destroying artifacts at Mosul's Ninevah Museum, the second most important museum in Iraq, after the Iraq Museum in Baghdad. According to archaeologists, it is one of the most important museums in the world, housing artifacts from the successive civilizations that inhabited the city over thousands of years. The worst might be yet to come, as IS-occupied Mosul hosts almost 2,000 archaeological sites and buildings, including the Hatra temple complex, which is on UNESCO's list of World Heritage sites.

While some commentators described the museum’s ransacking as a cultural tragedy or disaster, UNESCO Director-General Irina Bokova issued a statement Feb. 26 asserting, “This attack is far more than a cultural tragedy. This is also a security issue as it fuels sectarianism, violent extremism and conflict in Iraq.” She called for “an emergency meeting of the Security Council on the protection of Iraq’s cultural heritage as an integral element for the country’s security.”

The Ninevah Museum, built in 1952, includes artifacts from the Assyrian civilization, which arose in the second millennium B.C. The civilization is renowned for its architectural achievements and statue production, in particular statues of large, winged bulls, as well as its accomplishments in astronomy, mathematics and agricultural sciences. Following the demise of the Assyrian civilization in the first millennium B.C., Mosul experienced the successive rise of a number of civilizations — including the Persians, Romans, Sassanians and Hatrans — until Muslims took the city in 641.

Over the course of thousands of years, these civilizations left behind ruins, antiquities, libraries and buildings exhibiting diverse architectural styles, making the city of Mosul a major cultural destination and one of the most important centers of world heritage. According to a statement issued by the Iraqi Ministry of Tourism and Antiquities in August 2014, Mosul has 1,791 archaeological sites, 250 historic buildings and 20 large libraries containing important Islamic manuscripts.

Mufid al-Jazairi, director of the Iraqi Association for the Support of Culture and former minister of culture, described the IS attack as a “shocking satanic act.” Speaking to Al-Monitor by phone from Baghdad Feb. 27, he expressed his alarm at the repugnance of the antiquities' destruction. Jazairi said that the vast majority of the statues and artifacts that were destroyed were authentic, meaning Iraq will be deprived of them forever.

Iraqis take pride in their country’s cultural heritage, considering an assault on it to be an attack on their cultural identity. An incident such as that perpetrated by IS will have an immense impact on them. The vandalism and theft at the Iraq Museum during the entry of US forces into Baghdad in 2003 remains fresh in Iraqis’ minds. The US military sent tanks to guard the Oil Ministry, but failed to protect the museum. The Americans explained their actions by saying that oil was Iraq’s wealth, so it had to be protected, but Iraqis felt that the museum represented their spiritual wealth and should also have been secured. This incident reverberates to this day, with concerned Iraqi agencies continuing to search for stolen antiquities. The museum, closed since the invasion, celebrated its re-opening Feb. 28.

The ransacking of the Ninevah Museum has not only provoked Iraqis' resentment toward IS, but also intensified it toward the political and military officials who failed to properly defend Mosul, demanding that efforts be expedited to hold them accountable. Iraqis have been expressing such views on social networking sites as well as local and Arab media outlets.

Jazairi agrees with this view, stressing to Al-Monitor that responsibility for this crime does not fall on IS alone, but is borne by all those who contributed to Iraq reaching such a low point that it could no longer defend one of its most important and ancient cities. Jazairi noted that some have asked, “Was the occupation of Mosul inevitable?” To this, he says the answer is no. According to him, all of this could have been avoided had the Iraqi political elite exhibited wisdom and confidence.

It is clear that the Iraqi government, in light of the current circumstances, is unable to defend the nation's cultural heritage in Mosul. Thus, protecting Mosul’s antiquities, as part of world heritage and as demanded by the world community, requires urgent international action. Iraqi archaeologists fear that a much larger disaster than the ransacking of the Ninevah Museum is on the way if nothing is done. All of the archaeological sites in territories controlled by IS are now vulnerable to destruction.

Qais Rashid, president of the General Authority for Iraqi Antiquities and Heritage, told media outlets Feb. 28 that IS has attached explosives to the ancient Ninevah walls in preparation to destroy them. He warned that the organization then plans to obliterate all other sites.