After the defeat of the Islamic State in Mosul, a campaign to reconstruct the ancient city of Nimrud with the cooperation of UNESCO has begun. 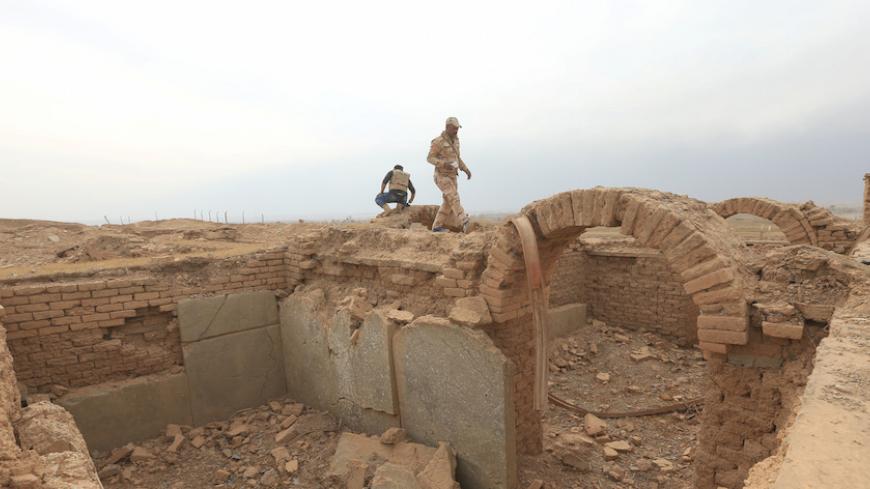 Iraqi authorities announced last month that UNESCO has started the first stage of the restoration of the ancient city of Nimrud, which is located on the banks of the Tigris River, about 20 miles south of Mosul. The city was liberated from the Islamic State (IS) in November 2016 and is the cradle of the Assyrian civilization founded in the 13th century B.C.

In 2015, IS wreaked havoc on archaeological sites in the city, using bulldozers and explosives to destroy monumental landmarks, while filming all these acts of vandalism and destruction. According to a press statement by Qais Rashid, the undersecretary of the Ministry of Culture, Tourism and Antiquities, following Nimrud's liberation, 70% of the city’s antiquities were destroyed. Moreover, Iraqi army Maj. Gen. Diyaa Kazem al-Saidi, who took part in the liberation of the city, said that 200 ancient paintings were stolen from Nimrud.

The relics around Mosul, including the ones in Nimrud, were discovered in 1845 by British archaeologist Henry Layard and Chaldean Mesopotamian archaeologist Hormuzd Rassam, who uncovered significant Assyrian relics in Ninevah. The discovered relics include the statue of the winged bull and the Library of Ashurbanipal.

On March 6, 2016, the Iraqi Ministry of Tourism and Antiquities confirmed that IS had deliberately demolished Nimrud for ideological reasons. This prompted Director-General of UNESCO Irina Bokova to confirm her support for the city on Nov. 25, 2016, the day Nimrud was liberated from the clutches of IS. Bokova stressed that UNESCO must help protect Iraq’s heritage from further looting and destruction, calling for an assessment of the inflicted damage.

The Nimrud reconstruction project coincides with the launch of the Ministry of Planning and Development Corporation's 10-year reconstruction plan of the liberated areas, scheduled to start in early 2018, at an estimated cost of $100 billion.

Earlier this summer, the UNESCO mission visited the archaeological site of Nimrud and conducted preliminary inspections of the site to determine ways to proceed.

Faleh al-Shammari, the head of the Department of Antiquities for Ninevah province, told Al-Monitor, “The committees formed by the Antiquities and Heritage Authority have begun to document the damage caused to the archaeological sites in the liberated areas — namely the city of Nimrud. This is the first step for the UNESCO reconstruction project.”

Shammari said, “In fact, the rehabilitation process has already begun with the construction of a 3-meter-high modern security fence around the city and strengthening the security points around the fence to prevent any breaches by citizens of nearby areas. Operations have been launched to demine the area and remove any booby traps and bombs, to create a more secure environment for the UNESCO project."

He added, “The American Smithsonian Institution has begun to assess the damage caused to the destroyed artifacts and relics so they can be restored in an appropriate manner, starting with the palace of Assyrian King Ashurnasirpal II — whose remains are scattered around it after IS tried to destroy it.”

Shammari noted that broken archaeological artifacts are being transferred to a secure storage area.

The US government announced June 28 that it intends to send a team of experts to Iraq to assess the damage caused to the archaeological city of Nimrud. Mark Taplin, the director of the US Department of State's Bureau of Educational and Cultural Affairs, said, “The bureau granted the Smithsonian Institution $400,000 for the preliminary work [in Iraq].”

Iyad al-Shammari, a member of the parliamentary Committee on Tourism and Antiquities, told Al-Monitor, “Operations have been launched to secure the city, categorize the relics and determine the extent of the damage, and this information will be presented at the donors’ conference scheduled for September in Paris to obtain adequate grants for the restoration of Nimrud, in addition to funds earmarked by UNESCO.”

He added, “Until the necessary funds are approved, the Iraqi teams are collecting the scattered artifacts and sculptures and rehabilitating what was destroyed by IS. As part of the Iraqi plan for the reconstruction of Nimrud, the Iraqi state is keen to approach international bodies that have expressed their willingness to contribute to the reconstruction and rehabilitation of the archaeological sites, including Italy and the United States."

The lawmaker noted, “The plan also includes the training of local cadres on how to deal with the damaged sites and relics, and how to repair and rebuild them properly, without affecting their historical value."

On May 13, Dario Franceschini, the Italian minister of cultural heritage and activities and tourism, handed over to his Iraqi counterpart, Farid Rwandzi, the final report of the aerial survey of the destroyed antiquities in Mosul and other Iraqi areas, which was prepared by a specialized Italian team in coordination with UNESCO.

Head of Babil Antiquities, Hussein Falih, told Al-Monitor, “The Babil antiquities department is ready to provide expertise and cadres to contribute to the reconstruction of the city of Nimrud and other affected archaeological sites.”

The undersecretary of the Iraqi Ministry of Culture told the media on Nov. 14, 2016, “Despite the massive destruction of Nimrud, Iraq is capable of restoring the site to its previous glory.” However, this does not only require the support of UNESCO, but also funds from within Iraq and the training of locals who can take on the rehabilitation of Nimrud and other archaeological sites.