Calls for support as destroyed Mosul Museum seeks to rebuild

Not much is left of the Mosul Museum, Iraq's second most important museum, after Islamic State militants stole what they could carry and smashed and set the rest on fire. 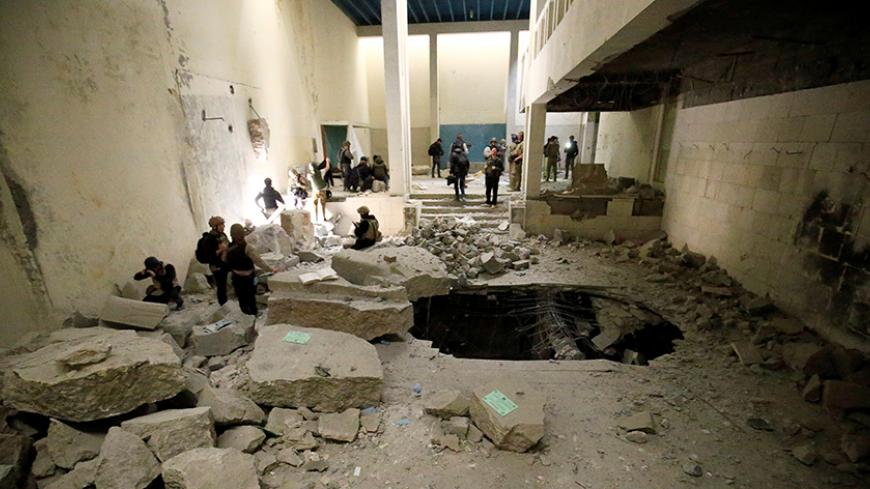 When Iraqi soldiers entered the Mosul Museum on March 13, they were greeted by scenes of enormous damage caused by the Islamic State (IS). Some items had been destroyed or burned, while others had been stolen by IS militants and sold to antiquities traders.

Iraqis and the rest of the world celebrated when the museum was freed from IS' grip, but their joy was bittersweet. UNESCO spokesperson Irina Bokova praised the liberation of the museum on March 9 and described the Feb. 26, 2015, attack on it as a “cultural tragedy.” The Mosul Museum, established in 1952 and considered the second most important museum after the Iraqi Museum in Baghdad, is now charred rubble. The sculptures of winged bulls symbolizing the Assyrian Empire that guarded its gates were both destroyed.

Jalila al-Obeidi, a member of Nineveh's provincial council, told Al-Monitor, “The losses are grave and priceless. They have ruined the facade and the artifacts of the museum. Everything has been stolen and smuggled away.”

The museum's artifacts dated back to the Sumerian and Akkadian eras as well as the Hellenistic era that came three centuries before Christianity. The museum also contained artifacts from Nimrod’s historical city dating back to the 9th century B.C. in the southeast of Mosul, destroyed by IS in 2014. In Iraq, more than 200,000 ancient artifacts have been stolen since 2003.

Faleh al-Shammari, director of antiquities in Nineveh, told Al-Monitor over the phone, “The museum was divided into three sections organized by chronological order. The first section included antiquities … dating back to 3000 B.C. The most important section displayed Assyrian antiquities dating back to over 900 BC, including those found in Nineveh. … They are rare artifacts, unparalleled in the world.” He added, “The museum devoted a section to the Hatra era that dates back to 100 B.C.”

Shammari went on, “The museum also dedicated a corner to the Islamic era, starting with the rise of Islam in the 7th century B.C. until the fall of the Islamic caliphate in 1924. This corner contained valuable Islamic documents, scriptures, symbols and artifacts.” He admitted sadly, “We are currently processing our shock. There is no museum left. It is a haunted place, and its walls have become black facades covered with dust and smoke.”

Today, there is nothing left. IS militants stole all the small antiquities, taking what they could carry. They did not spare the heavier items, which they destroyed with axes or set on fire.

The story of the Mosul Museum is just one in a series of tragedies during the bitter wars that shook Iraq since the 1980s, leaving it with a legacy of looting, destruction and robbery. The National Museum in Baghdad was looted in 2003, and many of its contents were destroyed, while many historical sites suffered illegal excavations, their antiquities stolen and sold.

Former Minister of Tourism Adil Fahed al-Sharshab told Al-Monitor, “The Mosul Museum had shut its doors from 2003 until 2012 due to the war. In 2012, it reopened to visitors.” He said that the first step in restoring the museum is to remove the rubble and assess the losses. He reported that the General Commission of Antiquities is working to find the resources including funding and technical support needed to restore the museum.

Sharshab said that ways to restore the museum and offer it financial support were explored during the UNESCO meeting in February. The management has already requested funding from the federal and local governments to start the work.

Sharshab added, “UNESCO has listed a museum visit on its agenda. A group of international and Iraqi experts will visit Mosul Museum, as they all agree on the importance of restoring it to preserve international cultural heritage.” He called on world countries to work together to find and return the smuggled pieces.