The French excavation mission succeeded in uncovering a network of large water channels, a port, houses and a large temple, as well as clay tablets in the city of Larsa, a capital city in the Babylonian era. 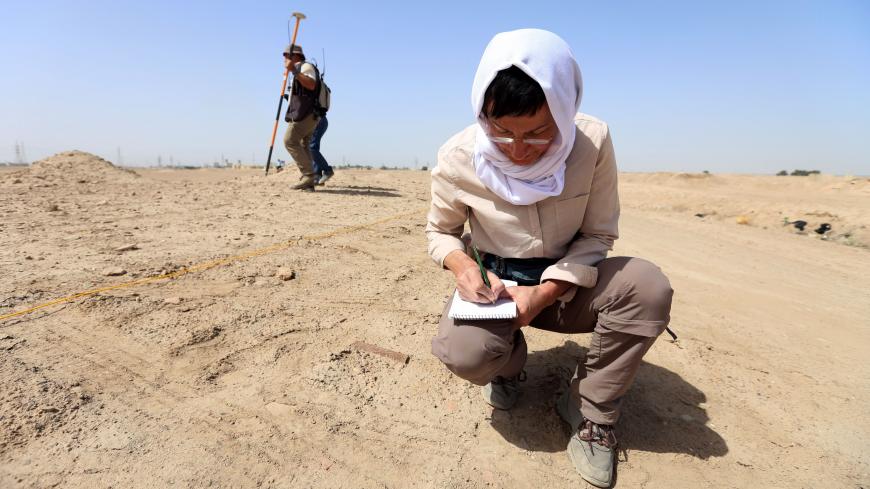 German archaeologists conduct research at the ancient pre-Islamic Arab site of Al-Hirah, about 25 kilometers (16 miles) south of the Muslim holy city of Najaf, on March 7, 2018. - HAIDAR HAMDANI/AFP via Getty Images

The remains of hundreds of historical sites buried in the sands of Iraq still arouse the interest of international exploration missions, which long suspended their activities amid the country's armed conflicts and poor security situation. But today, such works are being resumed with an eye on solving many of the mysteries buried in about 12,000 sites dating back to different eras.

After a 30-year hiatus, the French archaeological mission resumed its excavation July 23 in Larsa, the capital of the Kingdom of Larsa, the first country to be established in the beginning of the second millennium B.C. The mission previously uncovered a network of large water channels, a bridge, a port, housing units and a large temple, as well as clay tablets dating to the ancient Babylonian era.

In 2019, an American archaeological excavation mission from the University of Chicago worked in the city of Nippur (2500 B.C.). The Antiquities Authority in Diwaniyah where the historical relics are located in Iraq's south told Al-Monitor that it had "conducted a comprehensive survey of the city in preparation for a comprehensive excavation.”

Also last year, German archaeologists discovered a 3,400-year-old palace dating to the Mitanni empire, and an Italian team began excavation in Tulul Al-Bqarat, which dates to the Babylonian era, in Wasit province.

In January, a team of Italian and Iraqi Kurdish archaeologists uncovered 10 rock carvings dating to the Assyrian era in Dahuk.

The city of Larsa is of exceptional importance, according to Junaid Amer Hameed, an archaeologist at the State Board for Antiquities and Heritage.  He told Al-Monitor, “The return of a French mission after 30 years of absence heralds a new era of excavations. This is the fruit of cooperation between the Ministry of Culture represented by the State Board for Antiquities and Heritage, the French Institute of the Near East, and the concerned authorities.”

Hameed said a first, brief excavation of the city took place in 1933; more thorough archaeological excavations followed in the 1970s and exploration of Larsa continued until 1989.

He added, “The French-Iraqi mission conducted several geomagnetic surveys, to prepare maps. It succeeded in identifying  the E-Babbar (“Shining House”), temple of Shamash (sun), the city god. It houses a ziggurat that can be spotted from a distance. The mission discovered palaces of an area of ​​about 500 square meters and many Cuneiform tablets.”

Al-Monitor also spoke to the director of the Dhi Qar Museum, Amer Abdul-Razzaq, who said excavations have helped been sources of the museum's antiquities. “Any objects discovered within the province’s lands, including Larsa, are not received by the province’s museum, but are rather sent to the National Museum in Baghdad, which takes the appropriate measures and decides where the pieces shall be preserved.”

Abdul Razzak said some important archaeological pieces that excavators have found at Larsa and elsewhere are kept at the Nasiriyah Museum, which was founded in 1969 and is the second largest museum in Iraq after the National Museum. These pieces include a 6,500-year-old skeleton and a bronze statue of King Ur-Nammu, as well as one of the oldest wheels in Mesopotamia, an important collection of cuneiform on clay cylinders, statues of princes, leaders and Sumerian priests.

The head of the parliamentary committee for culture, tourism and antiquities, Samia al-Ghallab, told Al-Monitor that getting Larsa named a UNESCO World Heritage site is the most important goal. “This will only be achieved by promoting excavation activities that would unearth the treasures hidden in this land that witnessed the emergence of the first kingdoms and states in history,” she said.

Ghallab called on the Culture Ministry and the provincial government to pay serious attention to the city of Larsa, as it documents the history of humanity and not just of Iraqis. “This requires the concerned international institutions, including UNESCO, to support in excavating the relics of the city buried thousands of years ago in the sands of the desert.” She plans to encourage UNESCO to include Larsa on its World Heritage List.

Hussein Jassim Al-Shammari, media adviser to the Iraqi parliament committee of culture, tourism and antiquities, told Al-Monitor, “Iraq hopes the return of the French mission will lead to more discoveries in the city after its 30-year hiatus.” The team is headed by Regis Vallet of the French National Center for Scientific Research.

“The mission unveiled a huge city map designed in an advanced engineering way, proving that there are many archaeological treasures still buried under the soil,” he said. “These must be excavated before they are looted by smugglers, and this will only be done with the use of exploration missions’ scientific programs.”

He said the parliamentary committee for culture, tourism and antiquities seeks to remove all obstacles hindering excavation works, to encourage archeological missions to come to Iraq and to support the excavation plans drawn up by experts. “This falls within the competence of the Antiquities Authority. Our mission is to provide parliamentary support by addressing all governmental bodies.”

Meanwhile, the director of cultural relations at the Iraqi Culture Ministry, Falah al-Ani, said that while excavations have borne the brunt of wars, the foreign archaeological missions are full of spirit. “They have a great desire to discover the buried civilizations of Iraq,” he told Al-Monitor. “They often disregard the security warnings of their country's embassies about the dangers of working in Iraq.”

Ani said, “The Iraqi authorities must provide an appropriate environment to encourage archeological experts to come to the country and save our numerous treasures buried deep in the ground for thousands of years.”