Iraq has signed a contract with a British exploration mission for further excavation at the historic Tell Khaiber site west of Nasiriyah. 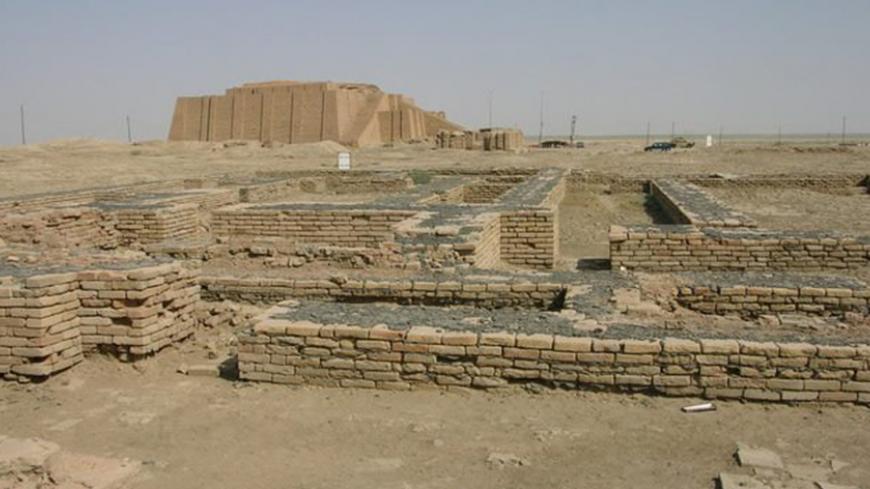 The Tell Khaiber archaeological site in Dhi Qar, Iraq, is seen in this image uploaded to Facebook on Feb. 17, 2016. - Facebook/DiyarunaEN

BAGHDAD — Under a new contract between the General Authority of Iraqi Antiquities and Britain, a British exploration mission to the historic Tell Khaiber site west of Nasiriyah arrived Jan. 16. Iraqis are hoping that excavations will resume at about 17,000 sites, 1,200 of which are found in the province of Dhi Qar in the south, mostly dating back to the era of the dawn of dynasties (2800 B.C.), the Sumerian, Akkadian, Babylonian civilizations, and the Islamic era.

In Iraq's south, there are about 623 of these sites in Babylon, 200 partly buried in Karbala province and 200 discovered ancient sites in Najaf. It is thought that the completion of surveys could cause these numbers to double.

More scientific missions are being deployed across Iraq to excavate the rich land of Mesopotamia and discover the underground archaeological treasures.

In 2013, a team co-led by Stuart Campbell of Manchester University began conducting the first British-led archaeological excavation mission at Tell Khaiber near the ancient city of Ur in southern Iraq since the 1980s. Tell Khaiber is about 375 kilometers (233 miles) south of Baghdad in Dhi Qar province.

Under the new contract, the first between the General Authority of Iraqi Antiquities and Britain since the 1980s, the exploration mission will receive protection and security services from the government and has committed to hand all findings to the government. Under the 1932 Antiquities Law, prospectors must deliver everything they find to the Iraqi National Museum.

The British have discovered a residential city, clay tablets, seals and graves in the ancient city of Ur and at the nearby Tell Khaiber site.

The Ministry of Tourism and Antiquities launched in 2015 a national campaign to protect Iraqi antiquities by documenting archaeological and ancient sites, while encouraging people to report any archaeological materials they may find near their homes. However, what impedes this campaign is the lack of appropriate security conditions, particularly in Islamic State (IS) controlled areas such as the northern city of Mosul and areas where IS still has a strong influence such as Ramadi. Also, the successive wars that have gripped Iraq since the beginning of the 1980s have prevented continuous and systematic exploration works for decades.

Layth Sahar, an activist in the field of protection of antiquities, told Al-Monitor, “The role of security and stability in the detection of many of Iraq’s antiquities that are buried in the sand will promote exploration investment opportunities.” He said, “This will significantly contribute to the world’s participation in bringing out the hidden antiquities to sunlight.”

He added, “Since 2003, the year in which the political system changed and the country opened up to the world at the cultural level, Iraq succeeded in attracting scientific missions of universities and prospectors from different countries, albeit insufficiently, as the large number of available archaeological sites requires further cooperation with foreign expertise.”

He said, “The excavations should not be postponed amid the continuing stealing of antiquities on the part of smugglers. Also, a large number of antiquities were lost and damaged due to environmental conditions such as rain.”

Rain that fell on ancient hills and other areas on April 5, 2016, washed away about 74 archaeological pieces located above ground and dating back to the Babylonian era in the ancient city of Babylon.

One example of how exploration works have been expanding in Iraq is the Italian mission that started excavating on April 14, 2016, in the center of Wasit province, in cooperation with the Wasit Inspectorate of Antiquities and Italy's University of Turin.

And on Dec. 15, a UNESCO mission visited the Nimrod archaeological site in Ninevah province in northern Iraq to assess the extent of the damage there; the site was largely destroyed by IS after it took control of the region in June 2014.

Amer Abdul-Razzaq al-Zubaidi of the Dhi Qar Antiquities Inspectorate told Al-Monitor that there has been an increasing amount of archaeological activity. He said, “Iraq has already begun to attract foreign exploration missions to its territory, especially in the central and southern regions because of the stability of the security situation, people’s cooperation with the missions in those areas and the help of the antiquities departments of the provinces in question.”

He said there are several missions currently working in Dhi Qar province, namely, the Italian mission in ancient Tel Abu Tbeirah and Tel Zerghol, the British mission in Tell Khaiber, the US mission in the ancient city of Ur, the Slovak mission at the Uma site and the French mission in the city of Kerso.

Asked about the projects and the potential harnessed for the excavations, Ajyal Salman, the chairwoman of the Tourism and Antiquities Committee in Dhi Qar, told Al-Monitor, “The parliament’s Finance Committee managed to obtain approvals for the allocation of 90 billion Iraqi dinars [$75.8 million] to develop archaeological areas.” She added, “The Dhi Qar province share will be larger because of the many archaeological sites it contains.”

Salman called on “archaeologists, prospectors and teachers to contribute to the detection of ancient civilization landmarks buried under the ground in Iraq for thousands of years.”

She also revealed “a promising plan of action for the development of archaeological areas, especially considering that Iraq attracted more than 6,000 tourists per month during 2016,” and that “Iraq’s civilization concerns all peoples of the world because it wrote the human history on earth.”

Iraq has a plan that goes beyond attracting foreign missions. It plans to establish Iraqi scientific groups that can carry out excavations aimed at rehabilitating archaeological sites through “national” efforts. These sites will be turned into investment projects that introduce the civilization of Iraq to the world and generate funds that contribute to enhance and develop exploration capabilities.