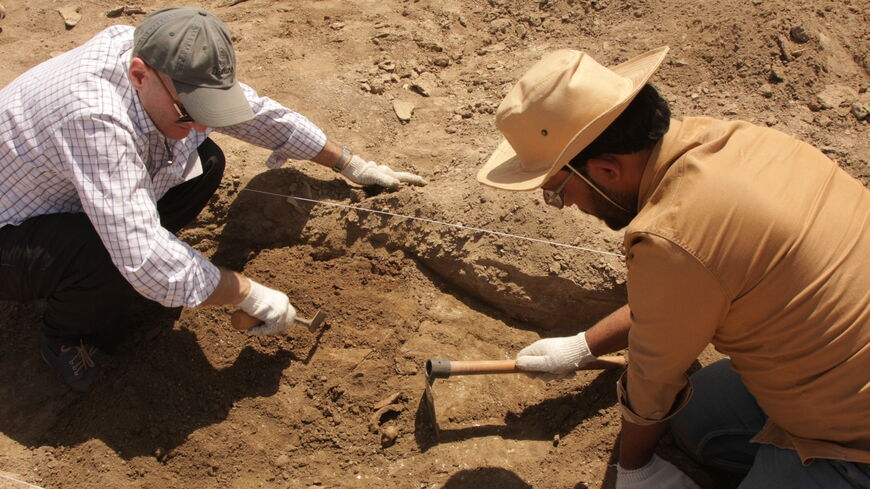 Shahmardnan Amirov, the project co-director, at work on the sounding with the Iraqi official representative Amjad Neama. - Alexei Jankowski-Diakonoff, 2021

An Iraqi-Russian team of archaeologists completed on April 29 the first archaeological soundings of a previously unexcavated ancient settlement about 4,000 years old in Dhi Qar governorate in southern Iraq.

The Dhi Qar governorate is home to more than 1,200 archaeological sites, including Ur with its great Ziggurat dating from the Sumerian period.

Soundings are the first phase of an archaeological investigation that involve digging test  pits to determine the composition of cultural deposits under the surface.

Alexei Jankowski-Diakonoff, head of the Russian excavation mission, told Al-Monitor, “This site, a mound of about 47 hectares [116 acres] slightly elevated upon the surrounding floodplain, conceals one of the most important ancient cities of what is now called Sulaibiyah. During at least four millennia, from the Ubaid period until Neo-Babylonian times, a branch of the Euphrates was flowing there, that the ancients called ‘the river of the Eridu plain.’”

He added, “In 1965 this mound was shown by the local inhabitants to the American archaeologist Henry Wright, who registered it as “Tell 34” in his survey of the Eridu plain. In 2003-2008, Iraqi archaeologist Dr. Abdulameer Al-Hamdani, then-Inspector of the State Board of Antiquities and Heritage for Dhi Qar, surveyed an important part of Dhi Qar during his fight against widespread and catastrophic lootings of the archaeological sites of the south. Thanks to his work and the intervention of the Italian Carabinieri, the Italian archaeological police then present in Iraq, Tell 34 suffered less from looters than other great ancient settlements, some of which were lost for future scientific research.”

Jankowski-Diakonoff notes that, based on his surveys, “Hamdani put forward a hypothesis that Tell 34, to which he gave the name of Tell Dehaila, was the capital of the First Sealand Dynasty, a mysterious state very important for the study of the world history.”

“The previous excavations of great Sumerian cities — such as Ur, Larsa, Uruk and Nippur — showed that in the second half of the 18th century BCE the south, that belonged then to Hammurabi’s Dynasty of Babylon, suffered a systemic collapse with an interruption to the urban life, which marked the end of the Sumerian world. The language survived, but only as a literary, not spoken, one. Meanwhile the writing and culture persisted for almost a millennium and a half more.”

The head of the Russian mission explained that this has importance not only for Iraqi history, but for the study of world history as a whole. “It is important to understand how the ancients coped with great systemic crises — how and if they managed to maintain their statehood, or, on the contrary, whether they let the society leave the urban centres and auto-regulate on its own.”

“This is why the archaeological investigation of Tell Dehaila, which is undoubtedly related to the history of the late Old Babylonian times — during the onset of the great crisis — is so important.” 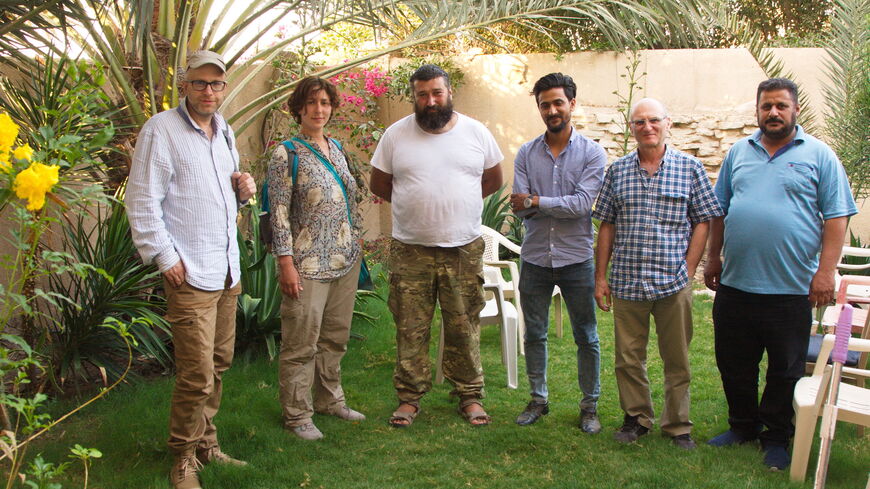 He noted that there are other unique factors to this find that afford it great importance. “This is the only Old Babylonian city of this scale (it is almost as big as Ur), which is situated on the edge of the Arabian desert and was therefore the first point of contact between the settled agricultural population of the Euphrates plain and the nomads, who played a big role in their history. Among the finds of our season were two figurines of dromedaries, probably used as toys for children.”

He said that large walls of the Old Babylonian style are the most important find from the site. They are “situated in the central part of the city where Al-Hamdani expected to find the sacred plot of the city, the ‘temenos.’ The aspect and disposition of walls supports his suggestion. There are also other signs suggesting that Tell Dehaila was settled not earlier than in the 19th-18th centuries BCE, not very long before the crisis. To decide whether it served as a refuge for the population of Ur, when it was destroyed by Hammurabi’s son Samsuiliuna in his revenge against a revolt in the south, much further research is needed.”

Dr. Shahmardan Amirov, lead researcher of the Institute of Archaeology of the Russian Academy of Sciences, said in a statement that the team expects a real opportunity to “find cuneiform documents in an undisturbed archaeological context, which will be extremely important not only to Russian scientists but Mesopotamian archaeology as well.”

Jankowski-Diakonoff  said, “In 2019, the joint Russian-Iraqi mission obtained an official permit from the Directorate of Antiquities within the Iraqi Ministry of Culture to conduct archaeological research at two sites in southern Iraq — in the governorates of Maysan and Dhi Qar, situated at the extremities of the ancient marshland of Mesopotamia, the birthplace of the urban society, writing and state.”

Amer Abdel Razak, antiquity director in Dhi Qar, told Al-Monitor, “The discovered city is located 70 kilometers [43 miles] southwest of the city of Nasiriyah [in the south] in the Sulaibiya depression, which is home to a large number of unexcavated archaeological sites. It is close to the city of Eridu — the oldest and greatest city where kings are said to have descended from heaven, according to Sumerian legends.”

He said, “The site was discovered before the arrival of the Russian mission. It was registered in the Dhi Qar Antiquity Department as an extremely significant archaeological site."

Abdel Razak noted that, despite the hardships and obstacles in working on-site because of the coronavirus pandemic, the Russian mission was able to make important discoveries.

Abdel Razak added, “Dhi Qar is expecting visits by international universities and museums in October, including 10 Italian, American, French, British and Russian missions that are set to explore this vast area.”

Gaith Salem, professor of ancient history and civilization at Al-Mustansiriya University, told Al-Monitor, “There are many cities that have been discovered in southern Iraq over different periods of time but there has not been much talk about them.”

He called for “the development of systematic work within a fixed program to unearth the treasures of history, which are not important only to Iraq, but all humanity.”

He said, “This recent discovery is of paramount importance because it introduces the world to one of the Sumerian cities overlooking the seaports. Most cities used to have a view to the sea but have turned today into a vast desert."

Karrar al-Rawazeq, an archaeologist and member of the Muthanna antiquity rescue team, who participated in several excavations, told Al-Monitor, “Exploration and excavation works in the area will yield economic and cultural benefits only if the site was turned into a tourist and investment destination, which would attract funds and tourists.”

In this regard, Sumaya al-Ghallab, head of the Culture, Tourism and Antiquity Committee in the Iraqi parliament, spoke to Al-Monitor and called for “securing the necessary funds and protection for excavation teams, and following a strategy for an excavation and research process covering the entire archaeological map in Iraq.”

Correction: Aug. 11, 2021. This article has been updated to correct statements incorrectly attributed to Alexei Jankowski-Diakonoff, and to add additional contextual information.