Iraq's ancient city of Ur: source of law, site of wonder

Tourists are slowly beginning to return to the ancient Sumerian city of Ur, a UNESCO World Heritage Site, raising hopes among some locals. 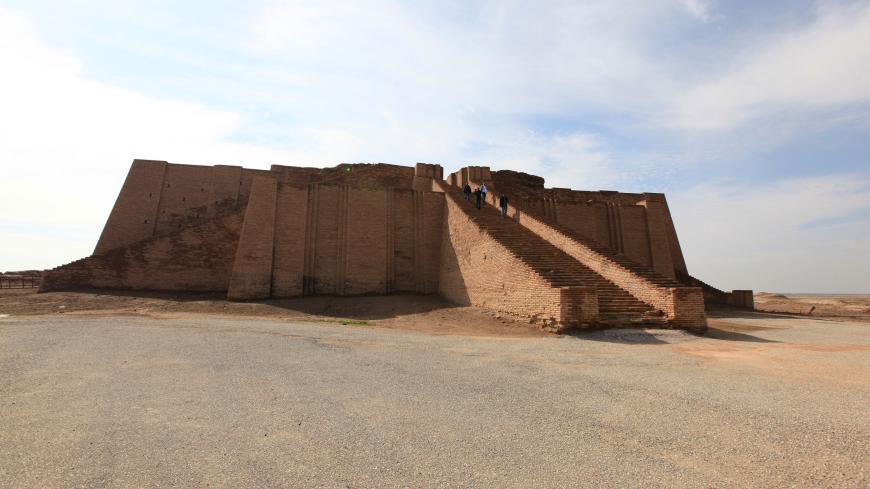 Walking toward the Ziggurat of Ur, a massive Sumerian temple dedicated to the moon god Nannar, tourists often can't help but express their awe. Representative of their excitement is one visitor who remarked, “It’s incredible! I studied it when I was at the primary school! My heart is beating like a drum!”

Ali Zughair, a professor of computer science at the Institute of Technology in Nasiriyah and a civil society activist, is used to overhearing such remarks when he accompanies tourists and students to the archaeological site of Ur, which in the 2nd millennium BCE was one of the most important Sumerian city-states in ancient Mesopotamia. The site is located a mere 16 miles from Nasiriyah, the capital of Dhi Qar province, in southern Iraq.

“I feel so happy that people are coming to visit our area,” Zughair told Al-Monitor. “After years of war and devastation, we want to show off this unique site to the world.”

With some 60,000 inhabitants, Ur, the “world’s first great cosmopolitan city,” symbolized the wealthy Sumerian empire at its peak, around 2000 BCE. Part of the interest in it and part of what makes it fascinating is Ur's modern day reputation for being the “hometown” of the Prophet Abraham. “As Abraham is considered the father of monotheism, his birthplace should attract millions of people every year, like any other pilgrimage site,” said Zughair.

According to local resident and tourist guide Daif Mohsin, however, there is no archaeological evidence that Abraham was born here, as many studies note. “He’s considered the ‘Father of the Prophets,’ but no historical references exist [of him] except from in the Bible,” Mohsin told Al-Monitor.

Despite this historical inconvenience, there are plenty of other reasons to recommend Ur. “The first legal code was written by the King Ur-Nammu in Ur,” Mohsin explained. “The Code of Ur-Nammu, dating back to 2100-2050 BCE, is older than the [Babylonian] Code of Hammurabi.”

Ur's fate in the modern era has, unsurprisingly, been shaped by political and military developments in Iraq. “The site was chosen by Pope John-Paul II as the starting point of his pilgrimage to the Holy Land and Egypt, [but] in the end, the pope skipped the visit to Iraq, in 2000, for security reasons,” Mohsin explained. “In 2013, the Opera Romana Pellegrinaggi, which organizes pilgrimages throughout Europe and the Middle East, added Ur to its tours, but after a year, when the Islamic State [IS] occupied a third of Iraqi territory in 2014, the tours had to stop.”

After the security situation began to improve with the rollback and ultimately the defeat of IS in Iraq, things began to look up for Ur and the local population. In 2016, UNESCO added Ur to its World Heritage List, along with archaeological sites at Eridu and Uruk and the Iraqi marshlands, all of which are in Dhi Qar governorate.

“Tourists are starting to come again, even more than before the ’90s,” Mohsin said, noting that the numbers are still limited, but that increasing numbers of Iraqi nationals as well as some foreigners can now be found at the site.

In addition to tourists, scores of archaeologists from various campaigns travel to Ur each year to work in the area. “Archaeologists have dug only 20% of the city of Ur,” said Mohsin. “In the entire province, we estimate there are a hundred years of excavations still to do.”

Several archaeological expeditions remained active in the area after IS’ military campaign approached Baghdad, some 225 miles to the north, in 2014. Foreign digs had come to a standstill after the 2003 US-led invasion and subsequent sectarian violence and uncertainty from 2006 to 2008. In 2017, an Italian-Iraqi team in Abu Tbeirah led by Licia Romano and Franco D’Agostino from the University of Rome, La Sapienza, identified a port dating to the third millennium BCE near Ur.

“The discovery was great, but our mission is not only archaeological,” Romano told Al-Monitor. “Through our work, we want to change the Western image of Iraq and bring tourists and pilgrims here. My mother, from Sicily, came to visit me in Iraq as a tourist. We need to challenge the idea that Iraq is only a war-torn country or hostile environment.”

Other expeditions include additional experts from Italy as well as from Germany, the United Kingdom and the United States working in cooperation with Iraqi colleagues. Local residents and archaeologists became more optimistic about future campaigns when the Iraqi archaeologist Abdul Amir al-Hamdani, who is originally from the area, was appointed culture minister in December 2018.

For a chapter in “The Destruction of Cultural Heritage in Iraq” (2008), edited by Peter Stone and Joanne Farchakh Bajjaly, Hamdani explained that some of the damage suffered by Ur during the Saddam Hussein era and after the US military occupied an existing air base near the site is irreparable.

“Tourism as well as archaeological missions are a great opportunity for us,” Zughair said. “We want to cooperate and create a network to reinforce Nasiriyah’s youth and create job opportunities.”