In spite of the precarious situation in Iraq, a series of excavations is still uncovering the buried historical ruins in Iraq, where the ruins of Ur are only a sample of the landmarks that are yet to be unveiled. 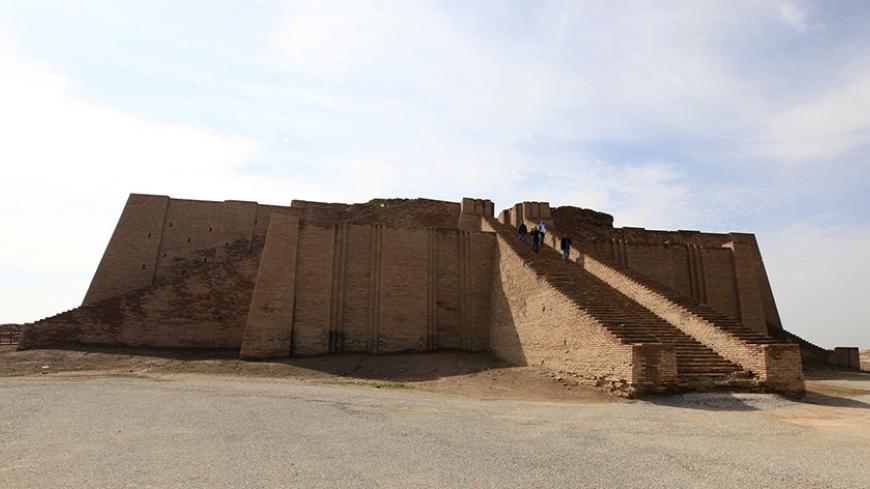 People stand on the steps of the Ziggurat of Ur ruins near Nasiriyah, 300 kilometers (186 miles) southeast of Baghdad, Jan. 23, 2014. Ur's palaces and temples lie in ruins, but its hulking Ziggurat still dominates the desert flatlands of what is now southern Iraq, as it has for millennia. - REUTERS/Ahmed Saad

NASIRIYAH, Iraq — At the beginning of February, a British archaeological excavation mission unveiled at the ruins of Ur a large trade center that is the oldest in the world, going back to the Old Babylonian period (2006-1595 BCE). Ur is a historical site in Sumer city mentioned in the Old Testament and located in Dhi Qar province, 375 kilometers (233 miles) south of Baghdad.

This discovery confirmed the exceptional importance of the ruins of Ur, which are still unexplored. Despite the poor security situation in Iraq, archaeological excavation has been accelerating in recent years, in search of ruins still buried in this area.

In early March 2013, a British excavation mission discovered the remains of a massive ancient temple by using satellite imagery.

Given the historical importance of Ur, Al-Monitor contacted journalist Alaa al-Kouli, who lives near the ruins of Ur and accompanies researchers and foreigners on their visits there. He proposed a field tour to visit the place of the famous Ziggurat, where the moon god Nanna was worshipped.

The drive from the center of Nasiriyah city is 16 kilometers (10 miles) into the desert part of Nasiriyah. As the features of the archaeological site appeared, Kouli pointed to the dozens of small and large hills that have not been explored yet. He also pointed to holes that he said were dug by thieves who made off with hundreds of artifacts. He said, “This happened especially in 2003, the year when the regime of former Iraqi President Saddam Hussein fell and most of Iraq plunged into a massive security chaos.”

As he was talking, the famous Ziggurat of Ur appeared from afar. It was built by King Ur-Nammu in about 2100 BCE to worship the moon god.

After looking at the Ziggurat from up close, Kouli suggested a visit to the house where the prophet Abraham was born. Abraham’s life story appeared in the book of Genesis and in Quranic stories; he is called the father of the prophets. The house is located in what was possibly a residential complex, 500 meters (1,640 feet) from the Ziggurat. Muslims and Christians still visit it.

In fact, the whole place consists of ruins of houses and buildings in the vast desert. One can see the foundations of brick structures that were covered by sand for hundreds of years.

Among these ruins was a digger who declined to give his name. He told Al-Monitor that in the last few months the archaeological missions found a large number of clay documents inscribed with cuneiform characters as well as pottery and various other tools, which he saw himself.

The site had few visitors, most of them tourists from Turkey and Iran. A number of Iraqis were examining the place and taking pictures. There was a marked absence of signboards explaining what the visitors were looking at.

Al-Monitor contacted archaeological explorer Amer Abdul Razzaq, one of the supervisors of the excavation works. He described the ongoing excavations in Nasiriyah province, saying, “There’s an Italian team currently working in Tel Abu Tabiri in Nasiriyah city center and in Tel Zurghul, located in Diwaniyah province, 55 kilometers [34 miles] northeast of Nasiriyah. There is also a British team digging in Tel Khaibar, located in Batha, 35 kilometers [22 miles] west of Nasiriyah city.”

Abdul Razzaq shared the latest discovery: commercial records that include the distribution and the pricing of grains, dating back to the reign of the Babylonian King Hammurabi (1792-1750 BCE).

Abdul Razzaq said some concerns should be addressed, explaining, “Although there are some 1,200 archaeological sites in many areas of the province, there are no more than 100 guards. This tempts thieves to conduct illegal digs.”

On the positive side, there are a lot of on-site excavation activities. According to Ajyal al-Moussawi, the chairman of the Committee of Tourism and Antiquities in Dhi Qar, there is a promising future for archaeological excavations and for transforming this region into a modern tourist center that attracts investments and cash to the province. He added, “A French mission will dig in the Karso archaeological site, situated in Nasr, 60 kilometers [37 miles] north of Nasiriyah, in October 2015. There is also an American team that will start work in September. The American team is headed by Elizabeth Stone of New York University. In late 2015, an Italian team will dig in the city of Eridu, west of Nasiriyah.”

Yasiri pointed out that one of the biggest problems facing the ruins of Ur is “the military air base built on site grounds in the 1980s — the Imam Ali Air Base, which was built over ancient hills and caused noise and pollution.”

Today, there are hundreds of historical archaeological sites in Iraq that have not been excavated and are explored by thieves who steal priceless artifacts. The Iraqi government should benefit from Western expertise in the field of drilling and preserving antiquities. It should seek professional and technical help from UNESCO as well as experts to preserve antiquities and drill into hundreds of buried historical sites. These sites should be protected from theft and networks of antiquity traders through developed security measures. The historical sites should also be turned into touristic and research projects through investments that would provide the money needed for the protection and development of the sites.

by Murielle KASPRZAK and Joseph SCHMID | AFP | May 26, 2022
END_OF_DOCUMENT_TOKEN_TO_BE_REPLACED