Archaeologists have resumed excavations at the site of the ancient city of Lagash in Iraq, but so have smugglers. 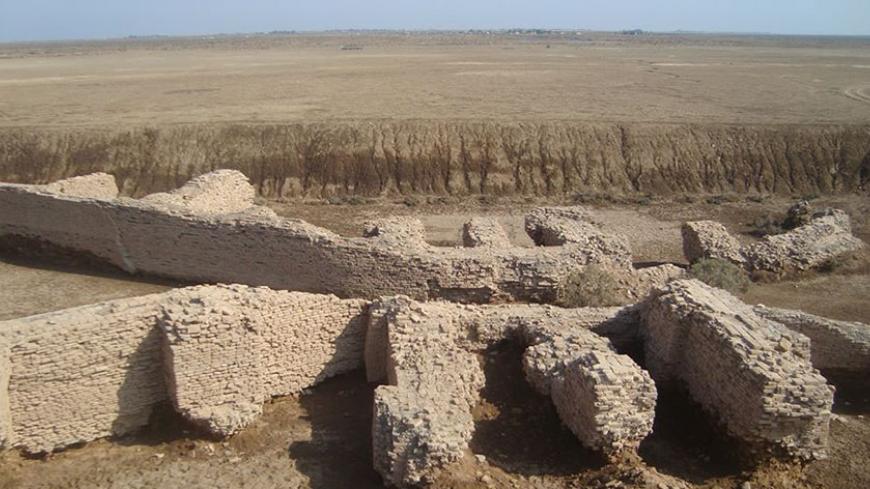 NASIRIYAH, Iraq — The United Nations Educational, Scientific and Cultural Organization (UNESCO) added Iraq's Ahwar marshes, including the sites of Uruk, Ur and Tell Eridu, to its World Heritage List on July 17. Iraq has many other sites deserving of such recognition, among them the ancient Sumerian city of Lagash.

A desert wind has been blowing for hundreds of years over the hills of Lagash, today's al-Hiba, in al-Dawayah district, north of Nasiriyah. There have been intermittent excavations since the city was first excavated by a group of German archaeologists led by Robert Koldewey in 1877, but the majority of the city's ruins remain buried beneath sand.

What distinguishes the site from many others is that it extends over a large area, some 15 square miles. The city of Lagash was the political capital of the Lagash city-state. The site is considered an archaeological treasure in the Middle East.

Amer Abdul Razzaq, the director of the archaeology department of Dhi Qar province and lecturer in the faculty of archaeology at Baghdad University, told Al-Monitor, “Lagash is one the most important Sumerian cities in the Shinar plain in Iraq, where the first Sumerian cities emerged more than 4,000 years ago. Lagash was the most important one founded by King Ur in 1900 B.C., with its temples and palaces.”

He said, “The excavation works have revealed valuable artistic, literary, cultural and religious relics, most important, the mud paintings with cuneiform writings by the thinker and writer Dudu and other relics highlighting the beginning of writing and the invention of the pottery wheel and schools.”

Abdul Razzaq added, “Only 5% of the city had been excavated, as work came to a halt because of the Iraq-Iran War [1980-1988]. The last archaeological mission had been in the 1980s. At the moment, there is a French mission working in the religious center of Lagash, Girsu.” Indeed, a French archaeological mission resumed excavations at the site on Nov. 5, 2015. In 2013, French Ambassador Deni Gauer visited Lagash and promised that his government would support further work at the location.

Unfortunately, the site is also being “excavated” by thieves, who are well aware of the lax and rudimentary security measures over this vast area. Abdul Razzaq said, “There are only 13 guards at the religious capital in the city and the political center. The tribes living in the vicinity of the city have noticed the illegal excavation works and thefts at the site and have been keen on chasing after smuggling gangs and preventing them from entering the site.” In 2009, a smuggler was arrested in possession of eight pots dating to the reign of Lagash Prince Gudea, who ruled circa 2144-2124 B.C. One of the jars bore the Sumerian inscription “I am the prince of Lagash City, Gudea.”

“While passing through the area, some nomads and shepherds come across antique pieces and relics that emerge without excavation, due to soil erosion and rainwater,” Alaa Kouli, a journalist and writer who lives in nearby Shatrah, told Al-Monitor. “Much of the excavating at the site is illegal.”

The Dhi Qar Council reported on its website in 2015 that mud paintings had been stolen from the site before eventually ending up in museums. Some 30,000 mud slabs with cuneiform writing have been found in a temple.

A string of light brown hills welcomes visitors to the site. “They are the remains of the 50 temples of the city of Lagash and date back to the Gutian era, during the reign of King Gudea, the most famous [king], who revived Sumerian literature and humanities,” Abdul Razzaq said. “It is not easy to access the city of the Lagash given the surrounding marshes. Excavators usually use a small boat to get to the site.”

In July 2003, Henry Wright, a professor of Near Eastern archaeology at the University of Chicago, visited Dhi Qar province, which is home to hundreds of archaeological sites. He called the province a “relic museum” that needed local efforts backed by financial and technical international support to rehabilitate the area's heritage, which he said did not belong to Iraqis only, but to all peoples and histories.

Mouna al-Ghurabi, a parliamentarian from Dhi Qar, told Al-Monitor that Western archaeologists, international financial and technical organizations and tourism companies will not invest in Lagash and other archaeological sites across Iraq until security is established in the country, “In Baghdad, there are several exploration missions that have showed a willingness to start working in Lagash and other archaeological areas, but their decision depends on security stability,” she said.

“The Iraqi government ought to develop the monument protection police, increase the number of guards deployed at the sites and install sensors and surveillance cameras at archaeological sites to help prevent the widespread theft of antiquities,” she added. Ghurabi also criticized the “lack of interest in relics and archaeological monuments in the community, particularly in al-Hiba, as there are no voluntary cultural awareness campaigns to raise awareness about the importance of the city and the need to preserve it.”

Community-based efforts and lobbying through media and cultural events to communicate with international organization, such as museums, universities and institutes, could also help arrive at possible ways and means to save Iraq's relics.