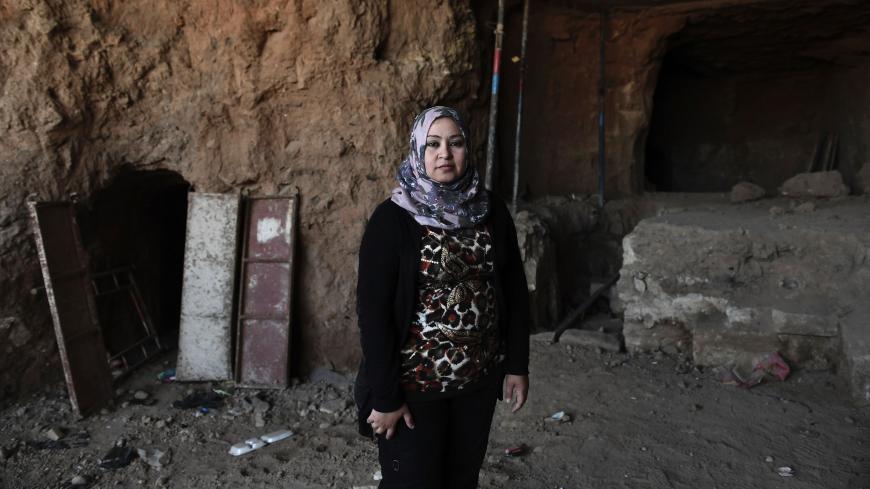 Layla Salih, head of Antiquities for the province of Nineveh, of which Mosul is the capital, poses in front of an underground tunnel in east Mosul on March 6, 2017. - ARIS MESSINIS/AFP/Getty Images

When Layla Salih walks amid the rubble of Mosul with her quick, soft steps, she knows exactly where she wants to go. Whether in the Old City of Mosul, in Nimrod, or at a spot where some of the Mosul Museum’s antiquities were destroyed, Salih knows that rubble can often hide remnants of destroyed artifacts that can be put back together if one has the drive and patience to do so.

After graduating from the University of Mosul in 1999, Salih dived straight into archaeology. Until 2009, she worked at the Mosul Museum. In 2012, she was appointed as head of the Heritage Buildings in Antiquities Board of Ninevah province, the provincial section of the State Board of Antiquities and Heritage of Iraq. Meanwhile, she continued her academic studies and completed a master's degree in Islamic archaeology at Baghdad University in 2013.

A few months after she received her postgraduate degree, she had to flee her beloved city, following its occupation by the Islamic State (IS), moving along to Kirkuk, Baghdad and Erbil.

“During the three-year occupation of our city, it was really hard to watch how IS was destroying our common ancient culture, the Mesopotamian cultural heritage that we all belong to,” she told Al-Monitor, cringing as she remembered propaganda videos the terrorist group would put online every few months to show to the world the destruction the group had wreaked on non-Muslim heritage.

When the Iraqi army started its operations to liberate the Ninevah Plains from IS in October 2016, she immediately followed the soldiers to visit the archaeological sites destroyed by the terrorist group.

The only worthwhile “gift” left by IS' devastation of Ninevah was an unprecedented unearthing — that of an Assyrian palace beneath a destroyed mosque. “I knew [this Assyrian palace] was there, under the Nabi Yunis Mosque [named after the Prophet Jonah, who is believed to be buried in there]. But in our excavations in 2004-2005, we could not proceed further because of the mosque and the holy shrine,” she told Al-Monitor.

But when IS bombed the Nabi Yunis mosque on July 24, 2014, the 2,700-year-old palace, built by Esarhaddon, who ruled the Assyriam Empire for 12 years in the early seventh century B.C., came to light. The excavation team — which consisted only of Salih and her colleague Faisal Jeber — found two lamassu (the Assyrian protective deity depicted as having a human head and the body of a bull or lion and bird wings) and an unusual pair of reliefs, each showing a row of women.

“The lamassu and the reliefs were still under the tunnels — the same tunnels where IS used to exploit their prisoners for the excavations and then smuggle the antiquities to sell them in the international archaeology black market,” Salih said.

“When IS blew up the Nabi Yunis Mosque dedicated to the Prophet Jonah in July 2014, I thought that was the moment a rebellion against IS could have happened. But it didn't,” Jeber, a geologist who works with Salih, told Al-Monitor, pointing out that the Nabi Yunis Mosque was a pilgrimage site for both Christians and Muslims and visited by other local religious and ethnic minorities of the vibrant multicultural city.

Salih and Jeber co-founded the Gilgamesh Center for Antiquities and Heritage Protection to document the post-IS destruction and looting during and after the battle for Mosul.

“At some point in the battle, local people in Nimrod took stones from the archaeological sites because they needed materials to rebuild their damaged houses,” Salih told Al-Monitor, explaining that some of the destruction was out of necessity, not material profit or ideology.

“In fact, there are no ideological motivations at all: IS militants sold the large majority of pieces they claim as anti-Islamic. [In fact, it was mainly] a well-organized business for them,” she added.

“When the mosques, the churches, the synagogue and the archaeological sites are renovated, that's the moment when our Mosul will be alive again,” Jeber said.

Salih visited all the areas of the severely damaged Old City of Mosul to assess the damage and needs of the local population trying to return home. “One of my priorities is to talk about the reconstruction of Mosul,” she said while visiting the ancient Jewish neighborhood together with Al-Monitor. “My thesis was about the Sasoon synagogue of the area. The Jews constituted a dynamic community in Mosul until the 1950s and we have lost them as neighbors and as part of our history and heritage,” she said, referring to the forced migration of Jews from all over Iraq.

Salih’s role for her community goes beyond archaeology. She worked for Amnesty International in the camps for Iraqi displaced persons to document violence against IS women. She also cooperated with the Italian nongovernmental organization Un ponte per… (A bridge to, or UPP) in clinics for women in Mosul, conceived as safe spaces to guarantee health and psychological support to women and girls who suffered gender violence during the three years of the Islamic State’s occupation. She is still involved in a project implemented by UPP, “Bridging communities in Ninewa Governorate,” aiming at building peace, promoting social cohesion and ensuring safe return of displaced people to their homes in Ninevah.

During a brainstorming meeting with her fellows at the Book Forum Cafe in east Mosul, Salih talked about the transformative role her profession can have: “I didn’t want to become an engineer, teacher or doctor. ... I chose archaeology. It reunited all what I am and I believe in — a cultural, political and peace-building, empowering profession, especially for a woman in the field. Only through my work can I have hope again,” she said.