Ninevah’s renowned cultural heritage museum, known for the Islamic State's disastrous attack on its treasures, has finally reopened to the public. 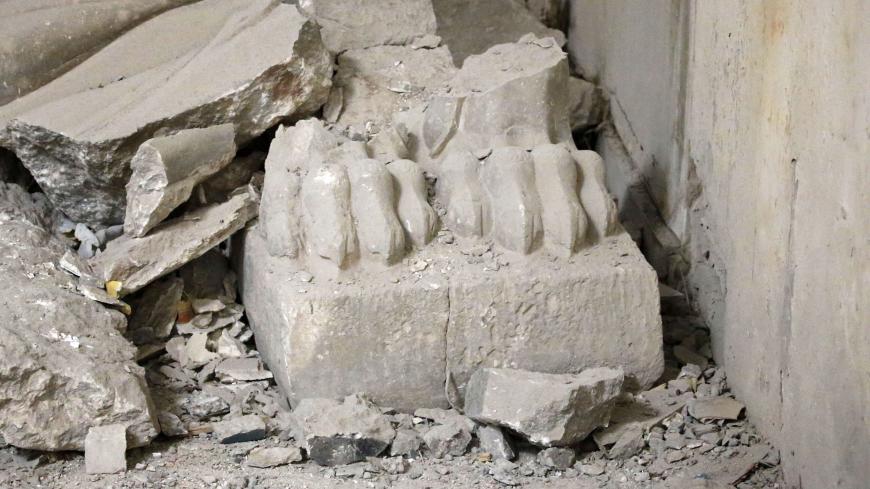 The carved feet of a destroyed statue of a lamassu, an Assyrian deity often depicted as a winged bull with a human head, stands inside the destroyed museum of Mosul on April 2, 2017, after Iraqi forces recaptured it from Islamic State fighters. - AHMAD GHARABLI/AFP via Getty Images

Before 2014, Iraq's Ninevah province was home to five museums of natural history, modern art and antiquities. Within a year, that number fell to zero.

Six years later, Ninevah welcomed the public back to the antiquities museum in Mosul, regarded by some as the region's crown jewel of cultural heritage.

The museum has a tumultuous recent history. Its most recent ransacking was committed by the Islamic State and began in 2014. The extremist group destroyed or looted hundreds of artifacts.

On Nov. 22, the museum opened for a sculptural exhibit by Omar Qais. Mosul lies in what was an important part of the ancient Assyrian empire, and Qais showcased figures from this era including sculptures of the lamassu, Sargon II, Sennacherib and Ashurbanipal. During the Islamic State's reign in Mosul, Qais kept his artwork hidden in a workshop in his father’s basement. Now, he wants to show the world that Mosul’s deep cultural history was not destroyed.

“We are alive and we still hold our historic identity, we love our roots and the glory of that age,” he said. “This city was a capital city of the Assyrian empire. I wish to make it shine with Assyrian monuments and buildings and to be a tourist destination for everybody.”

The museum also opened in January 2019 to host a six-day contemporary art exhibit called "Return to Mosul." The exhibit was hosted in one building while most of the site remained closed for restoration work. In June, despite the ongoing construction, Mustafa al-Kadhimi declared the museum open in his first visit to the city as prime minister. This month’s opening was larger than previous events, Salih said, as more of the building was accessible to visitors and art was displaced on the main floor.

For nearly three decades, the museum has been rocked by invasions, looting and extremist groups. In 1991, the museum closed due to the Gulf War. It reopened in 2000, but closed again only three years later with the US invasion. Some of the museum’s artifacts were sent to the National Museum in Baghdad after 2003, Mosul’s now exiled Gov. Atheel al-Najaifi told Rudaw. The Baghdad museum's director, Fawzye al-Mahdi, seemed to dispute Najaifi’s comments in his interview with Germany’s Deutsche Welle, saying, “None of the artifacts are originals. … They were copies.” There were also reports of looting at the Baghdad museum in 2003 by the time US troops arrived, with as many as 15,000 artifacts taken in April 2003. In 2011, the Mosul museum opened once again, but access was primarily limited to school groups and special visitors.

During its 2014 occupation of Mosul, IS attempted to eradicate the city’s cultural history. The extremist group burned Mosul’s library, home to over 8,000 rare books and manuscripts. It produced a video of the destruction of artifacts at the archaeological site in Nimrud, including an original lamassu.

The antiquities directorate, in the same area as the museum, was used as a diwan or large hall that served as a senior level meeting place, a tax office to collect dues from Islamist fighters and a holding area for items as diverse as antiquities from the museum and petrol. In 2017, Iraqi forces retook the museum.

“The reopening of the museum will help to bring back what normal life looked like in Mosul before [IS],” said Helen Malko, an Assyrian archaeologist and program manager at Columbia University’s Global Center in Amman.

Efforts to rebuild and repatriate artifacts to the museum are ongoing. In 2018, the ALIPH organization, a Swiss-based group that works to protect heritage in conflict areas, committed about $1.3 million to rehabilitate the museum over five years in partnership with the Louvre Museum, the Smithsonian Institution and the Iraqi State Board of Antiquities and Heritage. Just two months ago, during a state visit to the United Kingdom, Kadhimi announced the British government would return nearly 5,000 artifacts to the country, including a 4,000-year-old Sumerian plaque discovered for sale online in May 2019. The items are expected to be delivered next year.

Today, the museum is working to revive cultural activities to complement the ancient artwork. Salih told Al-Monitor she worked with the German development agency GIZ to develop a tool for the museum’s visitors to explore its deep history, especially that of minority groups in the Ninevah Plains. The agency will launch a new training program with participants from the region next year, Salih said without giving any more detail.

Today, despite the growing influence of armed militias and uncertainty over what a US troop withdrawal means for Iraq, perhaps this latest reopening will be more permanent.

“We’re going to use cultural heritage as a means for peace-building,” Salih said