The visit of the Iraqi prime minister to Washington led to the recovery of thousands of smuggled artifacts, including the Assyrian Gilgamesh tablet, leading the premier to announce the reopening of the Iraqi National Museum. 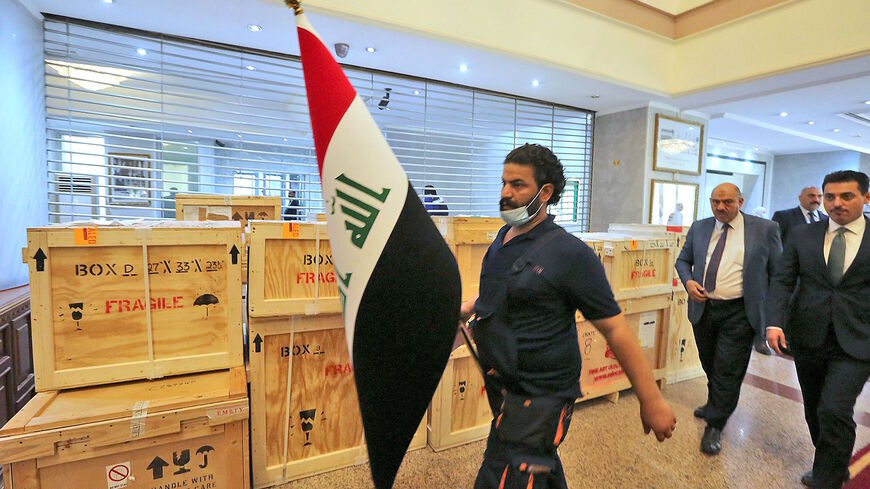 Staff members at the Ministry of Foreign Affairs pass crates of looted Iraqi antiquities returned by the United States, ahead of a handover ceremony at the ministry, Baghdad, Iraq, Aug. 3, 2021. - Sabah Arar/AFP via Getty Images

Iraqi Prime Minister Mustafa al-Kadhimi issued instructions July 30 to reopen the Iraqi National Museum after the recovery of 17,000 looted artifacts from the United States. The Iraqi Ministry of Foreign Affairs announced Aug. 3 that Iraq had received the Assyrian "Gilgamesh Dream Tablet" and other artifacts from other countries.

Thousands of antiquities were looted from Iraq after the US invasion of 2003, either by smugglers, or at the hands of the Islamic State, which controlled a third of Iraqi territory between 2014 and 2017.

The deserts of Iraq are home to thousands of neglected archaeological sites. Citizens find archaeological pieces in the wild by coincidence, which encourages illegal excavations.

Ministry of Culture spokesman Ahmed al-Alawi told Al-Monitor, “The recovery of this huge number of artifacts accelerated the reopening of the closed National Museum. The Ministry of Culture and the General Authority for Antiquities and Heritage are working to meet the requirements for the reopening. The museum was closed for maintenance because it is an ancient museum and suffered from unstable security conditions.”

He noted, “There are many halls dedicated to ancient Iraqi antiquities. We hope visitors will enjoy these precious antiquities, as well as manuscripts dating back thousands of years.”

Alawi added, “The reopening of the museum would enhance knowledge about Iraq’s history. Visitors will get to experience firsthand the ancient cultures embodied in the artifacts. Today, the appropriate conditions allowed the reopening of the museum. But its management still has to provide financing. We hope that in the near future with the provision of financial budget allocations and the encouragement and guidance of the prime minister to announce the opening date. We want journalists to visit this great edifice and communicate with the visitors and the museum management.”

Abbas Abed Mandeel, deputy director general of the Department of Public Museums, told Al-Monitor, “The return of the artifacts is a historical event. This is the first time that 17,000 antiquities have been recovered at once. The collection includes different types of tangible heritage, including documents, daily and legal records, as well as literary, economic and mathematical texts, and epics.”

In turn, Hussein Falih, director of the Department of Antiquities in Babil, told Al-Monitor, “More than 3,000 antiquities were in the possession of the US Hobby Lobby chain of arts and crafts stores. The rest of the 17,000 pieces were returned from US universities. Iraq managed to do this in cooperation with the US State Department and the US Department of Homeland Security. The artifacts will be classified, documented and entered into laboratories, according to the department’s plan, and then they will be displayed in museums.”

On the history of the recovered artifacts, Mandeel said, “The recovered artifacts date back to different eras of history. The inventory and documentation will reveal accurate details about their content; the boxes have not been opened yet. The artifacts likely include the Gilgamesh piece, which is one of the 12 tablets of the Gilgamesh epic. There are many copies of that epic in cuneiform script. They sit in libraries and archives of Mesopotamia, including the Library of Ashurbanipal. We are still waiting to receive this tablet.”

He noted, “The Iraqi Museum has been closed several times, as a result of security events and political circumstances, since the end of 2019. The coronavirus pandemic also caused it to shut its doors. It was also closed in some cases for the purposes of restoring some halls such as the Sumerian Hall.”

Mandeel added, "The exhibition halls are overcrowded with thousands of pieces, which reflects the need for a project to build a large museum to accommodate the huge numbers. More antiquities continue to flow into the museum, whether through archaeological excavations or pieces returned to Iraq from abroad. The intention is to choose a new building for the Iraqi Museum that will bear the name of the Great Iraq Museum. A distinguished location in the Baghdad area — next to Karkh district — was chosen where all the conditions are met as per the museum-related standards approved at the international level.”

On Nov. 18, 2020, Minister of Culture Hassan Nazim had admitted that the issue of looted and stolen antiquities is a difficult one, involving parties from inside Iraq that benefit from smuggling, as well as regional and international countries.

Amer Abdul Razzaq, director of the archaeology department of Dhi Qar province, praised the largest return of Iraqi antiquities to their original homeland from the United States, especially since 90% of the smuggling of antiquities took place after 2003.

He told Al-Monitor, “This achievement is one of the outcomes of Kadhimi’s visit to Washington, accompanied by the Iraqi minister of culture, Hassan Nazim. It is also the outcome of the efforts of the Iraqi Department of Antiquities and represents an important initiative by the United States.”

Abdul Razzaq hopes that the return of antiquities would culminate in a giant Iraqi Museum, which is worthy of a country with more than 20,000 archaeological sites. “The Ministry of Culture obtained the necessary approvals for the construction of this giant edifice, which is expected to match international museums and attract millions of tourists annually."

The Ministry of Culture acknowledged Feb. 9 the difficulty of protecting all archaeological sites. This process requires dedicating a large number of security forces. The phenomenon of smuggling of artifacts will only be contained by raising awareness among community members on the need to preserve the symbols of civilization. This will also be possible by providing job opportunities for young people to keep them from slipping into the temptations of smugglers’ networks.