The Iraqi National Museum in Baghdad regains its cultural and tourist role and reopens with new exhibition halls displaying several artifacts that have not been exhibited before. 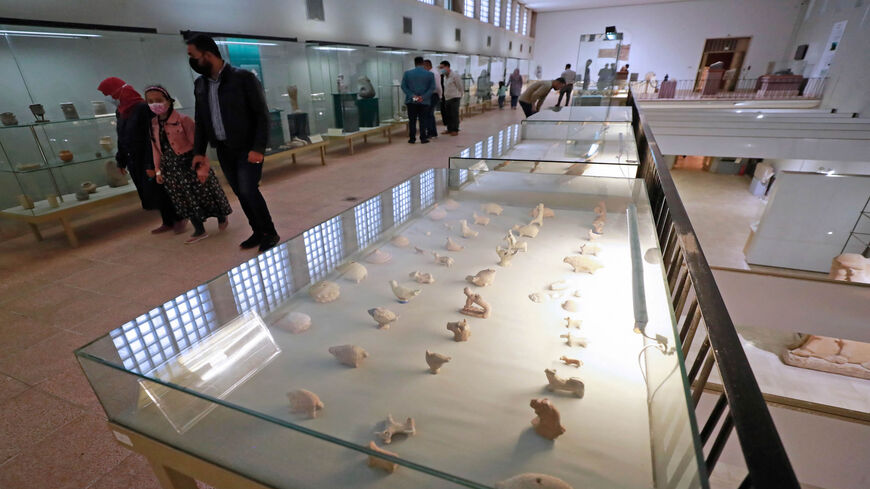 Visitors tour Iraq's National Museum, as it reopens after a three-year closure due to political unrest and the coronavirus pandemic, Baghdad, Iraq, March 8, 2022. - Ahmad al-Rubaye/AFP via Getty Images

Iraqi Prime Minister Mustafa al-Kadhimi inaugurated March 6 the National Museum, which has been rehabilitated and its halls restored, prompting many local and foreign visitors to visit.

The museum located in the heart of Baghdad was established in 1926 in al-Qashla area and moved to al-Alawi in 1966.

It was closed in 2019 for reconstruction work and remained closed during the coronavirus pandemic.

Ahmed al-Alyawi, spokesman of the Iraqi Ministry of Culture, Tourism and Antiquities, told Al-Monitor, “The Iraqi National Museum ranks fifth in the world in terms of significant exhibits and valuable historical artifacts, as well as manuscripts dating back thousands of years.”

He said, “The Presidency of the General Authority for Antiquities and Heritage of the Ministry of Culture, Tourism and Antiquities has been working for quite some time to reopen the museum, which had to close its doors due to the security developments in the country, the coronavirus pandemic and the need to have some parts of the building restored in order to accommodate visitors from Iraq and abroad."

Alyawi noted, “The authority has been working to meet the requirement in cooperation with other relevant authorities, with the support of Kadhimi, who recommended that the museum reopens its doors after Iraq had retrieved archaeological pieces belonging to it from the United States and other countries, which culminated in the recovery of some 17,338 artifacts, including the Gilgamesh tablet and the Sumerian ram.”

He spoke about “a positive turnout after the reopening,” and explained that the “museum began receiving hundreds of universities, institutes and schools, which are its primary target audience, in a bid to introduce the young generation to Iraq’s exquisite history and archaeology. Every day foreign visitors arrive at the museum as well.”

Alyawi added, “This achievement strengthens Iraq’s archaeological cultural richness and promotes the sense of belonging to the homeland. The museum is a gate to significant cultural, historical and archaeological assets, sending a clear message of [the importance of] culture to the world."

Despite the achieved improvements, Alyawi believes that there is more room for enhancement. “The museum still cannot accommodate the increasing number of antiquities with fewer exhibition spaces,” he said.

He noted, “Efforts are being made to build a new national museum after acquiring land. There are also efforts aimed at securing the necessary allocation to carry out this most significant strategic cultural project in cooperation with the government, and in conjunction with the recovery of thousands of smuggled artifacts.”

Kadhimi’s visit to Washington on July 30, 2021, resulted in retrieving thousands of smuggled artifacts, which prompted the premier to announce the reopening of the Iraqi National Museum.

Christopher Woods, director of the Oriental Institute at the University of Chicago, said in the wake of his visit to Baghdad in 2019 that the Iraqi museum houses collections that are unparalleled anywhere else in the world, especially those related to the ancient history of Mesopotamia.

Hakim al-Shammari, media spokesman for the Antiquities and Heritage Authority at the Ministry of Culture, told Al-Monitor, “The museum opened its doors to the public with 23 halls representing different eras and civilizations, from the prehistoric era to the Sumerian, Akkadian, Babylonian, all the way to the Assyrian, and ivory eras.”

He said, “There are also urban and numismatic halls and Islamic halls exhibiting 9,000 pieces, including a large tablet and other items such as cabinets."

Shammari noted, “The reconstruction process is ongoing, including the setup of lighting techniques, color and display methods. Meanwhile, restoration works in the Sumerian Hall have started, in cooperation with the United Nations and an Italian team to help decorate the central hall of the museum."

He said, “A new hall — the Coral Hall — was also added, in addition to equipping the museum with another hall for visitors, services and a cafetaria.”

He added, “The museum will display about 9,727 pieces. The General Authority — through its media office — is preparing to hold various cultural events according to a specific schedule, in cooperation with the Museums Department.”

Amer Abdel Razzaq, Dhi Qar antiquities and heritage inspector, told Al-Monitor, “The opening of the museum is not a praise for a government institution that displays antiquities. It is rather a revival of Iraq’s historical identity and a civilized achievement that would attract Iraqis and tourists alike.”

Junaid Amer Hamid, archaeological researcher who previously worked at the National Museum, told Al-Monitor, “The inauguration occurred when the antiquities were returned from the United States — notably the Hobby Lobby — the Museum of the Bible and others from the Netherlands, Japan and Lebanon. Iraq witnessed the largest recovery of artifacts in the past years, which is the result of cooperation between the General Authority and the relevant governmental and international bodies.”

The museum that was looted in the aftermath of the American invasion of Iraq in 2003 appears to regain its political and cultural role following the recovery of the smuggled pieces.

However, Hussein Falih, former director of the Department of Antiquities in Babil, told Al-Monitor, "The museum's current buildings and locations can no longer accommodate the increase in the number of antiquities, which is why efforts are pushing for a new building to be built in a privileged location in Baghdad."