The Virtual Museum of Iraq, which has been a work in progress since 2005, aims to bring Iraqi heritage and archaeological artifacts online by the end of 2018. 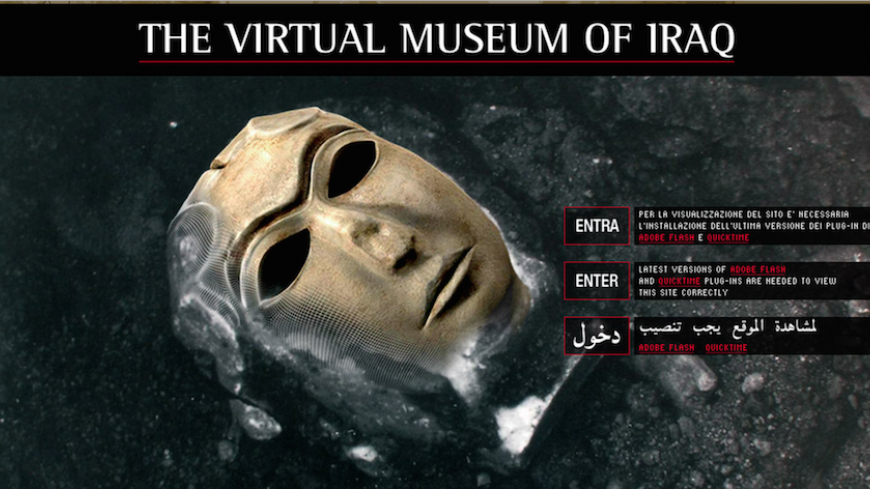 BAGHDAD — Iraq’s Ministry of Tourism and Antiquities has accelerated its efforts to finish by the end of 2018 the Virtual Museum of Iraq, which will create a comprehensive database of Iraqi archaeological heritage online.

“The project, which will establish a comprehensive database of Iraq’s cultural and heritage treasures, will make the Iraqi antiquities accessible to people all around the world,” said Abdel Amir al-Hamadani, an Iraqi archaeologist who is a candidate for management of the National Museum of Iraq.

The acceleration of the project comes following a Japanese government loan to Iraq a year ago. The funding was used to purchase equipment that would enable the online categorization of Iraq’s numerous archaeological relics, giving a breath of life to the virtual museum project that has been on the table since 2005. Most experts, however, maintain that further funding would be required to make it a truly stellar virtual museum.

At present, the Virtual Museum of Iraq's website is in English, Arabic and Italian and offers a flash video that takes visitors to eight different doors that correspond to periods of Iraq’s history: Prehistoric, Sumerian, Akkadian and Neo-Sumerian, Babylonian, Assyrian, Achaemenid and Seleucid, Parthian and Sasanian, and Islamic. If the visitor clicks on any of the objects in the halls, it zooms closer and allows you to observe the object closer, as if you were in a real museum.

Many of the relics in the website come from the National Museum of Iraq, which was closed in 2003 when US forces invaded Iraq and then officially reopened in 2015. The museum includes many exhibition halls, classified by historical periods, just like its online version, and displays many Assyrian monuments and cuneiform writings.

Junaid Amer Hamid, an archaeologist at the Iraqi National Museum, told Al-Monitor that the virtual national museum project started in 2005 through cooperation with American and Italian efforts, but had been “slow in its beginning because of the lack of funding, as well as security and political conditions in Iraq.”

He predicted that the “next two years will witness the completion of the virtual museum, which will by then include most of Iraq’s relics and artifacts.”

Hamadani, whose archaeological work is acknowledged on the website, said that despite all the financial and technological difficulties, considerable progress was made on the virtual museum. “The first step was to translate texts into Arabic and edit the texts," he said. "I was personally involved in the translation process and the publishing of information in Arabic, English and Italian. Indeed, relics from the 23 halls of the Iraqi museum were put up online, divided according to chronological historical ages, from prehistoric times until the end of the Islamic era.”

But financial difficulties stopped further work, said Hamadani. The Japanese grant was then used to overcome the financial bottleneck.

“The Japanese grant includes cameras, computers and other devices that will be used to document and digitally record Iraqi antiquities,” said Tanheen Ali Al-Miyadi, an information officer at the Iraqi National Museum. “Iraqi cultural heritage will gradually be transferred online to a virtual museum comparable to international practices.”

However, the process of documenting the existing items and tracking the lost ones continues to be both difficult and time-consuming. Some of the existing images of the antique treasures do not meet the quality standards of virtual museums. Hamid, an archaeologist at the National Museum of Iraq, said, “Iraq’s relics, including the ones in the National Museum, do not have high-standard virtual images. What is displayed online lacks in technology of effects and three dimensions and animated imagery. If these could be improved, it could lead to more interactions with the visitor.”

Also, some of the pieces were looted during the American invasion in 2003 and in the region's ensuing wars, and it would be difficult, if not impossible, to produce accurate digital images.

“The destruction of Iraqi heritage in Ninevah was a painful experience, not only for Iraq but for the whole world,” Miyadi said, adding that the antiquities housed there were not well documented and it would take a lot of time and effort to recover such information.

But she also maintained that the Japanese grant by itself will not be enough to document all Iraq's archaeological artifacts. "This requires concerted local and international efforts to support a virtual museum of Iraq’s relics, which will have the same standards as world-famous virtual museums,” she said.

The efforts exerted by the Ministry of Tourism and Antiquities at the international level resulted in the establishment of a fund for donors in Paris on May 17, whose budget amounted to $100 million to support the rehabilitation and preservation of Iraqi heritage.

Ali Sharif, head of the parliamentary Committee on Tourism and Antiquities, told Al-Monitor, “Iraq is in dire need of a virtual museum that includes a comprehensive electronic database of all the antiquities and relics in of Iraq.”

He expressed hope that Iraq, with the help of the Arab League Educational, Cultural and Scientific Organization (ALECSO), would complete this virtual museum by 2018, after the development of the necessary academic and professional skills. “The establishment of a virtual museum will reduce the cost of setting up field exhibitions of Iraq’s antiquities in different countries, which [places a strain on] the Iraqi budget," he said.

Hamadani said that the financial grants and support from UNESCO and ALECSO would help set a finishing date for the completion of the virtual museum, provided that Iraqi staff is trained by specialized foreign experts.

The 2003 US invasion and the overthrow of Saddam Hussein in Iraq delivered a major blow to Iraq’s historical heritage. Many archaeological sites and museums were looted, and historic landmarks were later destroyed at the hands of extremist groups. The virtual museum is a timely development, bringing Iraq's heritage to global audiences at a time when interest is high. The Iraqi pavilion at the Venice Biennale has put many Iraqi antiquities on display outside Iraq for the first time, and it has become one of the most visited parts of the international exhibition.