The Palestinian Authority is heavily relying on Ottoman archives to prove ownership of thousands of dunams of lands claimed by Israel in the West Bank. 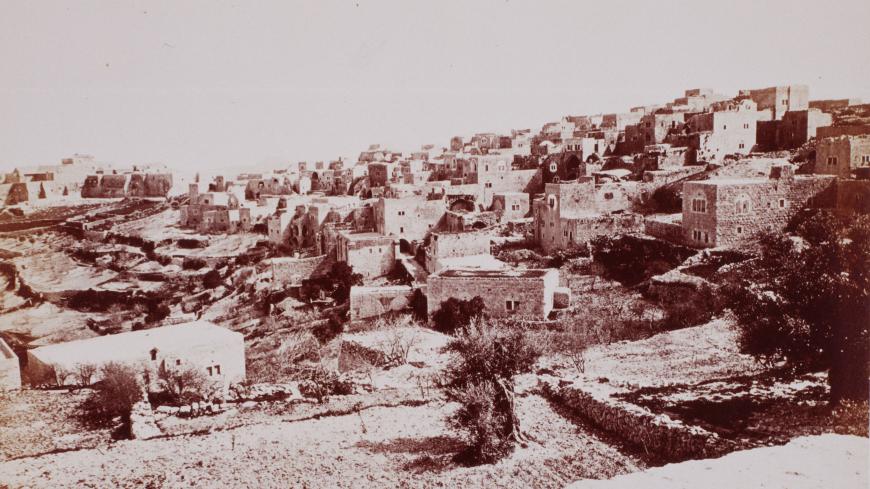 The city of Bethlehem, seen during the period of the Ottoman Empire, 1880. - Michael Maslan/Corbis/VCG via Getty Images

RAMALLAH, West Bank — Deeds 100 years old from the Ottoman archives are helping the Palestinians in their battle to prove their rights to lands around Jerusalem and the West Bank that have been confiscated by Israel.

Turkish officials had announced as early as 2015 that they were handing Ottoman documents to the Palestinians to help them claim ownership of properties taken over by Israel. Daily Sabah, a pro-government paper, quoted Kudret Bulbul, head of the Turks Abroad and Related Communities Directorate of the Prime Ministry between 2014-2016, as saying that the archives included “land registers, sultans' decrees and historical documents proving the property ownership of Palestinians in Jerusalem and the Palestinian territories.” In 2018, a full electronic archive of 140,000 documents was available, spanning over 400 years of Ottoman rule in Palestinian lands.

Israel Hayom newspaper published an article Jan. 2, titled “Erdogan’s Quiet Jihad,” reporting that Turks handed the Palestinians 140,000 microfilm pages from the Ottoman archives in an effort to extend their “influence-peddling in Jerusalem and on the Temple Mount.”

“The Palestinians see these documents as a game-changer in their battle with Israel over land. They have already used the archive to challenge Israeli ownership of land and real estate in various parts of the country,” the article noted, adding that the Turkish authorities delivered the microfilms to the Palestinian diplomatic mission in Ankara last year.

Lawyers affiliated to the Colonization and Wall Resistance Commission reclaimed hundreds of lands from Israel in 2019 with the help of those records, Walid Assaf, the commission’s director, said. The commission, affiliated with the PLO, provides legal aid to citizens who appear before Israeli courts to defend their lands.

Assaf said during a Jan. 5 press conference in Ramallah that the commission’s lawyers reclaimed 6,000 dunams (1,483 acres) in 2019. He also pointed out that another 40,000 dunams (9,884 acres) had been reclaimed since 2015 by proving that they were acquired through fraud.

According to Assaf, the Turkish authorities, specifically the Directorate of Ottoman Archives, handed copies of the archives on Palestine to the Palestinian Embassy in Turkey, which in turn delivered the documents to Methaq Center for Heritage and Islamic Research, which is affiliated with the Palestinian Ministry of Awqaf and Religious Affairs, in March 2018.

The ministry then shared the archive with the Palestinian Land Authority and the Colonization and Wall Resistance Commission. The archive includes maps, documents and real estate plans during the Ottoman rule of Palestine between 1516 and 1917.

The Ottoman archives on Palestine proved to be a huge advantage for the Palestinians, as it allows them access to many title deeds and properties that existed prior to the creation of the State of Israel, specifically in the area currently classified as Area C. This area, established under the 1995 Oslo II Accords, constitutes 60% of the West Bank. The agreement gives Israel judicial and security control over Area C, but the Palestinians maintain that Israel intends to annex and declare sovereignty over the whole area by displacing Palestinians and establishing Jewish settlements.

Head of the Palestinian Land Authority Musa Shakarna told Al-Monitor, “The existence of historical documents proving ownership of lands over 400 years of Ottoman rule of Palestine is significant. Israel expropriated most lands under the pretext they were state property. The documents are important to prove that Palestinians owned these lands hundreds of years before the establishment of Israel.”

The Palestinian Land and Water Settlement Commission, a public association that has financial and administrative independence and legal competence, also said it relies on Ottoman archives in its work. Its work is to provide land ownership, settle disputes between citizens and register land in the Palestinian Land Authority Registry.

Shakarna said, “We sometimes refer to the archive documents to verify land ownership” as part of the commission’s work that took off in 2016 to register all Palestinian territories.

Shakarna noted, “Ever since we started the project of land [Tapu] registration in 2016, we have settled the situation of 1 million dunams and registered them completely under the names of their owners in official records. Around 2 million dunams are also in the final stages of registration. The commission will finish registration of all West Bank territories by 2022.”

Encouraged by what they can find in archives in terms of land registry, Methaq Center for Heritage and Islamic Research is also working on receiving a new batch of historical Palestinian documents from some Arab states.

Khalil Karaja al-Rifai, director of Methaq, told the local Maan news agency Jan. 2 that the center is procuring new, important documents that will soon be revealed, in cooperation with the Arab League.

Assaf noted that the Ottoman archive will help the Palestinians challenge the Israeli interpretation and application of the 1921 Ottoman Mewat Land Ordinance related to deserted and remote lands. The law allowed people to restore these lands, provided they receive the government’s approval and restoration happens within three years at most. If the lands were not reclaimed during this duration, they were taken from the initial person and given to another. If the person restored the lands with governmental approval, he could register them under his name, provided he paid registration costs.

Assaf said that Israel activated the Ottoman law in the early 1980s and announced all lands that were not used during three consecutive years would become state territory. Consequently, it managed to control thousands of dunams. He added, “Thanks to these documents, we have restituted wide stretches of land, and we will recover thousands of additional dunams that Israel had previously declared state territory.”

He said that the archive is being used for two purposes: to solve internal disputes between citizens over land ownership and to reclaim Israeli-controlled lands in Israeli courts. “We used Ottoman archives to restitute lands in Jerusalem, Bethlehem and Salfit,” he said.

The PA might succeed in proving ownership of some territories with the Ottoman archives, but it might fail to reclaim important landmarks in Jerusalem and around Al-Aqsa Mosque. Israel is imposing its full sovereignty on the city and relying on the green light of the US administration, which declared Jerusalem the capital of Israel, and on annexing Area C in the West Bank to Israel.