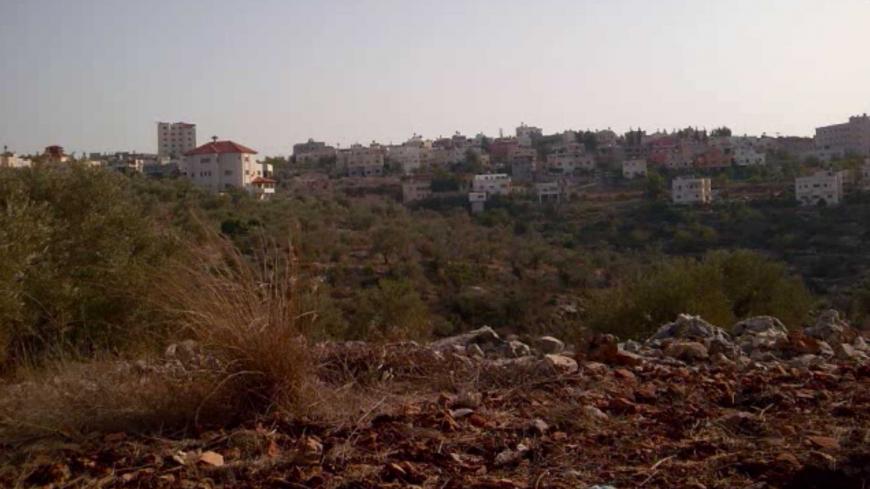 RAMALLAH, West Bank — The town of Biddya in the West Bank's Salfit governorate is building agricultural roads in mountainous areas to allow citizens to reach their newly reclaimed lands.

Construction began a few days after the landowners recovered over 190 dunams (over 47 acres) of land from Israeli company Yakir Investments, after lawyers from the Colonization and Wall Resistance Commission proved in mid-May the company forged the title deeds.

Youssef Abu Safya, a member of the National Land Defense Commission in Salfit, told Al-Monitor the case dates back to 1982 when Yakir Investments, with the help of some Palestinian brokers and tribal leaders, forged the title deeds of hundreds of dunams in the town in Area C. The landowners — who reside in the West Bank — started to pursue the case with Palestinian lawyers and rights’ groups, appearing before Israeli committees. When the Palestinian Authority (PA) was established in 1994, it took over the case and offered the complainants legal aid through the Colonization and Wall Resistance Commission, with which it is affiliated.

Abu Safya said lawyers Hussni Kalbona and Qusay Awad — both members of the commission — succeeded May 14 in getting a final decision from the Israeli Objections Committee, which is a military appeals committee based in the Israeli Ofer camp in the West Bank, to recover 74 dunams, and on May 16 to recover 116 more.

Kalbona told Al-Monitor the Israeli primary registration committees — responsible for land and real estate registration at the Civil Administration in the Beit El settlement in the West Bank — examined the cases and determined the Israeli company’s title deeds were forged. Yakir Investments appealed the decision in 2016 before the Objections Committee in the Ofer camp, but the committee rebuked the appeal.

Kalbona asserted that, by forging the land ownership documents, the Israeli company wanted to pave the way for building settlement outposts. He noted that the Objections Committee will look into several cases submitted around the same time.

Azmi Abu Hamde expressed the happiness of his family, which owns around 57 dunams of land in Biddya. He told Al-Monitor the land had belonged to his late grandfather, Mustafa Hamdan. In the next few days, the land will be divided among the heirs, who have vowed to cultivate the land quickly to preserve it.

This was not a first for Biddya’s citizens. The same committee issued a decision in January 2018 that the Israeli company had forged documents for around 218 dunams.

Walid Assaf, director of the resistance commission, told Al-Monitor the rulings are important achievements. In the past four years, that commission has recovered 800 dunams out of 1,300 in Biddya that Yakir Investments tried to control.

“We [the resistance commission] resort to fraud experts, fingerprint analysts, calligraphists and document experts to expose document forgery through which Israeli companies claim to buy land. In 95% of the cases we handle, forgery is exposed," Assaf said.

He added, “We deal with fingerprint analysts and calligraphists whose task is to analyze title deeds, postal stamps and signatures, among other details related to the periods of time that the documents date back to.” Assaf noted that the commission’s team exposed 19 forgery techniques that Israeli companies used, adding, “We have around 2,000 pending cases before Israeli courts related to thousands of dunams in the West Bank.”

The Colonization and Wall Resistance Commission plays a key role in following up on real estate and land cases, but it doesn't directly address Israeli courts and committees. Instead, it offers legal aid to citizens who appear before Israeli courts to defend their lands.

Ayed Marar, director of the resistance commission’s legal department, told Al-Monitor the commission is following up on all cases related to Palestinian real estate and land that Israeli companies are trying to buy or have supposedly bought.

Marar noted that, before the PA was established, citizens faced land usurpation alone. They bore the financial burdens in court to prove their right to their own lands. The commission has taken that load off citizens’ shoulders, he said, pointing out that citizens still must pay lawyers' fees, but the commission handles all other expenses. This has made it easier for citizens to defend their land and foil illegal sales and forgery deals.

Marar indicated that the commission in 2018 recovered 1,300 dunams and in 2016 30,000 dunams threatened with expropriation under military orders and real estate deals.

“Hundreds of cases we are handling date back dozens of years. Some deals were made in the 1980s, and the related cases are still in courts," he said.

The resistance commission relies on several techniques to expose fraud. “Land trades usually begin with oral contracts," Marar noted. "When a company wants to register them officially before the Israeli authorities, it becomes bound to announce the deal in the official gazette. This announcement constitutes an indication of the real estate deal and makes it possible for citizens to lodge complaints through the commission’s lawyer,” he said.

Marar added, “When we doubt that a deal was announced in the official gazette, we launch an investigation. We submit a demand to the Israeli Civil Administration in Beit El through lawyers after the concerned party delegates the task to us. We can then know if the purchase" took place legally.

He also said the commission relies on Palestinian security and intelligence information about oral contracts made by brokers before registration. If those are found, the land can then be saved before the deal is officially announced.

Although cases related to real estate might take 30 years to resolve in Israeli courts, Palestinians have no alternative for recovering their lands.