The residents of Qalqilya governorate in the West Bank are seeking to block construction of a water pipeline to supply Israeli settlements. 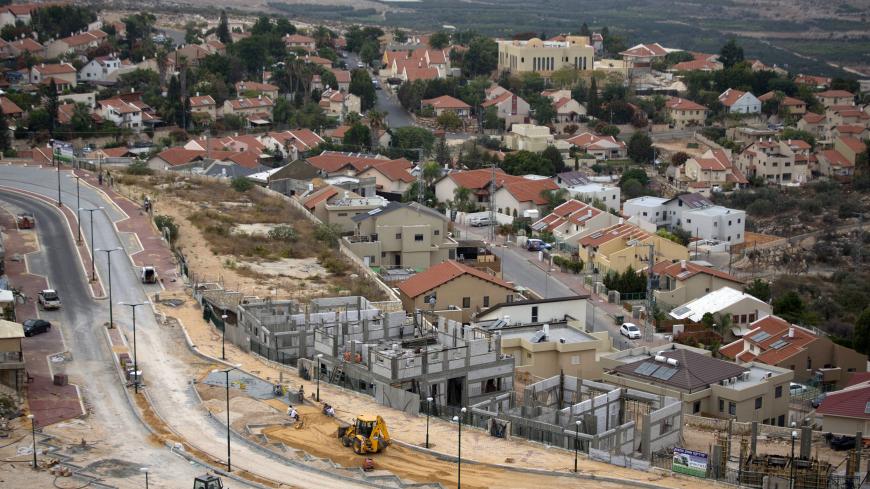 Laborers work on the expansion of the Jewish settlement of Tzufim, near the West Bank town of Qalqilya, Oct. 31, 2012. - MENAHEM KAHANA/AFP/Getty Images

GAZA CITY, Gaza Strip — Some Palestinians in the West Bank governorate of Qalqilya hope to stop construction of a water pipeline Israel plans to build that threatens to destroy agricultural areas there. The residents see the project as an Israeli ploy to uproot villagers and seize land.

On April 7, Qalqilya Gov. Rafi Rawajba briefed the UN Office of the High Commissioner for Human Rights about the hardships the area faces as a result of Israel's plan.

The pipeline is to be built by Israel's national water company, Mekorot Water Co. Ltd., which is the main Israeli company pumping and supplying water to all of Israel and its settlements. The pipeline will run from western to eastern Qalqilya to supply Israeli settlements in the central West Bank provinces of Qalqilya and Salfit. Qalqilya and much of Salfit lie in Area C of the West Bank, which is under Israeli civil and military control.

The pipeline project threatens the Palestinian presence in the area, according to Mohammed Abu al-Sheikh, the official in charge of the settlements portfolio in Qalqilya. Sheikh told Al-Monitor more than 700 olive trees are being cultivated in the area, alongside some 2,600 almond and carob trees. He accused Israel of attempting, by all possible means, to seize Palestinian land and jeopardize Palestinian existence.

Sheikh told Al-Monitor the decision to establish the pipeline was issued and approved in 2018, but the governorate was not informed of the plan until the end of March. The governorate held a meeting April 2 to discuss the implications of the pipeline.

According to the documents his office received, Sheikh said, the project will be implemented in several stages, with the first phase providing water to the Israeli settlements and outposts near the village of Kafr Laqif. He stressed that the pipeline, at 7.5 kilometers (4.7 miles) in length and 42 to 948 inches in diameter, will destroy the agricultural land it passes through, and Israel will confiscate an estimated 100 dunams (25 acres).

Officials also received a military report from the Israeli Civil Administration indicating that the pipeline will run from Azzun village in southern Qalqilya governorate and pass east through several villages in the Nablus governorate. Qalqilya also has received an aerial map of the plan including the numbers of plots and dams through which the line will pass.

Sheikh said the documents advise "that those affected by the plan should report to the Israeli Civil Administration … to receive financial compensation for the damage, which we reject."

According to Israeli law, Sheikh said, Palestinians have the right to file complaints with Israeli courts within 45 days from the date of notification.

“We held a meeting of municipal councils of the villages that will be affected by the pipeline plan. The council heads signed a petition against the project, which has been submitted to the Colonization and Wall Resistance Commission [CWRC] to be submitted to the relevant Israeli authorities," Sheikh said.

Ayed Marar, director general of the CWRC legal department, told Al-Monitor the real aim of the project isn't to provide Israeli settlements with water, but rather to confiscate Palestinian land. He explained that Israeli authorities could have established the pipeline along the bypass road created in 2018, but instead more agricultural land is being confiscated.

Like Sheikh, Marar expressed hope of stopping the project through the courts and popular resistance, and he called on residents to reject Israeli financial compensation for their land. “We are trying to salvage what we can from Israel's confiscation of Palestinian land,” he said.

According to Marar, landowners are identifying the damages the pipeline could inflict on them before they urge the Palestinian Water Authority (PWA) to submit a complaint to Israeli authorities. The PWA is a member of the Israeli-Palestinian Joint Water Committee, which requires that Israeli and Palestinian parties both approve of any project.

Sheikh said the pipeline will also restrict Palestinian movement and population expansion, as citizens will be forced to relocate or purchase lands in more remote areas. In addition, the villages of eastern Qalqilya, which number around nine and have a total population of 30,000, already suffer from a severe water crisis, he said. Residents currently get only about two-thirds of what they need and are forced to purchase water from Mekorot at exorbitant prices — around $1.50 per cup.

“We are unable to build a water line without Israeli approval, since its course would pass through Area C,” Sheikh said.

Mohammed Jaber is a resident of Kafr Laqif village, north of where the pipeline will pass through Qalqilya. He told Al-Monitor, “The line threatens income from the sale of oil and olives.”

In light of the local water shortages, especially with the approach of summer, Jaber said the settlements are enjoying water at the expense of Palestinians. Moreover, he said Israel is establishing water projects and building and expanding settlements and other infrastructure as a pretext for evicting Palestinians and seizing land.

“We will not accept the confiscation of our land, and we will confront the [pipeline] project by judicial means and popular resistance,” he stated.

In other recent projects, Israeli authorities in early March issued an order to confiscate about 15 dunams of land east of Azzun in Qalqilya, supposedly to widen roads, and in February, Israeli bulldozers also began razing hundreds of dunams of land in the villages of Siniriya and Masha to build new units for the nearby settlement of Etz Efraim.