Israel announced a project to build a water pipeline connecting two settlements in southern Nablus, which raises Palestinians' fears that a larger plan is in the works to divide the West Bank. 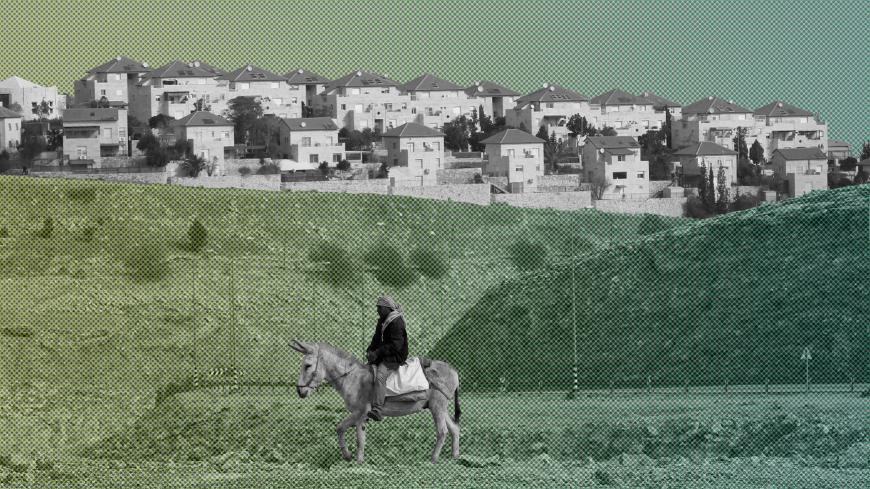 A Palestinian man rides a donkey near the Israeli settlement of Ma'ale Adumim in the occupied West Bank, Dec. 28, 2016. - REUTERS/Baz Ratner

GAZA CITY, Gaza Strip — Palestinian officials are warning that a water pipeline Israel plans to build across southwest Nablus will wreak havoc on Palestinian agricultural lands and is a scheme to form a large settlement bloc separating Nablus from Ramallah in the West Bank.

On Dec. 9, the Ministry of Foreign Affairs in Ramallah accused Israel of trying to impose a de facto situation, in case Israeli-Palestinian negotiations resume. The ministry said it is working with the concerned associations to prepare a case against the plan and raise the matter before international courts and organizations focusing on Israel’s settlement activity.

Officials further said they intend to expose the Israeli plan as an effort to undermine the Palestinians' dream of having their own state.

A day earlier, on Dec. 8, the Israeli authorities had issued an order to extend the water pipeline from the Shvut Rachel settlement to the Migdalim settlement. About 4 kilometers (2.5 miles) of the 7-kilometer pipeline runs through the West Bank villages of Qusra and Jalud in southern Nablus.

The pipeline would penetrate a large area of Palestinian territories, as well as seven basins in Jalud and three in Qusra. Israeli settlers in southern Nablus and their illegal outposts have been conducting dredging and road construction operations in nearby areas.

Daghlas noted that Shvut Rachel is 4 kilometers from Migdalim. All Palestinian lands through which the pipeline passes will be expropriated, but the lands have yet to be identified. He said this project has hidden motives, since the Migdalim settlement does not need to be supplied with water as it is at the entrance of Qusra, which overlooks the main street supplied with the necessary infrastructure.

He added that the ultimate aim of this project is to later build a large settlement complex in southern Nablus by connecting the settlements to outposts and taking over the Palestinian areas that are not occupied in order to build more outposts. “The citizens of Ihya outpost — which is built on Jalud territories — continue to plant trees on the northern side, while the settlers of Esh Kodesh outpost are dredging and building roads and new settlement units on the northern side of Jalud,” he said.

“The expansion coincides with the Israeli government’s decision to legitimize all settlement outposts in the area and to annex them to the new Amihai settlement [near Nablus]. Israel is looking to accommodate 1,100 families of settlers, and soon turn the settlement into a big city," Daghlas continued. "The Israeli government had already ratified a law to settle the situation of settlements in February 2016. The Ministerial Committee for Legislation also passed a new law Dec. 16 to build more settlements.”

Daghlas called on the international community to implement the UN resolutions condemning Israeli settlement activity on Palestinian territories. He said the Palestinian Authority (PA) is doing its best to halt the settlements.

Ayed Marar, director general of the legal department at the Colonization and Wall Resistance Commission, told Al-Monitor southern Nablus is one of the areas targeted for settlements, and Israel sees it as an extension of the Isbah Ariel settlement, a bloc aiming to cut ties with the West Bank.

Marar said that any settlement expansion needs infrastructure. Based on that, the water project is vital for any urban expansion and is key for the Israeli government’s settlement activity. He added, “Most water basins and underground wells in the West Bank are under total Israeli control, and Israel exploits more than 85% [of the water] to serve settlements.”

Just one outpost, he said, consumes as much water as seven Palestinian villages. He believes that extending water pipelines is not essential — rather, it aims to attract more settlers in the West Bank. He noted that his commission intends to submit its objection to the plan in Israeli courts, although he ruled out that the courts might accept the objection.

The 1967 Judea and Samaria Appeals Law No. 172 — which called for the formation of an Israeli appeals committee to examine disputes related to private properties — states that Palestinian property owners or legal residents have the right to ask for compensation from those in charge of a settlement project for any harm they might face during the specified time frame.

But the Palestinians have never resorted to this article of the law, as they consider settlements unacceptable.

Marar agreed that no Palestinian should accept compensation for the Israeli government’s expropriation of their land. He noted that compensation can be possible only after Israel stops its aggression and returns the lands. He noted that the PA must pursue Israel legally in international forums. Marar affirmed that he is banking on the popular resistance to foil this plan by playing peaceful, collective pressure cards.

Settlement affairs expert Khaled Mansour told Al-Monitor, “The wide lands of Jalud and Qusra and their low population pushed Israel to become greedier and seek to annex them to settlement outposts. These new outposts and the surrounding settlements would constitute a catastrophic settlement complex that would connect Ariel and Borkan complexes, reaching Israel.”

He added, “Building a new settlement outpost means building a line that splits the northern West Bank from its south and center, turning the Palestinian towns into islands in the settlement.”

Mansour argued that extending the pipeline would tighten Israel’s grip on the nearby Palestinian territories, under the pretext of protecting these water pipelines. He said the plan is a well-studied plot to increase the number of settlers in the area.

In addition, Israel already controls 85% of the West Bank's water resources and generally forbids Palestinians from digging wells. Even when it allows this, Israel determines the depth and pumping power, and even controls the hours of use. This has caused a devastating water crisis and a decline in the agricultural sector in the Nablus area.

“The Palestinians will not remain silent facing this settlement aggression,” Mansour said. “The PA must encourage their resilience, and the international community must force Israel to implement international agreements.”