The inhabitants of the Palestinian village of Qusra are regularly attacked by the Israeli settlers from nearby settlements, with the Israeli authorities doing little to help, reports Naela Khalil. 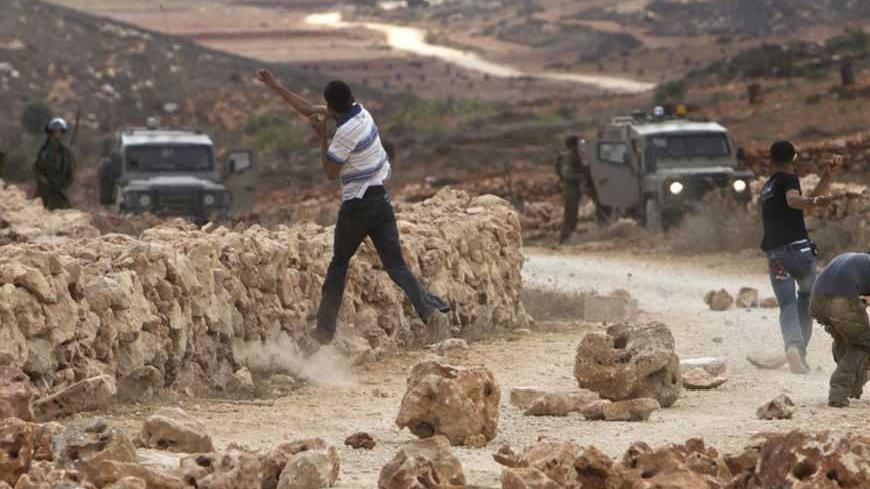 Hilmi Hassan lies in the intensive care unit of Hadassah Hospital, while Osama Rami has been transferred to the eye hospital in Jerusalem a few days after he was in Rafidia Hospital in Nablus. The two young boys are from the village of Qusra, south of Nablus, and were wounded by settlers who attacked Qusra’s villagers at the end of February 2013.

While the two young patients were in the hospitals in Israel and Jerusalem seeking advanced treatment for their critical wounds, their families’ homes were receiving dozens of villagers who came to console the families and check on the health of Hilmi and Osama.

One of Hilmi’s relatives said, “Qusra means family. We are all one family that rejoices together and suffers from the settlements together.”

Three settlements lie on Qusra’s land. The oldest settlement, Midgalim, is on Jabal al-Hafr, east of Qusra. The settlements Esh Kodesh, which was founded in 2000, and Keda, founded in 1997, are south-west of the village.

On that day, Feb. 23, Hilmi Hassan was wounded by an explosive bullet in his abdomen. Osama Rami, 15, was hit by a bullet in the eye. Thirteen others were injured and transferred to a hospital in Nablus. That was the 43rd attack on the village in three years, as documented by the Qusra village council.

Qusra’s people feel that no one hears them and no one cares about their suffering, according to Abdel Azim Wadi, the head of the village council.

Wadi is 40 years old while the rest of the village council heads south of Nablus are in their 50s and 60s. Wadi said, “The settlements are perched on the village’s chest from three directions, east, south and west. The most ruthless are Esh Kodesh and Keda. They attack the village late at night or at dawn. They burn mosques, shops and cars and cut down trees and kill livestock. If we confront them they fire at us.”

Esh Kodesh, or ‘holy fire’ in Hebrew, is inhabited by armed extremist settlers who regularly attack the village. The settlement’s reputation is associated with death, blood, and burning property.

Hilal Tawfik said, “As soon as we hear somebody calling for help from the village’s loudspeakers, we rush to help. All we can do is throw stones and shout at the settlers while the village council contacts the Israeli liaison to come over and fight the settlers, but they usually come hours after we contact them and they come with the Israeli army, which starts shooting at the people.”

His mother, Maysar Tawfik said, “When I hear a distress call from the mosque, I panic. I fear that the settlers will kill my husband or children who are rushing to aid the families whose homes were vandalized by the settlers. But I have no other option. I cannot tell my husband and children to stay in the house. I am afraid that if the settlers attack us the next day, no one from the village will come to help us.”

Wadi talks about the attacks against the village to foreign delegations that have come to show solidarity with the Palestinians and that visit the village from time to time. He said mockingly, “Throughout the years, that village has never been visited by any official from the Palestinian Authority, except at the end of February when the Minister of Local Government Khalid Qawasmi visited. That was the first time that the Palestinian government remembered our village.”

The village’s problems from the settlements and occupation are complex and costly, and require government support, but, according to Wadi, there are only promises.

The 7,000 people in the village suffer from regular electricity and water cuts by the occupation. The settlers cut down their trees and slaughter their livestock. Their daily life is at the mercy of the constant attacks.

Wadi said, “Most of the villagers make a living from agriculture and livestock. They sell livestock to pay for college. The olive harvest is enough to pay dowry for a bride and most of the wedding costs. But that is no longer the case. Settlers have been cutting down the trees and slaughtering sheep in the pasture when the farmer is absent. We count our losses every day.”

Water and electricity services are at the core of the daily suffering. In addition to attacks by settlers, Wadi asserts that “the Israeli army has carried out attacks contrary to the law and to the Oslo Accords, which they signed with the Palestinian side.”

On Feb. 23, Israeli army bulldozers destroyed the power grid that feeds the southern and western portions of the village. Five out of 33 electricity poles were destroyed, as well as cables feeding electricity to 60 houses.

Wadi said, “The electricity poles that were destroyed are in Area C, which is under full Israeli control according to the Oslo Accords. This means that, according to international law, public services are the responsibility of the ruling authority. But the Israeli army has destroyed the poles, even though it is an Israeli-Qatari company providing us with electricity! The electricity network was paid for by the villagers for a total cost of 65,000 shekels, or about $20,000.”

Even though there is an electricity grid, the power supply is very weak in the southern portion. Hilmi Hassan’s family, for example, cannot light more than three light bulbs in the house. “We light just one room. All the boys study in one room under one lamp, or we completely lose power.”

According to Wadi, the people of the village think that “the power grid was destroyed days after the villagers sued a settler after they found his identity card at the site where cars were burned.”

The same thing is happening with the water grid. The occupation authorities gave the village until April 16, 2013, to demolish the water system that they built without a permit, even though the project was funded by the German Representative Office in the Palestinian territories.

Wadi said, “If the water network is destroyed, hundreds of homes in the village and farms will be without clean drinking water. The settlement of Migdalim sits atop the village’s groundwater and deprives the villagers of that water.”

Not a day passes in Qusra without the settlements or the occupation making themselves felt. Perhaps in a few days, Hilmi and Osama will return to their families after being properly treated. But the next day, they will again be responding to distress calls against attacks by the settlers, who live no more than 500 meters away.