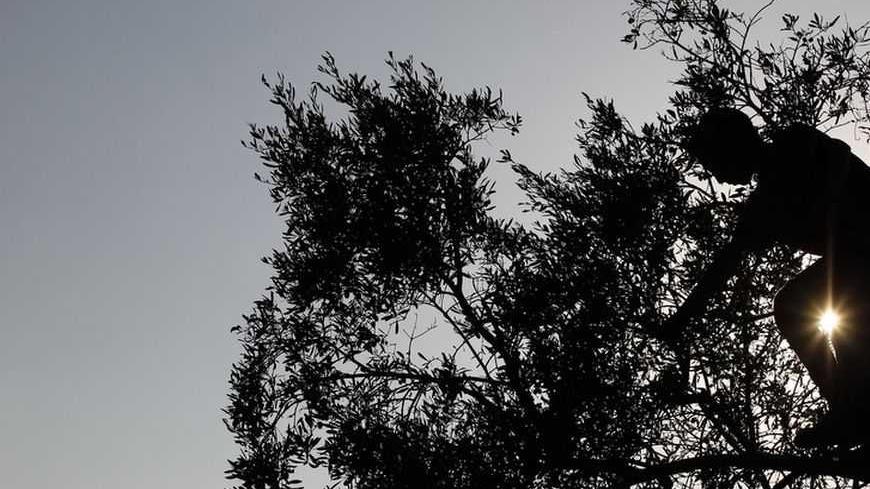 A Palestinian youth is silhouetted against the sun in an olive orchard during harvest season in West Bank village of Idna, near Hebron, Oct. 14, 2012. - Reuters/Ammar Awad

On the morning of Friday, Feb. 15, more than 200 Palestinian youths came from throughout the West Bank to gather in the center of Ramallah. They were not preparing for a national march or a demonstration at an Israeli checkpoint, as has been the practice during every similar gathering in the Palestinian territories.

They all stood with backpacks and tennis shoes, listened to the briefing about the journey, distance and number of Israeli checkpoints along the way, boarded the bus that was waiting for them, and headed to that day’s destination: al-Lubban al-Sharqiya village, south of Nablus.

The youth group, the idea for which was conceived four years ago, is called Tajwal Safar [arabic for Trip Travel]. They didn’t take their first trip, however, until mid-2011.

Samer Sharif, one of the group’s founders, said, “Our first trip, in which there were no more than 30 participants, was to Safa village in Ramallah.”

“On every new trip, Tajwal Safar attracts new members excited about the idea and experience. It is a non-partisan, non-governmental youth experience, and most importantly, it is not endorsed by donor countries, as is the case for the vast majority of Palestinian activities,” Sharif noted.

The idea of Tajwal Safar was born with a number of Palestinian youths who took part in the Arab Education Forum in Jordan, which was founded by the Palestinian intellectual Munir Fasheh. The forum’s activities include visits, during which Arab youths travel between Arab countries to spend a few days with an Arab innovator, before they write about their experiences. Sharif, Rayan, Mohammed Hamdan and others participated in such activities. They liked the idea and decided to adopt this vision and adapt it to Palestine.

The youth brought the idea to Palestine, and drew red lines that cannot be crossed in terms of not receiving any foreign aid. Thus, their financial support is limited to small amounts of money paid by participants, in contrast to the Arab Education Forum, which receives European and Arab support. Therefore, the link between the forum and the group is limited to their visions and ideas.

Regarding the group’s insistence on rejecting Western support, Sharif stated: “We had had enough of this support that had its own agenda and that does not identify us. Since the terms “funders” and “proposal” became a part of our Palestinian terminology, joint volunteer and youth work has regressed. What we all want is to develop our own space without any interference or guidance from anyone.”

The headquarters of Tajwal Safar in al-Bireh are somewhat austere and the furniture is old and mismatched, but every corner here vibrates with the spirit of the youth.

When they first rented the building for the headquarters two years ago, those in charge wrote to their Facebook friends: “We have a place to launch the activities of Tajwal Safar and all our activities. If you have a chair, a desk, kitchen utensils or additional pens at home … we are waiting for them. … Help us to furnish our own space.”

Since then, the headquarters have become a gathering place for all participants, where they meet after work and university hours. Instead of spending $5 for a cup of coffee in a cafe in Ramallah, each member will pay a dollar and make his own coffee in the kitchen. From that place, other youth groups emerged, such as Hakaya — which documents Palestinian oral stories and folktales — Bayt al-Hikma and Mish Cinema.

Rayan noted, “The rental fees and expenses are donated by youth participants or come from fees collected for the trips that are organized every two weeks. Previously these trips were organized only once every three months.”

There is a very good reason for this. In the past ten years the Israeli occupation has cut through the West Bank with more than 600 checkpoints, with the number of checkpoints fluctuating depending on the political situation. This has created a psychological distance between Palestinian towns and villages. For the residents of Nablus, visiting a European country is a lot easier than going to Hebron.

Sharif said: “The first visit was organized by our colleague, Hassan Karajeh, to his village of Safa in Ramallah. The idea was based on finding a host who coordinates a visit to his village or town, and organizes a meeting with the town elders. The elders tell us about the towns and recount folktales, and allow us to use the village facilities — such as bathrooms, as well as places to sit and sometimes to cook.”

Although Karajeh was detained two months ago as a result of his efforts to support prisoners on hunger strike, he maintains near daily contact with his colleagues in Tajwal Safar through online meetings or comments on social networking pages.

Rayan used to be constantly anxious about the possibility that Tajwal Safar would not last. He was concerned with participants getting bored, particularly since some tours cause physical fatigue, while others may lead to a confrontation with Israeli settlers. Yet, with a big smile on his face, he said: “My concerns were not real, since we completed a tour of the village of Battir in Bethlehem and walked for six hours, and nobody left. It was then I knew that Tajwal Safar would last, because participants showed a willingness and passion for what they are doing.”

Laughing, he recalled that a participant had said: “Every time I pay the fees for the trip and I get tired of walking on bumpy roads,  I say to myself this is the last tour. But once they advertise for the next trip, I will be the first to participate. … Going on trips has become a part of us.”

Sharif and Rayan, who graduated from the Department of Press and Media at Birzeit University last summer, stressed that Tajwal Safar presents a different Palestinian model.

Sharif said: “When we cleaned the protectorate of Ain Kana, cultivated legumes in Battir, harvested olive in the villages of Ramallah, and when we recently visited al-Lubban al-Sharqiya and cleaned the land owned by Abu Jamal — which is surrounded by settlers — we were not seeking popularity in the elections or support for a faction. Rather, we were challenging ourselves in order to know our potential and what we can provide.”

Sharif doesn't hide the fact that some are surprised by the assistance offered by Tajwal Safar, such as Abu Jamal. The latter is a farmer who was never visited by any government or non-government official for years, because his land is on the outskirts of the village and is subject to repeated attacks by settlers.

After dozens of youth harvested crops from the land and pruned the trees, Abu Jamal said with deep emotion: “There is nothing I want more than for the settlers to know that I am not by myself here.”

Sharif ended: “In the beginning, the goal of Tajwal Safar was to prompt each one of us to travel. Yet, with time, we discovered that we are strengthening the Palestinian [social] fabric, and building links between its different areas — which were destroyed by the occupation. We got to know beautiful places, but they are marginalized and do not have access to services. Every day, we make our own experience outside the box."