Although storytelling is normally reserved for the elderly, a young Palestinian man is reviving Palestinian heritage through folktales and organizing tours to archaeological sites. 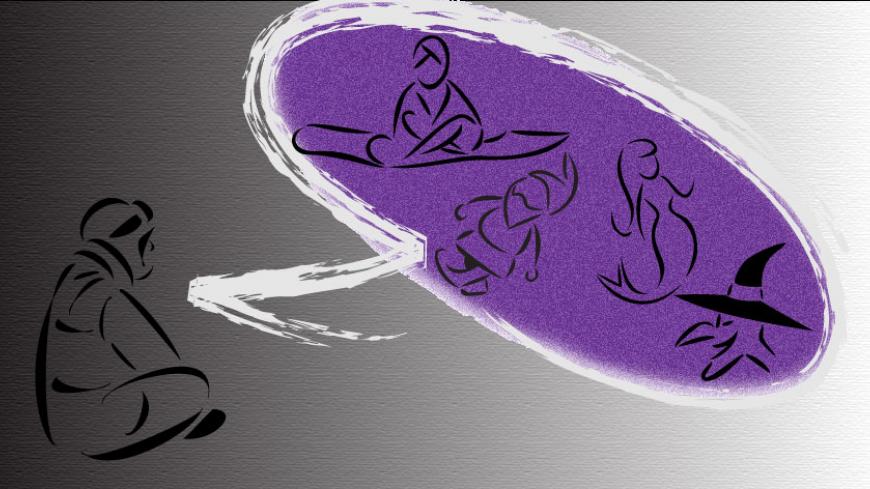 GAZA CITY, Gaza Strip — Stories and folktales are some of the oldest narrative forms in Arabic literature. There is no accurate history of their origin, but according to history studies this type of narration emerged in prehistoric times, when men communicated through signs and gestures, before acquiring a language.

Although storytelling is normally reserved for the elderly, Hamza Aqrabawi from the West Bank city of Nablus has turned his hobby into a full-time occupation.

Storytelling is a traditional practice that involves a person telling folktales in homes, shops, restaurants and in the streets. The storyteller impersonates his characters in the stories and keeps his audience hooked on knowing how the story unfolds.

Aqrabawi memorizes popular heritage stories, proverbs, jokes and folktales related to daily life in the Palestinian territories. He also works as a tour guide in Palestinian cities and villages, taking people on field trips that aim at “connecting the story to its place of occurrence.”

In 2006, Aqrabawi started documenting unwritten history through interviews with the elderly in his hometown of Aqraba in the south of Nablus and in the surrounding areas.

Aqrabawi told Al-Monitor, “I embarked on this path despite society’s ignorance of what I was doing. My friends were surprised and thought it was a waste of time. But, thank God, I overcame this phase. I am working on serving Palestinian heritage.”

He added, “I searched for stories and collected story books, conducted interviews, read books and historical references and immersed myself in the topics I was researching. I ended up having a series of stories that would stick in people’s memories.”

He has bought books from Arab countries, including Yemen, Lebanon, Morocco, Tunisia and Algeria. He now owns a library containing more than a thousand books and references in English and Arabic. He aspires to set up the first reference library in popular heritage in the Palestinian territories.

“The memory of people and land is my field of research, work and interest. I am willing to take any path that would serve my goals, including the studies and articles I publish, the guided tours and trips I organize, and the festivals and stories where I appear as a storyteller," he said.

Aqrabawi believes in the value of what he does, saying, “I am aware of the importance of these tours in creating a relationship between the Palestinian and his land. How can you love your country if you have not explored it? My stories revive the memory of the land and the individual.”

He recalled his exploration tour to the coastal city of Jaffa last year, where he saw Jaffa’s beach for the first time in his life. “The feeling I had at that moment still dwells in my soul," he said.

Aqrabawi, a volunteer youth activist in the village of Aqraba, pointed out that his first trip to an archaeological site in Aqraba was in 2009, accompanied by two youths from his village. He recalled how he took photos of the archaeological site and its surroundings, and collected and documented all the information he could find.

He explained that subsequently he started organizing tours for youth groups in his village and the neighboring villages, during which he started telling stories and folktales. These tours were the starting point of his storytelling and touring journeys.

Aqrabawi also participated in local Arab art evenings, festivals and theater performances, and took part along with 18 Palestinian folktale storytellers in the Tales of Land and Water festival, held in Qalqilya city in the northern West Bank on March 21.

Nisreen Samad, 22, admires Aqrabawi’s activities and told Al-Monitor, "It is nice of him to revive an old traditional habit.” She said that the idea of exploration ​​tours to touristic and archaeological sites in Palestinian towns is a practical step that strengthens a man’s relation to his own land.

“This could be beneficial to school and university students in the West Bank, as part of the cultural rituals aimed to promote the Palestinian sense of identity,” she said.

Meanwhile, Raed Hussein, 25, boasted that he had been part of the youth groups exploring Palestinian towns and villages and listened to Aqrabawi’s stories. He told Al-Monitor that these tours are usually formed of a group of young tourists and amateurs who roam the archaeological sites, accompanied by Aqrabawi who will talk to them about the history and importance of the sites and tell his own stories about them.

He said, “Hamza is an ambitious young man. He has wonderful storytelling skills and can capture the attention of his listeners. It is important that he nurtures his ambition to represent his homeland.”

Aqrabawi aspires to turn his exploration tours into a public cultural activity that allows Palestinians to recognize the value of their homeland, by maintaining a direct relationship with their land rather than through social media photos and posts.

He also seeks to organize storytelling festivals to bring stories back to the center of the learning process and to keep traditional stories alive by passing them on.

“I am proud to be a simple farmer hailing from a family of village farmers. My parents taught me to love my land and created in me a strong sense of belonging to my homeland. This was the greatest treasure I inherited from my father and mother,” Aqrabawi said.

Dozens of Palestinians — both women and men — are engaging in storytelling, and the Palestinian Ministry of Culture is organizing storytelling sessions and graduating many trainees. Folktales play a role worthy of praise in supporting Palestinian heritage.