Climbing and hiking tours in the West Bank not only have the potential to increase tourism, but also give Palestinian youth the chance to visit areas they have never seen before, thus strengthening their sense of belonging to the homeland. 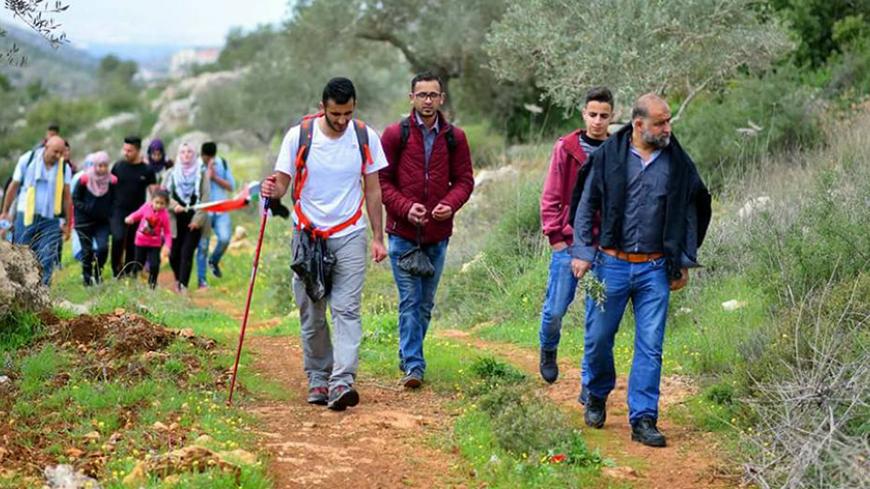 A group of walkers take part in a hike organized by the Palestine Association for Mountain Sports Development. Posted March 5, 2017. - Facebook/PalestineClubPAMSD

BETHLEHEM, West Bank — When Amro Halayka joined the Palestinian Association for Mountain Sports Development (PAMSD) three years ago, he was only planning to take up climbing for leisure. He had just graduated from the faculty of media and journalism at Hebron University, and enjoyed touring Hebron and visiting historic areas on his days off from working at a media office. Then climbing turned into an activity that took up more of his time; Halayka started going on hiking trips in Palestine and abroad, specifically in Europe.

In July, Halayka, 27, will go to France and participate in a training program for alpine mountaineering, in preparation of his attempt to achieve his dream of climbing Mont Blanc.

PAMSD, which was established in late 2013 by a group of people specialized in tourism and various mountain sports, organizes mountain sports activities, including hiking and climbing, across the West Bank. The association is registered with the Palestinian Ministry of Interior.

Halayka told Al-Monitor, “When I joined the association, I received practical training in organizing mountain hikes and I obtained an international permit from the French Alpine Clubs to spearhead groups and draw hiking trails at altitudes below 2,000 meters [6,600 feet].”

Halayka started training in Palestine before he traveled with the club to Savoie, France, and received his permit.

Halayka's training was divided into two stages. First, a French Alpine Club delegation visited the association and started the training on trails close to Bethlehem, and then the French Alpine Club welcomed the PAMSD members to France. The training involved leading groups, organizing walks, reading maps, drawing trails and using the GPS and compass, in addition to providing primary information about mountain climbing.

PAMSD, in partnership with the French Alpine Club, gave Halayka and dozens of other young men the opportunity to train in mountaineering. In fact, the association has fostered remarkable collective interest in mountain sports in the last three years.

Mohammad Farhat, the director at PAMSD, told Al-Monitor, “The association caters to the needs in our society. We do not know the geography of our country to begin with, so the association provides a chance to promote domestic tourism.”

He said, “Our motto is hiking to explore, own and live healthily. The aim is to turn hiking into a culture and an ownership experience among Palestinians.” Ownership connotes the spiritual ownership of land threatened with expropriation, amid the expansion of settlements. The association is based in Bethlehem, in the south of the West Bank, and surrounded by Israeli settlements on all sides, where stretches of land are threatened to be expropriated and annexed to these settlements.

Farhat added, “Palestinians do not know the geography of their country and its touristic areas. Palestine is rich in touristic, religious and commercial sites, and the association is trying to eliminate this geographical ignorance through its walking and hiking tours.”

Farhat noted that there is a high turnout for the weekly walks that the association organizes. People from all age groups and social and educational backgrounds show interest. Exact figures on the number of participants are not available, but according to Farhat, more than a hundred people participate on average in each tour.

The association also organizes hikes in exchange for a fee that does not usually exceed $20. During the trip, the hikers follow the guide who explains the history of the area. These hikes are open to anyone who wishes to join, and are not part of the club’s training program.

Not just mountaineering associations are organizing hiking tours. Other groups organize such activities, too, but have different goals, such as the Arab Education Forum, whose aim is education through hiking, and the media website Asdaa, whose aim is writing about the visited locations.

Halayka said, “The hikes are important because they offer participants the chance to connect with the land and develop a relationship with it. The tours also aim at encouraging change within the young generation and promoting a relationship with their country as well as boosting domestic tourism.”

Hamza al-Aqrabawi, an independent researcher in Palestinian history and archaeology, told Al-Monitor, “This sort of domestic tourism is no longer restricted to associations and large groups. Small groups are also taking tours, such as journalists who write about the places they visit and photographers who search for peculiar spots to capture with their camera lens.”

He added, “The most important part of such tours is the documentation process that follows, because it offers a large database of photos for social media purposes and the internet, and forms an archive that had been missing about these regions.” Participants of the PAMSD tours and other individual hiking activities share videos and photos of their hikes either on social media, or on their personal blogs.

Aqrabawi said that training people to lead hiking groups in general is important because the tour guide gives the participants the correct information about the places they are visiting. PAMSD does exactly that by offering professional training, while 90% of other independent tour organizers rely on their own knowledge they share with the hikers.

Hiking and organizing tours in general are important, according to Aqrabawi, as the visited regions are mostly located in Area C, which is under complete Israeli control, and where most natural landscapes abound. These tours have created a Palestinian culture and identity at a time when wandering through them was restricted to Israelis.

Aqrabawi, who also leads more than six hiking groups independently, concluded, “We are now competing with Israelis in these regions. We succeeded in creating a connection and spiritual link between the hikers and the land.”

Climbing and hiking activities that PAMSD organizes are accessible to hundreds of Palestinian youths who now have the chance to visit areas they have not been to before, thus strengthening their sense of belonging to these lands and their connection to them.