A walking trail across several villages in the West Bank aims to boost local and foreign tourism, in a bid to show the world that Palestinians have a rich cultural and archaeological heritage. 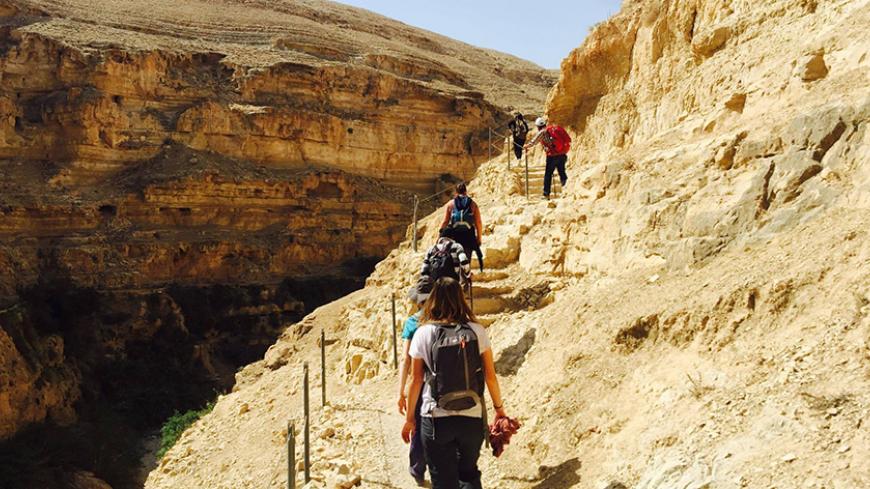 GAZA CITY, Gaza Strip — A group of Palestinians and foreign tourists departed April 19 on a 21-day hiking expedition to explore the history and sites of the West Bank. The trail they'll follow is called Masar Ibrahim al-Khalil (MIAK), which is Arabic for Abraham’s Path. The expedition aims to highlight the suffering of the Palestinian people on the one hand, and introduce foreign tourists to the Palestinian culture, heritage and history on the other.

MIAK kicked off in 2009 as a nonprofit community-based tourism initiative. The 321-kilometer (200-mile) walking trail begins in the village of Rummaneh, northwest of Jenin in the northern West Bank, and ends in Beit Marsam to the south of Hebron in the southern West Bank. The trail runs through 53 Palestinian villages and Bedouin communities.

Three nongovernmental organizations — Palestine Wildlife Society, Rozana Association and Siraj Center for Research and Studies — work on developing tourism in Palestine and protecting and preserving traditions and heritage, and are part of the MIAK initiative.

George Rishmawi, the executive director of MIAK, told Al-Monitor, “The purpose of this trip is to introduce local and foreign participants — with the help of 15 local tourist guides — to the historical presence of the Palestinians, and give them the opportunity to live with the villagers and experience different lifestyles and share food, discover agricultural fields and learn about the various types of plants and wild animals.”

He added, “This journey also aims to expose the suffering of the Palestinian people and the injustice caused by the settlements, the demolition [of Palestinian homes] and the displacement [of Palestinians] by the Israeli occupation forces.”

Folktales are a part of the event and traditional parties are organized by Palestinian dabke groups in the different villages, in addition to other activities such as cycling.

Rishmawi explained that this trail is open year-round for locals and tourists who wish to explore the West Bank; it is a permanent event that anyone can join. The entire trail is marked with signs, and guides provide logistical services to participants along the way.

The participants receive a symbolic passport from MIAK, which is stamped in each village they pass through. They are required to walk a certain distance each day, passing historical sites along the way.

On April 28, which marked the 10th day of the current journey, the participants hiked for eight hours into the city of Jericho, one of the oldest cities in the world and one of the lowest, nearly 800 feet below sea level. Participants learn about the life of the Bedouins and visit Wadi Qelt, which is the home to St. George Orthodox Monastery, a structure that appears to be hanging off the valley's slopes.

At night, the participants stay with Palestinian and Bedouin families and are introduced to the families’ origins and lifestyles, and eat traditional foods.

Zain al-Azhari, the coordinator of the trail along the northern West Bank cities of Jenin, Nablus and Ramallah, told Al-Monitor, “The idea of this event is to promote local tourism in Palestine, as well as advertising this trail internationally to encourage foreign tourists to visit Palestine and be part of this experience, in an attempt to revitalize the Palestinian economy through tourism.”

“They also see parts of the Israeli settlements built between these villages and villagers tell them about the violations they are being subjected to by the settlers,” Azhari noted.

Alaa Hamoz, a resident of Nablus who is taking part in this year's walking tour, told Al-Monitor that this is the first time he has gone on such an adventure, and that he has already learned a lot about the history of the Palestinian villages and the villagers and their lifestyles.

“What mostly struck me were the ancient ruins of the village of Duma, southeast of Nablus — such as Khirbet al-Rahiye and al-Rajam. Although I live in the city of Nablus, I had never heard about these ruins before in my life,” he said.

John Mark, a tourist from Berlin who came to the West Bank to learn about the life there, said he decided to participate in the MIAK tour as soon as he saw the event on Facebook, to gain additional information on the history, civilization and culture of the Palestinians.

Mark told Al-Monitor, “What has struck me most is that the locals never stop smiling and how welcoming they are. I feel the beauty of Palestine through the terrain, the valleys and the landscape. Everything is dazzling here.”

Speaking to Al-Monitor, Osama al-Zoghbi, a tourist guide accompanying the participants, said, “This journey is a great experience that encourages exploring and learning about the little-known facts of the West Bank villages.”

Zoghbi said his role as a tourist guide requires teaching the participants about the history, civilization, heritage and nature of the places they are passing through, pointing out that many of the monuments they are visiting date back to the Canaanite and Roman civilizations in Palestine.

Rishmawi calls on tourists from all over the world to visit Palestine and participate in this trail.