For the first time, Palestinians hold a digital tourism hackathon to develop innovative solutions to the problems facing the tourism industry. 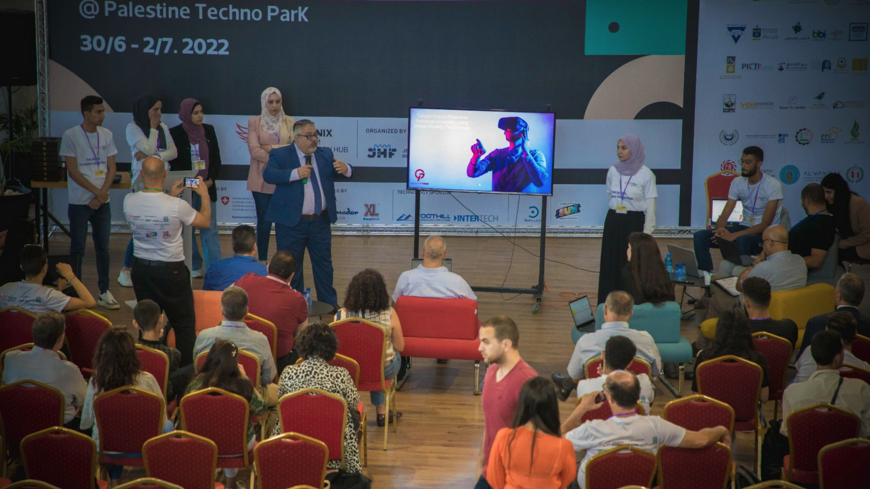 GAZA CITY, Gaza Strip — Before participating in the first Digital Tourism Hackathon in Palestine that ended July 2, Awad Hamad participated in around five technology incubators to market his digital tourism innovative project but had no luck finding a supportive, favorable environment.

The hackathon, the biggest technological event ever in Palestine, was held at Palestine Techno Park in Birzeit, north of Ramallah in the West Bank, with the aim of developing innovative solutions to the problems facing the Palestinian tourism sector.

Hamad and his team registered their ​​Astronomical Galaxy project, which consists of promoting astronomical tourism in Palestine through networking with tourism offices via a digital application that organizes astronomical trips to explore the sky and track stars.

The biggest surprise for Hamad was when his project won first prize out of more than 140 startup projects that qualified to participate in the Digital Tourism Hackathon.

“Our startup opens the way for a new type of tourism, which is astronomical tourism. We operate during nighttime when tourists are mostly resting. We focus on marginalized Palestinian areas that are vulnerable to Israeli expropriation to attempt to increase the number of tourists to preserve them,” Hamad told Al-Monitor.

Hamad is an astrophotographer and director and has always been interested in developing astronomical photography or astronomical trails as something new in the Palestinian areas. His project aims to document the existing astronomical components and environment so that tourists get the chance to explore the sky in nature.

“I was shocked when I learned that my project won. I could not believe it. I kept applauding as I headed to receive the award,” he said.

The hackathon brought together technology-savvy entrepreneurs, developers and designers specializing in tourism to submit projects, create teams and test startup ideas, with the aim of boosting the tourism and technology entrepreneurship community in Palestine and launching high-growth startups.

Hazem Khattab, head of the Jerusalem High-Tech Foundry, which aims to promote economic and social development through technological innovation, and one of the founders of the Phoenix tourism innovation hub — both of which helped organize the hackathon — told Al-Monitor, “The Palestinian tourism value chain faces several challenges and has been missing so many opportunities,” he said.

“The sector lacks geographical dispersion and has failed to leverage its national cultural heritage assets and tourist attractions across Palestine. This is not to mention the lack of digitization of the tourism value chain and up-to-date digital tourism information,” he added.

Hazem noted that the hackathon aims to explore tourism challenges and opportunities and innovate solutions and competitive startups. “We aim to provide new tourism offerings (products/services), including technology-based solutions through startups and new companies targeting local, regional and international markets,” he said.

Hazem indicated that the next step for his companies is to incubate the winners of the hackathon so that they can establish their startup companies, upgrade their products and invest and develop their ideas.

For Saleh Abbas, 25, who studied management information systems at An-Najah National University in Nablus, the Digital Tourism Hackathon was the golden opportunity that helped Palestinian youth develop their ideas and offered them capabilities in all areas to support their innovative ideas.

Abbas’ project (PalAR) won the second prize in the hackathon. It consists of designing and programming a digital game aimed at encouraging tourism in Palestine.

Saleh told Al-Monitor, “We will start by establishing a company for the project and then registering it with the Ministry of Economy to embark on a journey to attract investors and develop the project into a fully fledged company.”

In turn, Tony Khashram, former president of the Holy Land Incoming Tour Operators Association, argued that young people working in the digital field have high capabilities, but their skills and energies must be channeled in favor of tourism and put to use by tourism services providers.

Kharsham described the Digital Tourism Hackathon as a first step on the way toward the digitalization of the Palestinian tourism industry. “It will allow Palestinian youths who have innovative ideas and digital solutions that serve tourism to get pre-incubation support for their startups,” he told Al-Monitor.

He added, “The hackathon can improve digital tourism in Palestine. This, however, requires taking actual steps on the ground and addressing problems that may arise along the way.”