Will this mobile library drive Egyptian kids to read?

An Egyptian teacher has been roaming the villages of Egypt in his vehicle, distributing books and telling stories, in a bid to bridge the cultural gap between the villages and cities. 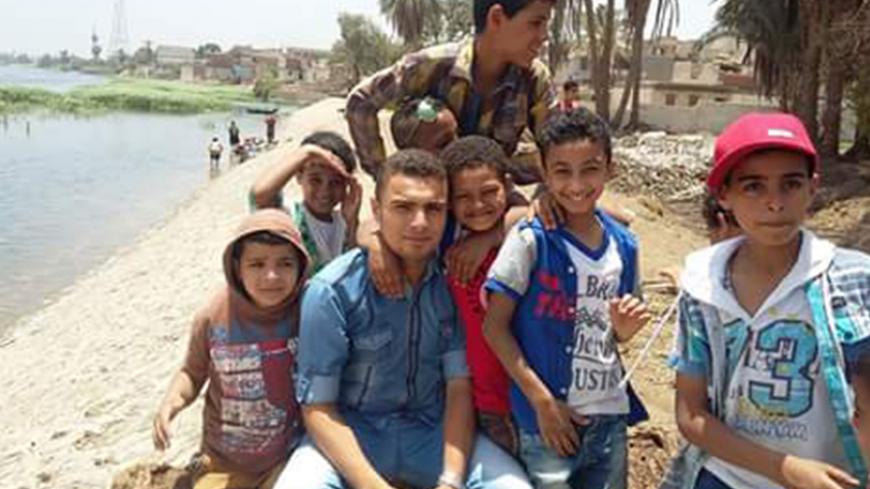 More than 50 children in the village of Arab Shams in the Sharqiyah governorate found out that Tales Ride, a bus that drives through Egypt to give free books to children, was going to visit their village on May 17. The children were excited about attending an interesting storytelling session run by the owner of the vehicle, English teacher Haitham al-Sayyed.

When that day came, Sayyed and a group of children between the ages of 5 and 12 escaped the hot sun and sat in the shade of a big tree along the edges of a field. The children sat in a circle listening to tales they had never heard before, but the highlight of their day was when each child got a storybook of their own, carefully selected by Sayyed according to the children's ages and interests.

The cultural gap between children living in villages and their counterparts in the cities prompted Sayyed to take his own vehicle and roam around the villages of his governorate, hoping to bridge that gap. Sayyed told Al-Monitor that since he was brought up in one of the villages in Faqous, in Sharqiyah governorate, he noticed that the knowledge areas that were available for him and his peers were far less than the ones available for children in big cities. He attributed this gap to the fact that cities have cultural centers while villages only have school libraries, which are rarely visited by children and only include books that date back dozens of years.

Sayyed noticed that the area where he lived included 20 villages with 40,000 residents and no public or private cultural center. Meanwhile, cultural centers in cities only organize events at night, which makes it impossible for children from the villages to attend in light of the long distances and the absence of transportation at night. According to Sayyed, this resulted in a decline in the children’s cultural knowledge.

An 8-year-old girl from Sayyed’s village inspired him to start the project. A couple of years ago, he was buying magazines for his daughter when a girl approached him and asked about the magazine he was holding. He was shocked that she did not know the magazine, and he immediately gave it to her. Two other children then approached him asking for magazines, and he promised he would get them some the next day.

At his own expense, Sayyed began collecting children's storybooks and magazines. By the first night of Ramadan 2015, he had collected around 1,000 books, which he distributed to children in his village. When children and their parents showed interest in his idea, it spread to surrounding villages, and Sayyed was encouraged to develop his project. Not only does he distribute books, he also reads stories to children.

The Tales Ride team consists of Sayyed and four other volunteers who started a Facebook page and used an illustration of children holding books in a vehicle as their logo. The team not only distributed books and held reading sessions, but it also organized several competitions to assess how much children were benefiting from the tales they read. The prizes included trips to archaeological sites in Egypt, organized at the team’s own expense.

Within a year, the team had visited 51 villages where they held storytelling workshops and distributed more than 11,000 books, which were collected by personal efforts and with the support of some libraries and publishing houses. Sayyed said that his audience was no longer limited to children; the workshops were attended by adults who were inspired by the idea.

Omar Ahmad, a library owner who supports Sayyed’s project, told Al-Monitor that as soon as he found out about the project and its purpose, he provided Sayyed and his team with different types of books, including children’s books and others that adults might prefer. He also noted that he offered a 90% discount for people who visited his library and made donations for the Tales Ride project.

“The joy children get out of a new book outweighs the one they get out of a used one,” Ahmad said, noting that children used to get old books, but he convinced Sayyed’s team to distribute new books so the children's joy is complete.

Sayyed tried to get books from the Ministry of Culture to support the project, but Culture Minister Hilmi al-Nimnim asked him to establish a formal institution to obtain this support, which Sayyed failed to do because his village has very few residents and several charities. It was difficult for him to provide a fixed headquarters and form a council for founding members, which needed at least 10 members in accordance with the Law of Civil Associations.

Sayyed tried to include his project under the management of the other charities in his hometown, but those in charge were not too excited about his idea — they mostly focus on helping the needy and have no room for cultural affairs.

Although the team failed to get the support of the Ministry of Culture, it was able to garner 100 books from the General Authority for Cultural Palaces and 300 books from the Cultural Development Fund. Sayyed noted that those cultural institutions have huge numbers of untapped books stored.

Neveen El-Kilany, the head of the Cultural Development Fund, expressed the fund’s readiness to support all cultural initiatives, whether they were official or individual, and told Al-Monitor that the fund was not only providing books, but it was also printing books that those in charge of such initiatives might need to achieve their goals.

“The fund will provide whatever the initiatives need, and our resources are at the people’s service,” Kilany said, noting that the fund will not only support Tales Ride by providing books, but it will also follow up on the project and answer to its future needs.

In addition to bridging the cultural gap between villages and cities and preserving the children’s cultural identity, Sayyed has another goal, which is to fight terrorism by spreading culture and knowledge among children. He also dreams of establishing a cultural center in his hometown that would include a theater, workshops, a lecture hall, a musical choir and a translation department. Sayyed said that this center will only cost the Ministry of Culture 2 million Egyptian pounds (about $225,000) out of the dozens of millions it spends on art festivals — which Sayyed sees as useless with low turnout.

“Knowledge is every child’s right to appreciate beauty,” concluded Sayyed. He expressed his willingness to cooperate with all institutions — governmental and nongovernmental organizations — to achieve his objectives. He hopes for Tales Ride to call at all of Egypt’s villages.