Children in Gaza rarely go to public libraries, a problem observers attribute to a combination of their academic schedules, the blockade and Palestinian society’s lack of emphasis on reading. 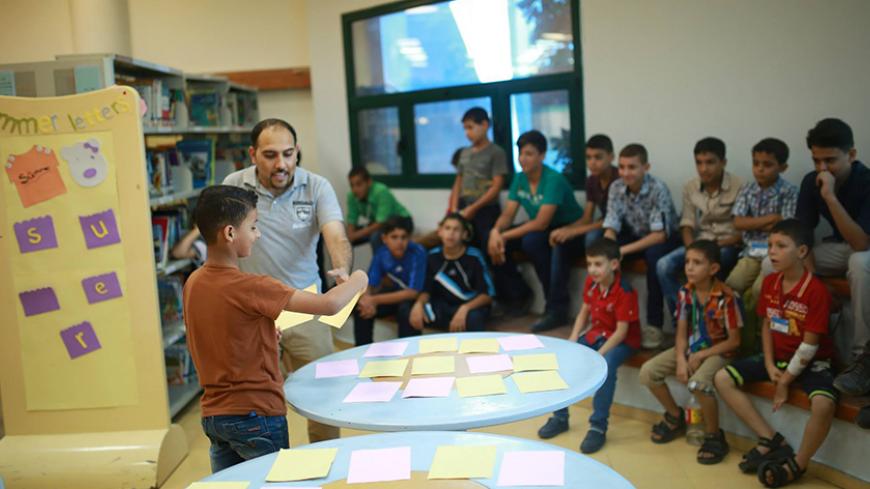 Children participate in a class at the Qattan library in Gaza City, July 30, 2015. - AM Qattan Foundation

AL-WAHDA, Gaza Strip — The Israeli blockade that has gripped the Gaza Strip for eight years now is a major obstacle to public libraries, preventing them from modernizing their bookshelves and displaying new products from international publishers.

Few people frequent libraries in Gaza when school is in session compared with the summer and winter vacations, since students are bound to a heavy curriculum and are preoccupied with exams and school duties. It should be noted that the Ministry of Education had tried on numerous occasions to modify the school curriculum and develop it in line with Palestinian students' situations and circumstances.

Al-Monitor visited some libraries and found them empty, with only a few children playing in the courtyards. Aseel Alian, 13, sat reading a story on one of the couches in the Qattan Center for the Child on al-Wahda Street in central Gaza City. She said she tries to balance her busy schedule between her studies and her reading hobby. She confirmed that her parents encourage her to read, pointing out that reading expands her intellect and develops her imagination.

Her friend Hiam Barghout, also 13, has been coming to the library for only a few months. She explained to Al-Monitor that she tries to visit the library from time to time to read novels that she likes and that are not available in her school library.

Hassan Abu Ataya is the director of the Public Library in the Municipality of Gaza, which allocates a special section for children's books. She told Al-Monitor that between 25 and 30 children visit the municipal library during the summer period, and this number drops to five children a week during the school year.

According to Abu Ataya, the children's heavy academic curriculum leaves limited time available for entertainment activities and reading outside the school environment. She said their parents are unaware of the importance of reading in their children's educational development.

Imad Nasrallah, director of the library and technical services unit at the Qattan Center for the Child, shares the same opinion. He asserted that book-borrowing drops during the school year because the prevailing culture believes the student’s interest must be concentrated on schoolbooks to achieve the highest academic scores.

Nasrallah told Al-Monitor, “The Israeli blockade is one of the library’s main problems. The library staff is subject to a travel ban and cannot attend book fairs held in the Arab countries to pick the best books and display them in the libraries. Despite the library’s attempts to overcome this problem by shipping books to the library’s headquarters in Ramallah and then into the Gaza Strip through the Erez crossing, this attempt is no longer feasible as it encounters numerous Israeli impediments."

Regarding the number of books available in the Qattan library — the largest children's library in Gaza with at about 3,000 square meters (32,000 square feet) — Nasrallah indicated that the library contains 100,000 copies of various books in all literary and scientific fields and that 50% of them are stories and novels that attract children. He said the annual lending rate is about 60%.

The general manager of exhibitions and libraries at the Ministry of Culture in Gaza, Mohammad al-Sharif, told Al-Monitor that the most important problem facing public libraries is the lack of proper advertisement and coordination with schools and departments of education, pointing out that a general reluctance to read is a problem in Palestinian society.

Nasrallah said the Qattan Center has seasonal activities and programs throughout the year. He said that two events held this autumn included several activities that encourage children to read, such as “Read and Play with Mom,” which is a joint reading activity with parents and children under six, and “Reading is Fun” to encourage reading stories, in addition to an e-books reading challenge.

Public libraries that are not specialized in children’s books are suffering from a lack of staff trained to work with this age group. As a result, many potentially beneficial activities, such as storytelling and cultural programs, are not being offered, according to Abu Ataya.

He clarified that libraries are seeking to extend their hours and to issue free memberships for students to encourage them to come in and borrow books. Membership fees in public libraries reach $2.50 per year, unlike the Qattan library, which is free for children ages 1-15, according to Abu Ataya.

Commenting on the Culture Ministry's treatment of the issue, Sharif said, “The lack of a budget allocated to children's books is a challenge impeding the encouragement of children to read.” He noted that the ministry relies on donations and grants from foreign and Arab publishing houses.

Sharif said that the ministry is currently preparing a plan to encourage reading among children. He recalled one project called “Reading Therapy,” which targeted primary and elementary school students in several public schools. The results were positive as students started reading more and found answers to their questions in books instead of asking their teachers.

According to Sharif, UNRWA-affiliated schools claim they are not organizing such activities because of the students’ tight schedules and preoccupation with studying. He also said that the ministry had suggested holding book exhibitions in schoolyards, a project that was immediately rejected.

Children’s public libraries constantly try to cooperate with the Ministry of Education by organizing field trips for children to introduce them to the library and encourage them to get a library card. They also try to engage school libraries, holding training sessions for librarians on working with children and encouraging them to visit libraries.