With the purchasing power of Gazans on the skids, people are reading less, and some libraries and book shops are barely scraping by and others are closing down. 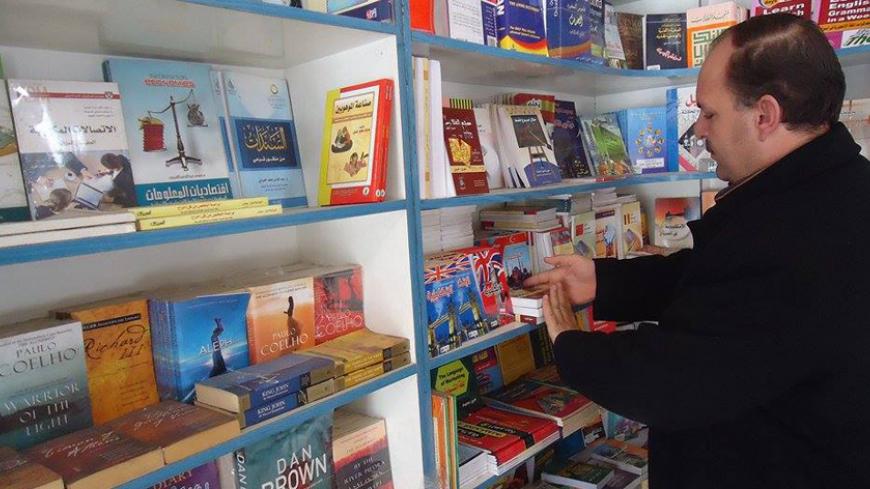 Hatem Yazigi, manager of the Yazigi bookstore, is pictured in his shop in the Shujaiyah neighborhood, east of Gaza City, April 14, 2015. - Mohammed Othman

GAZA CITY, Gaza Strip — Dust has covered the shelves that were once home to thousands of books in the Hashemite Library on Al-Jalaa Street in central Gaza City. Readers have stopped visiting the library, one of the oldest in the Gaza Strip. This library, which housed the work of hundreds of Palestinian and Arab writers and poets since its establishment in 1942, currently lacks visitors. The writers and the library eventually grew apart, and those who do visit only do so occasionally. The library’s owner and manager, Salama Abu Shaaban, reflects on the era when her establishment was frequented as a “sweet memory.”

The Hashemite Library remained a beacon of knowledge and a destination for readers and intellectuals until 2000, when the number of readers started to dwindle, given the tough economic situation in the Strip.

Abu Shaaban told Al-Monitor, “My father was the first to lend books in the Gaza Strip at a symbolic price. He encouraged reading, especially for kids, and he lent them books and gave them special prizes, a totally personal initiative. But this has changed. We no longer sell local and Egyptian magazines and papers delivered to us, and rarely does anyone pass by to buy a book.”

In the 1950s, the Hashemite Library was commissioned to sell newspapers and books from prominent Egyptian publishing and distribution houses. It was also a space for writers and intellectuals to meet. However, the Internet’s invasion and the poverty of Gaza Strip’s inhabitants have inhibited these activities.

“Due to the rise of the Internet and the economic stagnation, we no longer got books for distribution or sale. Some writers come to us to market and sell their books, but we fail to do that even with increased advertising,” he added.

The condition of the Hashemite Library is not very different from that of other libraries in the Gaza Strip. Shujaiyah's Al-Yazigi bookshop, one of the most luxurious in the city, echoes emptiness, as no one comes anymore to buy the books it sells by Palestinian, Arab and international writers.

University professor, poet and critic Abdul Fattah Abu Zaida believes that reading is important in the Gaza Strip. However, the economic situation has pushed Gazans to abandon books and libraries. He told Al-Monitor, "We notice a lack of interest in reading. There aren't many public libraries that encourage citizens to frequent them, either. What's more, writers don't have a financial incentive, as books are cheap and accessible. All this has affected reading."

Abu Zaida added that in the event the economic situation improves and financial incentives for writers and readers alike are made available through cultural, intellectual and literary competitions, the percentage of readers would increase. "This phenomenon is not a reading halt, but it is the consequence of circumstances that we hope are temporary and can be overcome," he said.

Its manager, Hatem al-Yazigi, noted that in 1974, the store traded in stationery, textbooks and office supplies. However, 10 years later, it turned to importing and printing cultural and university books as well as novels. Currently, the shop has around 15,000 books.

Yazigi, the owner’s son, told Al-Monitor, “After universities became widely spread in Gaza Strip, we thought that it was our duty to expand our work and import university and cultural books and reference books for teachers and students. Thanks to my father’s efforts, we traveled to Arab countries to obtain copyrights from several Arab publishing houses.”

Compared to the first three decades of the shop's life, book sales have decreased. Yazigi blamed this decline on several factors that shut its second branch in central Gaza down.

“Lately, the situation has grown worse, and we can say that there is little demand for books. Only some organizations support the reading culture and buying books. They mainly focus on children’s books, literature and novels. Meanwhile, our participation in book exhibitions abroad has been effective, because there is a high turnout by the inhabitants of the countries we visit,” he said.

Only university students and teachers, in addition to some intellectuals and poets, seem to be buying books. Although there are not many, they search for low-cost books. For that reason, many street vendors sell books in front of Gaza’s universities.

Imad Matar, a bookseller in front of Al-Azhar University and the Islamic University of Gaza, told Al-Monitor, “The prices of books range between 3 and 15 shekels [$0.75 to $4]. Still, not many people buy them.” 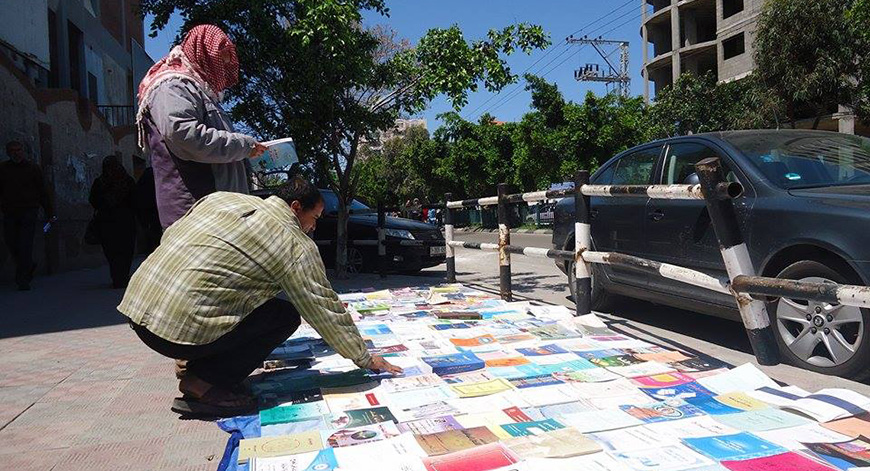 Bookseller Imad Matar sits on the sidewalk in front of Al-Azhar University and the Islamic University in Gaza City, April 14, 2015. (Photo by Mohammed Othman)

“Compared to bookshop prices, ours are lower, but book readers are rare. Four days might go by without us selling even one book,” he noted.

The decline in Gaza’s readers threatens the major libraries in the Gaza Strip, and their shutting down or limiting their role to selling schoolbooks threatens to affect the cultural scene.

On that note, the general manager of exhibitions and libraries at the Ministry of Culture in Gaza, Mohammad al-Sharif, noted that there are over 13 public libraries across the Gaza Strip, and around 10 active university libraries that cater to the needs of university students.

“Private libraries do not exceed 10, and they are owned by institutions. There are four main commercial libraries that import books from abroad and distribute them to library branches. The owners of these libraries participate in book exhibitions in Arab countries, import the newest books and distribute them inside the Gaza Strip,” Sharif said.

He noted that books continue to be widely available in the Gaza Strip. There are over a quarter of a million different books in all fields, distributed among public, private and university libraries.

Asked about the steps that the ministry is taking to spread a culture of reading among citizens, Sharif said that two international book exhibits were organized in 2011 and 2012. But the government’s financial situation is so poor that the division has been unable to put on another exhibition.

“We prepared a complete scheme to hold the exhibition, but the internal division has burdened us and prevented us from proceeding. Such an exhibition would need a large financial budget,” he said.

Author of children’s books and cultural activist Fathiya Sarsour believes that reading in the Gaza Strip has significantly declined in the past 10 years, although many people still give books as gifts that remain unwrapped.

She refers to this phenomenon as “reading illiteracy” in Gazan society, she told Al-Monitor. It's even infected intellectuals, who are trying to keep pace with the modern world through fast online reading.

“Reading has declined, and there is a desire for the fast alternative provided through the Internet. Some people even think it is enough to read the book synopsis, as if that will enrich them. They are not aware that a good reader can read between the lines what the summary might dismiss as wordiness,” she said.

She added that despite the support of some local and international institutions for a reading culture in Gaza, the Strip also needs artistic support and enrichment for libraries with various books that attract people from all walks of life, not only students.