Although writers and publishers have suffered in the economic difficulties that have gripped the Gaza Strip since 2006, signs of a literary awakening are giving booklovers hope. 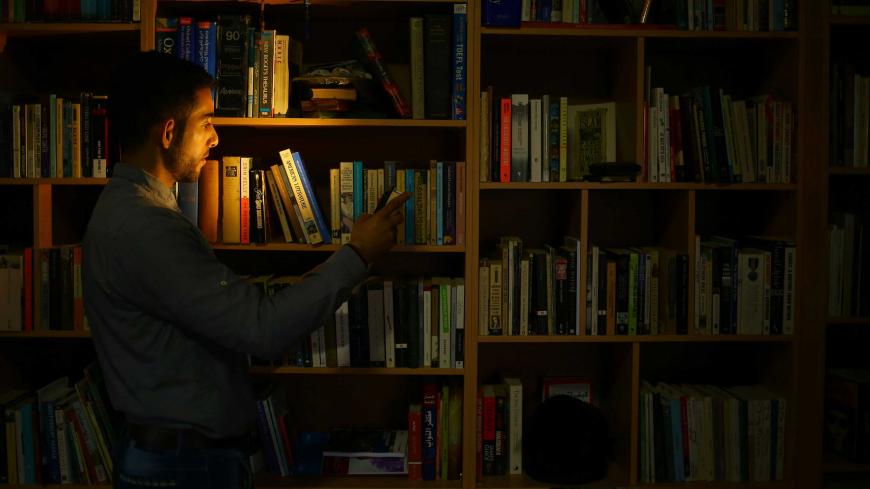 One of the sectors hit hard by Hamas’ rule over the Gaza Strip and the Israeli siege was book publishing, but both publishers and authors see signs of a literary awakening this year.

The political-economic conditions of the Strip in the last decade have led to a cultural stagnation, and few books are being published and fewer still are bought. But since the beginning of the year, publishers, authors and members of the Ministry of Culture have grown hopeful as more books have been published, more cultural events launched and more young people seem eager to read.

Samir Mansour, the owner of Samir Mansour Bookshop for Publishing and Distribution in Gaza, told Al-Monitor that although book sales in Gaza had been good before 2006, over the past 11 years, the economic difficulties caused by the Israeli siege meant that literature and cultural events became a luxury for Gazans.

“Each year, we participate in an annual book fair held at the Islamic University in Gaza City, as well as other book fairs in some schools. Due to the harsh economic conditions, book sales are weak. However, sales have started to improve slightly this year,” he said.

Several authors share a sense of improvement. Journalist and fiction writer Hidayah Shamoon celebrated the publication of her collection of 15 short stories on Nov. 12. She bore the publishing costs herself in October to get her book published, but she sees the experience as an improvement over the past decade, when very few new writers were published.

“After years of cultural deprivation, we finally started to experience a cultural movement in Gaza,” she told Al-Monitor. “There is a return to reading, to cultural meeting centers and forums … especially in the last few months. The turnout at the singing of my collection, ‘Daughter of the Sea,’ was impressive and outnumbered the available chairs allocated to a humble book signing.” Shamoon expected about a 120 people and 200 showed up — almost double the capacity of the hall.

Shamoon said that there is a hunger and passion for cultural activities in Gaza, and she expressed hop for more literary activities "to move us from isolation to cultural openness.”

Despite the local interest, the closure of the Rafah crossing makes international participation in Gaza’s book fairs difficult. On Sept. 4, the Ministry of Culture collaborated with local cultural institutions to organize a book fair. But the closure prevented international publishing houses from coming. Back in 2012, when the crossing was open, more than 70 Palestinian and Arab publishing houses attended the book fair held in Gaza City.

In September, young novelist Yousri al-Ghoul published his fifth book, “Gaza 87,” in which he narrates real-life stories of Gazans under the Israeli occupation during the first intifada, which erupted in 1987.

His publisher handled the printing expenses of some of his books, but some other costs were divided between the publishing house and the author. “I earned no money from these novels,” Ghoul said, adding that he only broke even.

According to Ghoul, although more books are getting published, there is still artistic progress to be made. “I was hoping that the works published would be stronger and more creative,” he said. He added that subsidies by the state bodies, such as the Ministry of Culture, will help more books to be published.

Self-help books have made it to print in Gaza this year, including Samir Mansour Library's “We Must Change,” a collection of articles by highly satirical writer Rasha Farhat.

"A good book with rich content always finds its way to the readership. The Samir Mansour house has granted a golden opportunity to young authors in Gaza as it respects copyrights and the rights of the publisher,” Farhat told Al-Monitor in a sad comment on the state of publishing in the region.

According to Farhat, the increase in youth and college students who buy books reflects a cultural movement “that was absent in the last 10 years.”

Mohammed al-Sharif, the director of the libraries and fairs department at the Gaza Ministry of Culture, told Al-Monitor that the harsh economic, political and social conditions in Gaza have prevented many people from reading. But Sharif has noticed an increase of regular literary events such as book clubs, indicating an increase in book reading among the population. “This year, we inaugurated three public libraries in cooperation with local institutions, which is a good thing. In the past, we opened only six public libraries in four years.”

He also said that more books are being published, which the ministry tracks. “In a count of the number of publications since 2011, we found that more than 700 book titles were published during that period, with 200 of them being published this year alone,” he said.

Ahmad Yazji, the owner of Yazji Bookshop Publishers in Gaza, told Al-Monitor that on Oct. 24, the store established a permanent children's book department called “Kids Books.” The section features more than 1,500 books and has sold more than 1,000 copies in the last two months, according to Yazji.

Yazji added, “This year, the publication of literary works increased compared to last year. In 2016, we published 20 titles, but this year, we published 30 new ones.” He added that several websites have started to sell books online.

Samir Mansour Bookshop's numbers are up, and the publishing house has produced more than 70 books this year, including novels, short story collections and children's books, Mansour told Al-Monitor.

The assistant secretary-general of the General Union for Palestinian Writers, Ghareeb Asqalani, told Al-Monitor that more young authors are seeking to get their novels or short stories printed. He said while some of those writers are still developing, it is important that they have a market.

Asqalani added, “[These new books] have attracted a huge readership among the young generation and drawn the attention of readers and academics. Still, the youth needs to be guided toward good writing. First novels are usually not very mature, but promising. In the union, we try to guide them, [but] we do not have the ability to support them financially due to the lack of budget.”

Asqalani explained that cultural activities such as book readings and fairs are ambitious endeavors in Gaza, and he called upon Palestinian cultural unions, nongovernmental organizations and official institutions to allocate spaces to support the writers.