A group of students, in partnership with Al Nayzak Organization, helped establish a library in Gaza, made up of recycled items and used books, to encourage reading among Palestinians. 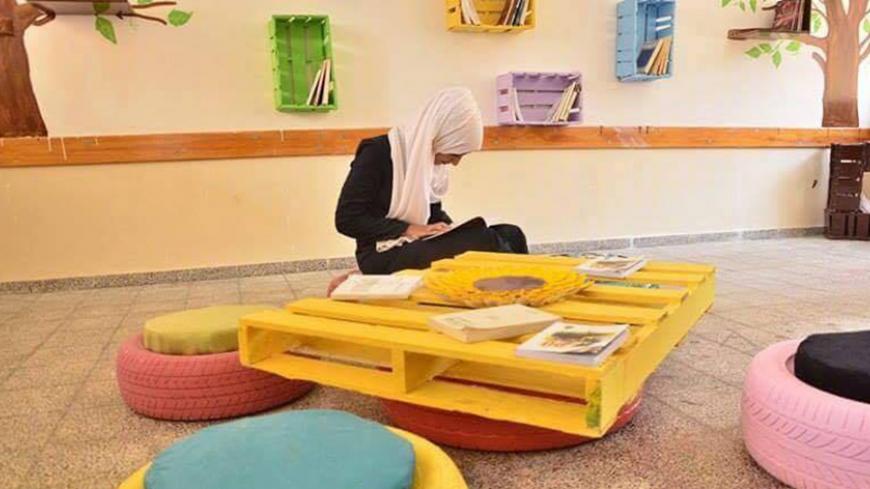 DEIR EL-BALAH, Gaza Strip — In an era where social media is the name of the game, people are no longer reading books in the Gaza Strip. But some young girls who believe that reading is an intrinsic part of education have provided a glimmer of hope by thinking out of the box in a bid to encourage reading. In late January, they began to establish a library using recycled books and other items.

The library was ready in early March, and it immediately started attracting passers-by. The library organizes several activities to lure students and others into reading. When it opened its doors, it announced a competition requiring people to read five different books on various topics and summarize them. Ten winners receive a collection of cultural, social, historical, literary and religious books.

Wahj Wa Fikr (Arabic for Glare and Thought) is the first library of its kind in the Gaza Strip and has no other branches for now. It was created by Al Nayzak Organization for Supportive Education and Scientific Innovation and is located in Al-Sokayna Bint al-Hussein Secondary School for girls located in central Gaza. This library is different from other libraries as it consists of recycled and disregarded items with the aim to declutter society and protect the environment. The library is a collection of valuable books that were piled up in houses and libraries and left unread. It is an attempt to breathe new life into those books.

Fidaa al-Sharif, an engineer from Al Nayzak Organization who oversaw the establishment of the library, told Al-Monitor, “During my visit to Al-Sokayna Bint al-Hussein, I found that there was no library at the school and that the girls were only relying on their curriculum books, so I got the idea of ​​creating a library within the school to help the girls improve their cultural and intellectual awareness. The library is also open to the public.”

Sharif, who is behind the creative design of the library, added, “I suggested the idea of ​​establishing a library to the school board and Al Nayzak, and it was welcomed. I wanted it to be original, not just like any other library in the Gaza Strip. Therefore, I created a new and distinctive design using simple items. I used old tossed items that society did not need and worked on recycling them. I also got books that were abandoned in libraries and houses and displayed them.”

“I wanted the library to encourage people to read, and I wanted to take advantage of old and damaged items. Along with several students at the school, I collected damaged wooden boxes, and we recycled and painted them so that they serve as bookshelves. We collected empty plastic bottles, crafted them into book holders, cleaned them and drew beautiful designs on them. We placed small novels and stories inside them so they look attractive,” she added.

Sharif pointed out that she wanted to avoid using the furniture used in other libraries, so she worked with her team to recycle and redesign damaged wood panels instead of resorting to tables. She collected old tires and recycled them in a nice and cozy way in order for the students to sit on them and relax while reading without feeling bored.

Sharif said that part of the initiative consisted of collecting hundreds of historical, literary, scientific and cultural books from libraries and houses and dusting them so that the students and library visitors could benefit from them. She noted that the library also offers fiction. Also, she said, visitors can borrow books from the library free of charge.

The engineer explained that she named the library Wahj Wa Fikr because she wanted it to be different from the libraries available in the Gaza Strip. She wanted to lure and educate readers and transmit a sense of comfort and tranquility through the glowing colors and nature-themed walls.

Sharif is seeking to create similar libraries in every school and public place to encourage people to read and break with the traditional libraries scattered across the Gaza Strip. She added that one of the things that she mostly observed in the library is the psychological and physical comfort provided by the atmosphere and the seats.

She said that reading leads to improved intellectual and behavioral skills among students, especially considering that the behavior of these students has been affected by the three Israeli wars on the Gaza Strip.

Marah Abu Misbah, a 17-year-old student from Al-Sokayna who contributed to establishing the library, told Al-Monitor, “I contributed a lot to the preparation of the library along with a team of colleagues, as I believe in the possibility of turning disregarded items into works of art. It was a difficult challenge, but not an impossible one. I wanted to leave a nice print in my school and be one of the contributors who helped establish this unique library.”

“The library construction project is one of the most useful projects set up in the school. The idea is to build a full-fledged library out of recycled wood and plastic and books that society does not need in order to attract the attention of everyone who visits the library,” she added.

The student said that what distinguishes the library the most is its exotic recycled content, the beautiful colors of the walls that soothe the soul and the cultural, literary and recreational competitions that are held on a regular basis to encourage visitors to read and keep visiting the library.

Rania Abdul Hadi, a 17-year-old student, told Al-Monitor, “I was not previously encouraged to visit libraries and read books, but I am now one of the most frequent visitors to this new library that features beautiful components such as shelves, benches and tables. There are also valuable books, attractive stories and exotic designs that keep us entertained.”

Abdul Hadi said the library books can be borrowed and read at home. Once done with the books, the borrower can fill out a small paper about the book and put the book summary on a panel in the library so that other readers could benefit.

For his part, Essam Siam, the general manager of cultural centers in the municipality of Gaza, told Al-Monitor, “The establishment of a library with a new and attractive design is encouraging people to read in the Gaza Strip. The library atmosphere is essential for readers who look for a beautiful and comfortable atmosphere, and this can be found at this library.”

He said that if all the Gaza Strip libraries are designed in the same way and carry out the activities that are carried out in this library, then the problem of lack of reading would be solved altogether.