The increase in the number of public libraries in the relatively stable areas controlled by the Turkish-backed FSA in the countryside of Aleppo reflects the development of various cultural activities. 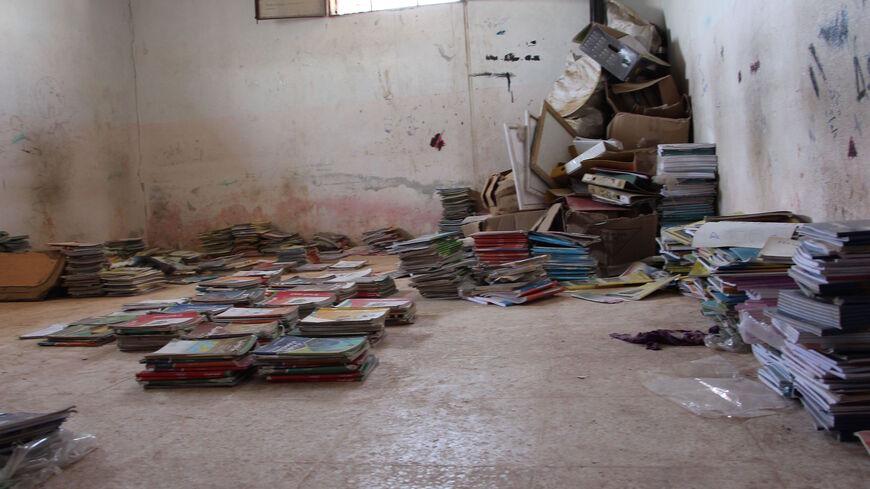 Books lie on the floor at a makeshift school in the town of Atme near the border with Turkey, in the rebel held Idlib province on Sept. 5, 2018. - IBRAHIM YASOUF/AFP via Getty Images

ALEPPO, Syria — The areas controlled by the Turkish-backed Free Syrian Army (FSA) in the countryside of Aleppo, in northwestern Syria, recently witnessed a remarkable cultural movement, manifested in the growing number of public libraries, initiatives and various cultural activities, such as book exhibitions, plastics art showcases, theatrical performances and other exhibitions for different age groups.

On April 23, the Syrian Rebel Youth Association inaugurated its public library at the association’s headquarters in the city of Azaz, north of Aleppo. This move aims to encourage young men, women and students to be more interested in reading and scientific research. The opening of the library took place on the sidelines of the association’s regular meeting in Azaz. It defines itself as a civil nongovernmental organization (NGO) working to reactivate and revitalize the civil status to recover the spirit of the revolution.

Mohammed Ibrahim, head of the Syrian Rebel Youth Association, told Al-Monitor, “The main purpose of opening the library is to encourage the youth to read and research, and to provide a space for reading. We want books to have a place in the lives of Syrians because this would help create an educated and conscious generation that can overcome the difficult stage and build a modern Syria. The library is a forum for the exchange of ideas and opinions between young men and women; we believe it will contribute to spreading the culture of dialogue and accepting other people’s opinions.”

He said, “The library currently includes 960 books on history, politics, science, civilization and archaeology, as well as some university research material and books on Arabic language and literature. The library also has a reading room that allows anyone to sit in it and read whatever they want. We are now discussing establishing a mechanism for lending books.”

Speaking about where the books came from, Ibrahim explained, “The books were collected in cooperation with members and friends of the association. The books are entirely individual contributions since the Syrian Rebel Youth Association is financially independent and does not receive any support from internal or foreign bodies. Our expenses are covered by the monthly subscriptions of our members.”

Bassam Rahim, deputy head of the Syrian Rebel Youth Association, told Al-Monitor, “Building individual tools and skills for young people cannot only be achieved by reading and research. Young people need various cultural, political, social and literary activities, and others focused on beauty, creativity and art. This is what the association strives to implement by creating the appropriate environment for that through the various actions and activities that it will undertake during the coming period.”

Rahim said, “The association was established on Oct. 10, 2016. We now have 200 members, most of whom are young men and women who support the Syrian cause and the goals and values of the revolution. The association has organized many cultural events in the presence of many influential opposition figures.”

Mohammed Baqai, a researcher at NMA for Contemporary Research, an independent organization that provides specialized studies and consultations in the scientific field, based in the countryside of Aleppo, told Al-Monitor, “There is a direct relationship between cultural activity and stability in opposition-held areas. As the index of stability and calm rises, cultural movement increases.”

Speaking about the public libraries in opposition areas, Baqai said, “The library established by the Syrian Rebel Youth Association in Azaz is not the first. Many libraries have emerged over the past couple of years in major cities, such as al-Bab and Azaz. For example, NMA for Contemporary Research has a library full of books, the University of Aleppo affiliated with the opposition in Azaz has opened a library as well, and so has the International Sham University in the countryside of Azaz.

Baqai added, “The cultural movement in the area is not limited to the libraries and encouraging the youth to read more; there is also a remarkable interest in theater, painting exhibitions, literary and poetry evenings. I believe that the cultural movement is heading in the right direction, but we hope that it will receive greater support from the authorities, such as the opposition’s interim government, for instance.”

In late 2019, the University of Aleppo affiliated with the opposition announced the opening of the university library, which includes 7,000 books of various academic specializations, after a six-month funding campaign to secure the books. Besides, several school and university libraries were opened in the FSA-controlled areas with the support of the Turkish government.

Abdul Aziz al-Daghim, president of the University of Aleppo, told Al-Monitor, “The university contributes to cultural activities in the area, and backs efforts aimed at spreading public libraries to popularize the reading habit among Syrians. The university also supports [writing] books. For example, a month ago we held a book signing ceremony for author Walid al-Nayef, which was titled ‘Whiffs from Palmyra Prison.’”

He noted, “I encourage students at the university to go to the university's library and expand their scientific and literary specializations.”

Speaking about how the university secured the books for its library, Daghim said, “We contacted 10 study centers and universities in Turkey, Tunisia, Egypt and Qatar, and they donated a large number of books for the library, and many have promised to send more books soon.”

On July 25, 2020, the Qeam Foundation, an independent educational NGO in the city of al-Bab in the countryside of Aleppo, announced the opening of Raqem Cultural Cafe, which has an extensive library and provides other services such as an internet connection for online research, quiet reading corners and rooms for discussions and cultural seminars.

She added, “The cafe's turnout is excellent, especially among young people, particularly university students who want to gain more knowledge and benefit from books in their university research.”

Speaking about the challenges the cafe faces, Shalar noted, “We had some issues in obtaining more books to enrich our library.”