Restaurants are opening at a high speed in opposition-held areas in the Aleppo countryside, making it tempting for capital owners to invest in this relatively safe service sector. 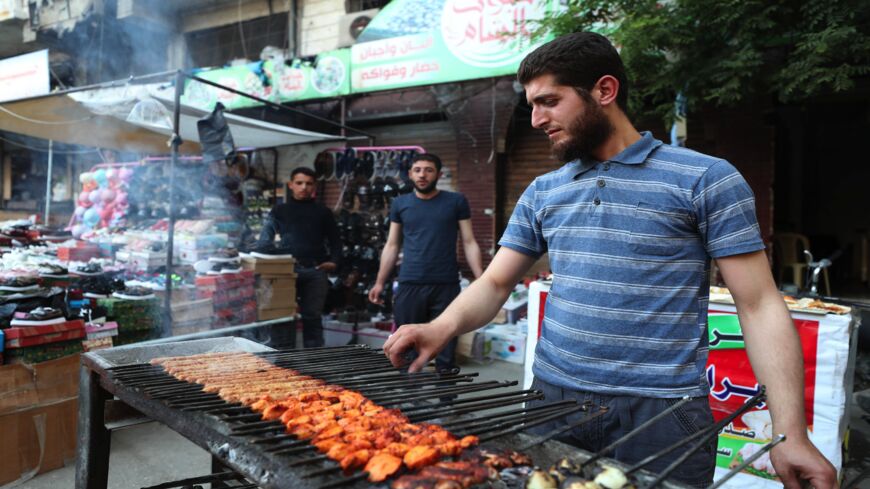 A man grills skewers outside a local restaurant along a market street in Ariha in the southern countryside of Syria's Idlib province before sunset during the Muslim holy fasting month of Ramadan on May 15, 2020, as people who had fled advancing government forces months earlier return to the town. - OMAR HAJ KADOUR/AFP via Getty Images

ALEPPO — During the past two years, the number of restaurants serving a variety of dishes to their customers has significantly increased in the opposition-held areas in the Aleppo countryside in north Syria. Opening restaurants as an emerging investment sector in an area considered relatively stable constituted a tempting opportunity for Syrians who have money and are striving to grow their wealth. This is due to several incentives and success factors.

Al-Monitor visited several famous restaurants in al-Bab and Azaz in the Aleppo countryside and met with restaurant owners and employees. Several frequenters of the restaurants talked to Al-Monitor, which asked them about the quality of the meals, variety and prices, as well as the special services offered to customers.

Mohammed Kanou, manager of the Bawabat al-Madina restaurant in Azaz, told Al-Monitor, “We serve mostly red meat meals, specifically Awassi lamb meat, grilled meat, and chicken like taouk (marinated chicken) and kebab. All these are popular Syrian dishes that people love because they are tasty and well-grilled. We have 150 customers daily, which is a good number. The profit is reasonable, and it is a good investment project.”

At Bawabat al-Madina, Al-Monitor met with Ridwan Ahmed, one of the restaurant’s customers. “I ordered a kebab meal for one person, and I paid 10,000 Syrian pounds ($2.5), which is a reasonable price because the meal is delicious, and the place is spacious and warm,” he said.

One of the branches of the Kabso restaurant chain is located opposite al-Jamal roundabout at the western entrance of Azaz. There is a wide space in front of the restaurant for cars to park for free. The restaurant’s facade is distinctive and clean, and the restaurant area is over 200 square meters. The owner of the Kabso chain, Ahmed Kabso, told Al-Monitor, “The chain has three branches: in Azaz, Afrin and al-Salameh village, close to Bab al-Salama border crossing with Turkey, north of Azaz.”

Kabso added, “We serve 40 types of Eastern and Western foods and grilled items of all kinds, from mansaf (lamb cooked with yogurt and rice) to shawarma, hamburger, Mexican, kibbeh (meat and burghul), fajitas, broasted [chicken] and other foods.”

He noted, “Our restaurant in Azaz is open daily from 9 a.m. until 3 a.m., and it receives throughout the day more than 500 customers.”

On a daily basis, a large number of University of Aleppo students in the opposition held areas affiliated with the opposition come to the Kabso restaurant branch in Azaz. The university campus is located 500 meters from the restaurant, and the meals seem cheap compared to the rest of the restaurants, in addition to the distinctive service and the beautiful decor, which explains the high turnout.

Nidal Najjar, a customer at Kabso and an economics student at the University of Aleppo in the opposition held areas, told Al-Monitor, “A chicken meal for one person in a Kabso restaurant costs 6,000 Syrian pounds ($1.5), the quantity of the meal is good, and the presentation is amazing to the extent that you are tempted to take selfies with it. But it is pricey for a university student who does not have a source of income.”

Mamoun al-Khatib, a journalist and the director of Shahba Press Agency, a media site affiliated with the Syrian opposition in the Aleppo countryside, told Al-Monitor, “Several factors have led to the success of restaurants in the region, notably the high population density that contributed to the increase in the number of restaurant visitors. This encouraged some investors to enter this sector and invest their money in it. Besides, the diversity of the population in the area that accommodates displaced Syrians from various Syrian governorates has led to a variety of food to encourage competition between restaurants.”

Kanaj restaurants in Azaz's city center serve a variety of foods. The restaurant is owned by a displaced person from the town of Qalaat al-Madiq in the northwestern countryside of Hama. He and his family arrived in Azaz in 2019 after Syrian regime forces took control of his town. Ahmed Abdullah, the director, told Al-Monitor, “We serve 45 types of meals, and the restaurant employs 25 workers and provides home delivery service.”

Alolo is among the most famous restaurants in the city of al-Bab in the Aleppo countryside. It offers a wide variety of Western and Eastern meals.

Restaurant investors in both al-Bab and Azaz face many challenges, such as poor kitchen expertise. Ibrahim Jabban, a restaurant customer from al-Bab city, told Al-Monitor, “Several restaurants in the area lack experience, and there is an absence of chefs with extensive experience commensurate with the high customer turnout to restaurants due to the immigration of skilled workers because of the war.”

Investors are trying to rely on and train the available staff in the region to face this obstacle. Meanwhile, cooks and restaurant owners are forced to make their own marinades by importing raw material and spices from Turkey in light of the closure of crossings between the regime-controlled areas and those under control of the opposition.

Abdel Hakim al-Masry, minister of finance and economy in the Syrian opposition's self-styled interim government, told Al-Monitor, “One of the reasons for investing in restaurants is the low capital required to open them. With the increasing production costs in opposition areas, opening any project now requires huge capital for individuals. The majority of individuals find in restaurants an investment opportunity that does not require a large sum.”

Yahya Al-Sayed Omar, a freelance economic researcher who opposes the regime and resides in Istanbul, told Al-Monitor, “Investing in restaurants does not require much experience. Any person can easily enter this field. Besides, the low level of income has led to a general weakness in the overall demand in the region, so there is no room for any new investment. The purchasing power of individuals does not allow them to consume. Any project involves a great marketing risk, while restaurants do not suffer from these marketing risks. The need for food is at the first rungs of human needs, and it is indispensable."