Recreational facilities are being established in the Euphrates Shield region controlled by the Free Syrian Army amid relative stability. 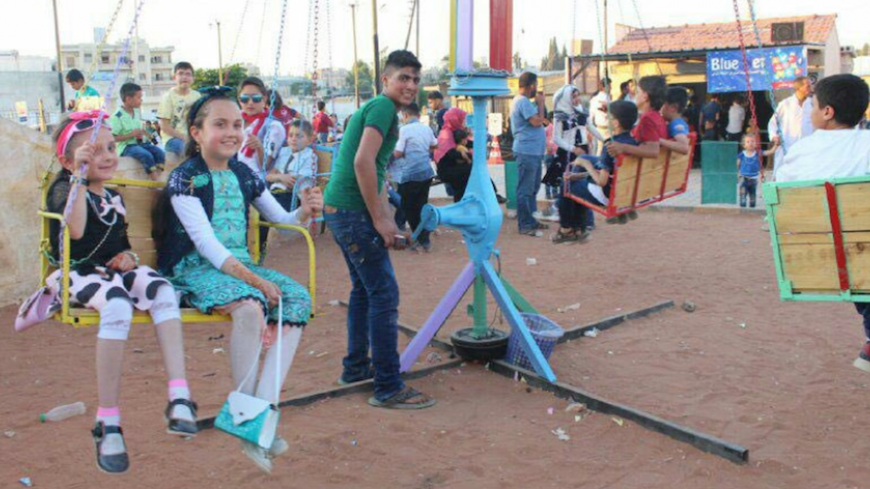 AZAZ, Syria — After years of war, life is returning to a large area of Aleppo province. Restaurants and resorts have opened to provide dining and recreational services to longtime residents and thousands of displaced people following the expulsion of the Islamic State (IS) under Turkey's Operation Euphrates Shield; the businesses are also providing provided seasonal employment opportunities.

The region in question, controlled by the Free Syrian Army (FSA), represents just over 12% of the total surface area of Aleppo province. It includes major cities, each with a population of more than 100,000 — such as Azaz, al-Bab, Jarablus, Marea and al-Ghandoura — in addition to dozens of villages and towns.

Abdel Rahman Mohamed and his wife have been visiting the Pizza House in Azaz once a week since the establishment opened in early June. The couple spend a quiet evening in the restaurant's family section, enjoy a delicious pizza, drink hot or cold drinks and smoke a hookah — all for around 4,000 Syrian pounds ($7.75).

Mohamed, 28, left his home in al-Kalassa neighborhood in Aleppo city in May 2016 before Bashar al-Assad's regime launched a military operation in September 2016 to recapture eastern Aleppo from the opposition. Mohamed and his wife now live in Azaz.

“My wife and I love going to the Pizza House,” Mohammed told Al-Monitor. “This weekend getaway is a breath of fresh air that provides us with the energy we need for the upcoming week. We can relax and forget all about our heavy burdens and displacement. It eases our longing for our neighborhood and home in Aleppo. The Euphrates Shield region — specifically Azaz — is coming back to life. Recreational and services facilities are established to provide entertainment to the people."

The Pizza House is not the only service business in the city to open after the expulsion of IS by the FSA and with the support of Turkish forces; five other newly opened facilities are serving customers on the outskirts of the city among olive and cherry trees. One is al-Baaj resort, which has a large swimming pool, soccer field, fast food restaurant, games room and wedding hall. The other four venues, located in parks with swimming pools and cafes, are private enterprises established by longtime residents of the region and by displaced Syrians.

Mohammed Hanzal, the head of the information office of Azaz's local council, confirmed that the development of this services sector in the Euphrates Shield region is not limited to the city of Azaz. He told Al-Monitor, “Similar facilities have been established in Marea, al-Bab and other towns. This sector attracts the youth and is growing at a steady pace in light of the calm and stability in the region. The battles have stopped since Turkey announced the end of Operation Euphrates Shield after the expulsion of IS.”

He added, “This emerging services sector has allowed residents to find a place to relax. The pools have attracted large numbers of children and youths in the past two months due to the extreme heat in the region. These pools usually offer additional services to their customers such as free internet access and drinks, and entertainment such as billiards and computer games. All of these services are offered at an average price of 2,500 Syrian pounds [$4.80] per person.”

During the war, recreational facilities in areas controlled by the opposition in Aleppo closed due to a lack of customers who were having a hard time making ends meet and chose to take shelter in their homes from the shelling.

At present, the Euphrates Shield region is experiencing relative stability and residents and displaced families are seeking leisure activities.

Mahmoud Abbas owns a cafe on the banks of the Euphrates River near the city of Jarablus. He told Al-Monitor, “Customers are flocking to my cafe and the neighboring restaurants and coffee shops. Many young people and families come here to have a nice time and enjoy the pleasant atmosphere and nice weather near the river. Most visitors come to swim in the river and they pass by the cafe to enjoy a quick meal such as falafel or pancakes with a cold drink.”

The Euphrates Shield region stretches about 10 kilometers (6 miles) along the western bank of the Euphrates River from the north of Jarablus all the way to the outskirts of Manbij in the south. The residents of the countryside of Aleppo head to the Euphrates River’s western bank controlled by the FSA to take walks and enjoy their time in the cafes and restaurants that have opened there.