The Turkish-backed opposition refrained from receiving displaced persons from the areas controlled by the Syrian government and opened fire on those who protested. 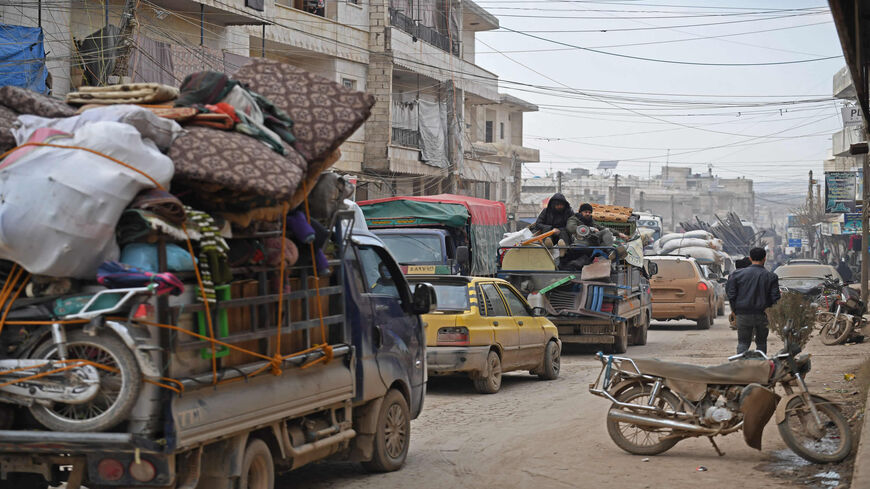 Vehicles carrying internally displaced persons and their belongings drive through the town of Atme near the Turkish border toward the city of Afrin, as people flee advancing Syrian regime forces in Idlib and Aleppo provinces, Syria, Feb. 17, 2020. - Rami al-Sayed/AFP via Getty Images

Three buses carrying internally displaced persons (IDPs) from the town of Um Batna in the countryside of Quneitra arrived May 22 at the Ghazawiya crossing between Afrin and the Idlib countryside, before heading to the Deir Hassan area in northern Idlib, which is under the control of Hayat Tahrir al-Sham (HTS).

This happened two days after the Second Legion affiliated with the Free Syrian Army (FSA) prevented the convoy from entering the Turkish-backed opposition-controlled areas in eastern Aleppo, upon its arrival at the Abu al-Zendin crossing west of the city of al-Bab on May 20, claiming that there was no coordination between Turkey and Russia to sponsor this displacement. The convoy was accompanied by the Syrian government-affiliated Red Crescent and the Russian forces, after a trip that took about 12 hours from Quneitra.

On May 21, the FSA-affiliated Sultan Murad Division assaulted protesters at the Abu al-Zendin crossing who were demanding that the IDPs enter the eastern countryside of Aleppo.

Meanwhile, activists criticized the opposition forces’ inability to bring the IDPs into their areas of control without Turkish approval, noting that preventing them from crossing and leaving women and children out in the open under the pretext they may pose a threat are useless security measures by the opposition.

Malik Abu Obida, a correspondent for Halab Today TV in the city of al-Bab, told Al-Monitor, “The officials at Abu al-Zendin crossing cited the Turkish refusal for the IDPs to enter, due to the absence of prior coordination between Turkey and Russia, in addition to the lack of coordination between the displaced and those in charge in northern Syria. But this is not true, and there was coordination 48 hours before the convoy headed north; the IDPs received promises from those in charge of the crossing to bring in the displaced. However, the situation developed into civil disobedience at the crossing amid false promises and delays, so the faction stationed at the crossing opened fire on civilians and attacked several activists, myself included.”

He noted, “After that, those in charge of the crossing announced that the convoy’s entry had been approved and began the crossing procedures, such as taking the personal information of each individual and giving them PCR tests. The IDPs then headed to the Ghazawiya crossing that separates the areas controlled by the FSA and those controlled by HTS, accompanied by Turkish military vehicles."

Abu Obida added, "The convoy’s destination was not Idlib governorate; the displaced were going to enter al-Yazidia area near the city of al-Bab, which prompted locals to prepare places for their accommodations, aid and sums of money. But minutes before the convoy entered, we learned that the Turkish authorities decided to direct the buses to Idlib. Everyone was shocked to hear that the HTS-affiliated Syrian Salvation Government immediately announced its readiness to receive the displaced, which indicates the existence of prior coordination between Turkey and HTS.”

Al-Monitor tried to contact the Abu al-Zendin crossing management, to find out why the IDPs were initially prevented from entering, but to no avail. The Turkish side has also not issued any official statement about the situation.

Meanwhile, one of the displaced from the convoy told Al-Monitor on condition of anonymity, “We knew that Abd al-Majid al-Faris, head of the Free Provincial Council of Quneitra based in Azaz, had informed the [opposition self-styled] interim government and the governor of Aleppo three days before our convoy took off. The Russian side told us that the entry would be through the Abu al-Zendin crossing and it contacted the local council in al-Bab, which expressed its willingness to assist and prepare the necessary accommodations and logistics. This is evidence that all parties knew about our arrival and there was indeed prior coordination.”

He added, “On May 20 tension broke out between the convoy and the Russian delegation accompanying it, after its arrived in Homs. The accompanying Russian delegation refused to hand over two young men who were part of the displacement deal. We threatened them to cancel the deal and initiate disobedience inside the buses if the young men are not immediately released. So the Russian Military Police was forced to hand over one of them to his family, but postponed releasing the other for two days until we arrived at the Abu al-Zendin crossing.”

Tension had prevailed in the town of Um Batna on April 30, following clashes between the locals and the government forces at a checkpoint. In response to this escalation, the regime forces forcibly displaced the locals the following day, after targeting them with mortar shells, without causing any casualties. On the same day, the people returned to the town, for negotiations to take place between the notables of the town and officers of the government forces headed by Brig. Gen. Talal al-Ali, head of the Sassa Branch in the Syrian military intelligence.

An agreement was reached May 15 to expel 34 families of former fighters (about 150 people) from the town, toward northern Syria, in addition to releasing two young men, in exchange for not raiding the town.

Mustafa al-Mustafa, a researcher at NMA for Contemporary Research who lives in Azaz, told Al-Monitor, “If Russia is unable to achieve security stability, the Syrian regime will resort to deporting opponents from its areas of control toward northern Syria. Turkey has refrained from receiving the displaced because it wants to limit these displacement operations, given the high population density in its areas of control, the lack of direct coordination with Russia, in addition to the security aspect that Turkey fears fighters with unknown affiliations will enter its areas of control.”