Since the cease-fire agreement entered into force in Idlib last month, tens of thousands of internally displaced have returned to their towns in Idlib countryside, but those wishing to return are facing difficulties at the crossings run by Hayat Tahrir al-Sham. 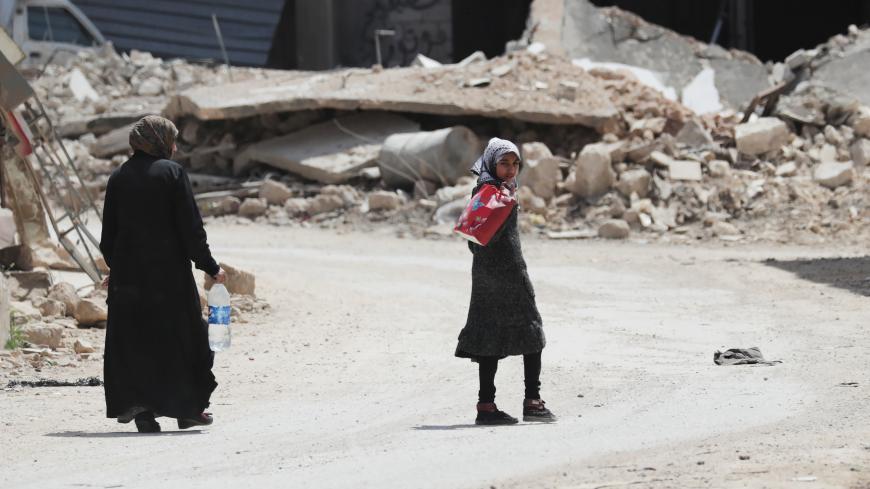 A girl holds a bag as she walks near the rubble of damaged buildings in the rebel-held town of Nairab, Idlib province, Syria, April 17, 2020. - REUTERS/Khalil Ashawi

ALEPPO, Syria — The Syrian Response Coordination Group (RCG), a humanitarian nongovernmental organization assisting the displaced in northwestern Syria, issued May 4 a statement reporting the return of about 234,600 internally displaced persons (IDPs) to their towns and villages in the countrysides of Aleppo and Idlib, which are far from the contact lines with regime forces. This number was recorded between the start of the implementation of the cease-fire on March 6 and May 4.

Mohammed al-Hallaj, director of the RCG, told Al-Monitor that his group “documented 273 violations from the Syrian regime forces since the cease-fire was implemented more than a month ago. [Regime forces] have used artillery and missile shells as well as drones.”

Hallaj called on “the international parties concerned with Syria to enforce the cease-fire in the country’s northwest and end the ongoing violations to facilitate the return of thousands of displaced.”

Dozens of displaced Syrians demonstrated April 23 in front of the Ghazawiya crossing near the city of Darat Izza, in northern Aleppo. The crossing connects the Turkey-backed armed opposition areas in the northern Aleppo countryside to areas in Idlib, in northwest Syria, controlled by Hayat Tahrir al-Sham (HTS), which was designated a terrorist organization by the United States and the United Nations Security Council in 2018. International sanctions were imposed on the organization.

Protesters want to proceed to their towns in Idlib countryside and are calling for the abolition of tolls demanded by those in charge of the crossing. The protesters condemned the practices of HTS and decried the risks they run as a result of the poor organization at the crossings.

On April 16, the Crossings Department of the HTS-affiliated Syrian Salvation Government in Idlib, announced in a statement the reopening of the Deir Ballut crossing between the northern countryside of Aleppo and Idlib province in order to allow IDPs to return to their towns in Idlib countryside. They were displaced during the past months due to the military operations launched by the Syrian regime forces.

In the same statement, HTS said the Ghazawiya crossing would open for commercial trucks carrying goods, but not for IDPs.

In line with the measures aimed at stemming the spread of the coronavirus, the Crossings Department had announced March 30 the closure of all crossings between Idlib and Aleppo countryside and banned civilians from using such crossings between April 1 and April 15.

Mahmood Talha, a journalist who is based in Aleppo countryside and who works with Thiqa News Agency, a local opposition network, told Al-Monitor, “HTS imposes taxes on displaced people wishing to return to their towns in Idlib countryside and delays their journey by imposing lengthy inspection operations. The displaced are risking their lives due to the absence of any measures aimed at preventing the coronavirus pandemic. Hundreds of people are gathering in front of the crossing on a daily basis as they wait for their turn to complete their journey.”

The obstacles that HTS has imposed and the frequent closures of the crossings since the beginning of April have deepened the suffering of the displaced, put them at risk and delayed their return to their areas in Idlib countryside.

Tens of thousands of IDPs have started returning to their towns after the fighting in Idlib stopped and relative calm prevailed following the cease-fire agreement in Idlib province that Turkish President Recep Tayyip Erdogan and Russian Vladimir Putin concluded March 5. The cease-fire came into effect March 6.

In a statement issued April 16, the RCG called on the displaced returning to their homes to be cautious during their journey and watch out for any remnants of war and destroyed buildings that could collapse.

The organization called on humanitarian organizations to work on resuming their activities in the areas that have begun to see the return of IDPs and to provide basic services. On April 20, the RCG released statistics documenting the return of 36,267 displaced families to their villages and towns in the countrysides of Aleppo and Idlib.

RCG manager Mohammad Hallaj told Al-Monitor, “The cease-fire in Idlib encouraged thousands of displaced families to return to their towns in Idlib countryside from their areas of displacement in the northern countryside of Aleppo. However, the difficulties they face at the crossings are marred by the daily breach of the cease-fire on the part of the regime forces. Such breaches seem to be intentional and aimed at preventing the return of the displaced to their homes, forcing them to stay away from their areas. We call on the international community to assume all its responsibilities toward civilians in northern Syria, and we blame the regime forces and their supporters for any new military escalation.”

Al-Monitor met with a number of families who had been waiting to cross from the Deir Ballut crossing in the northern countryside of Aleppo toward Idlib.

Abu Mustafa, from the countryside of Jisr al-Shughour, in southwest Idlib, has a family of 10, all of whom were sleeping on the floor near the crossing as they waited for it to open. “My family and I have been waiting for the crossing to open ever since sunrise. It is such a great hardship given the lines. We tried to arrive early to enter quickly, but there were many cars in front of the gate and people are slowly allowed in amid unnecessary security measures. Let's go back to our homes. Enough suffering,” he told Al-Monitor.

Mahmoud Ibrahim, an IDP from the city of Arihah in southern Idlib, was waiting with his family of five. “Life far from home is tantamount to a catastrophe, to humiliation, oppression and suffering. I want to return to my city, to my neighborhood, friends and family. Enough of the displacement,” he told Al-Monitor.

“I rented a house with my family for $80 in the city of al-Bab in northeast Aleppo and throughout our displacement I was unemployed. The living expenses alone are a catastrophe and the rent I am required to pay on a monthly basis made things worse. Returning home is better and spares me, to say the least, an amount of $80 per month,” he noted.

Ibrahim added, “We will return to our house and start repairing it. Most of the houses that were not destroyed during the bombing have no doors or windows. My house is partially destroyed but it will be easy to repair it. What’s important is for the cease-fire to hold for a long time,” he added.

Salwa Mahmoud, a mother of three from the eastern Idlib countryside who lost her husband, told Al-Monitor, “I will return to my house. I have a lot of expenses and living in a tent is no piece of cake.”

“Do you know that we have to pay more than 100,000 Syrian pounds [$195] to move from the countryside of Aleppo to our town in southern Idlib? And the truck driver will ask us for more if the wait is long at the crossing. Those in charge of the Deir Ballut crossing do not fear God,” she said.